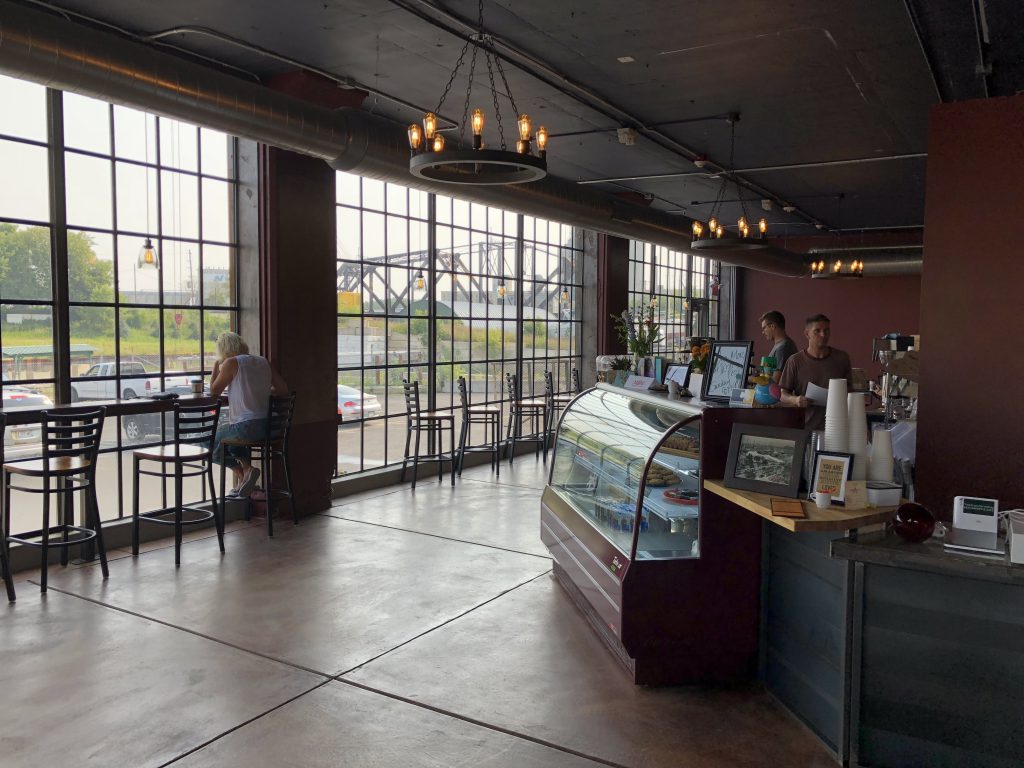 A gluten-free bakery named MOR Bakery and Cafe opened quietly last week in Bay View. The new bakery and cafe, located at 2018 S. 1st St., offers a variety of homemade baked goods without a grain of gluten, along with Anodyne coffee products and herbal tea.

The venue has a unique style, in that it’s located in a warehouse building on the South Side. Once you walk inside, however, the new cafe shows a quaint and rustic look. Although the large open space is still reminiscent of a warehouse, the interior is well-finished and creates a different kind of cafe.

“I’ve always wanted to make a place where you just want to come, and sit, and be,” says owner Traci Morgan-Hoernke, noting somewhat apologetically that the space is still a work in progress…

Some items, like the gluten-free rice krispie treats, will taste familiar and comforting. Other items, like Morgan-Hoernke’s take on Swedish almond cake with lingonberry jam topping, are more unique.

The bakery’s items are said to be much more affordable than at the typical vegan spot: most single bakery items will run you $2, and larger items like loafs of banana bread run around $5. Morgan-Hoernke says her goal is to serve not only those who are vegan or allergic to gluten, but anyone looking for bakery with high-quality ingredients. 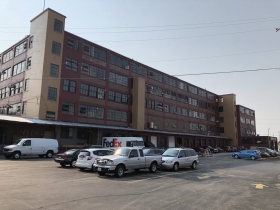 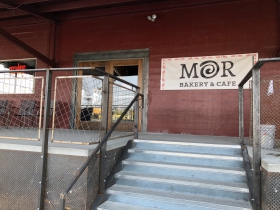 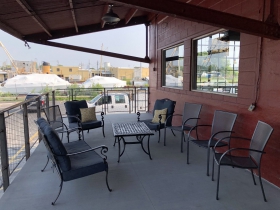 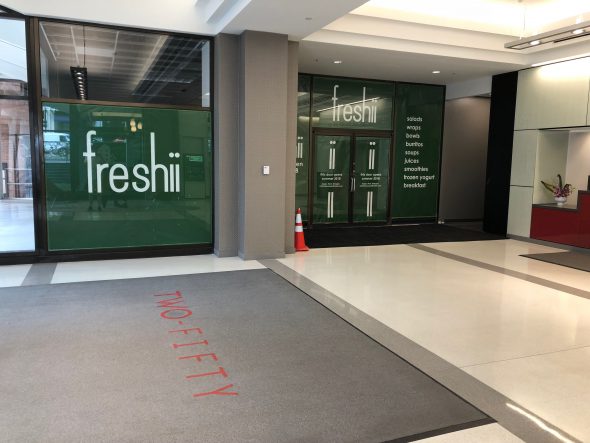 A new “health-casual” restaurant chain, Freshii, has signs up at it planned location downtown. The health food chain’s signs are posted at 250 E. Wisconsin Ave., on the ground floor of the 250 Plaza, and the place is expected to open in October.

Although the restaurant was projected to open back in July, that’s been moved back to a Fall opening. The franchise’s owner, Andy Tran, will opening the first Freshii in the city. The chain boasts more than 300 locations around the world, including in North and South America, Europe, and Australia.

Freshii MKE is now projected to open in October, according to Michelle Adams, a senior brand manager at Freshii…

Tran found that his “personal and professional values,” aligned with the company’s focus on health and wellness, especially since he comes from a background in healthcare.

“We believe Milwaukee is lacking quick, healthy, and affordable options like Freshii so Andy decided to bring Freshii’s mission to Milwaukee,” says Adams.

Adams also described the new restaurant as fast enough for the busy lives of people downtown, but healthier than other fast food options.

The company that makes those delicious and uniquely flavored popsicles for events around Milwaukee has finally settled down, and will hold a grand opening of its new permanent location on August 18.

Pete’s Pops, which previously rented a space at 2020 W. Wells St., is debuting their new walk-up location at 3809 W. Vliet St. The new venue offers a large window on the storefront, so customers can walk up and order popsicles, much like a good old-fashioned ice cream truck.

Pete’s Pops was founded in 2014 by Pete Cooney, and Molly Dill from BizTimes has more on how the company found its new home:

After winning Near West Side Partners’ Rev-Up MKE small business competition and the $10,000 prize in 2016, Pete’s Pops founder Peter Cooney committed to opening a storefront in the Near West Side Neighborhood. It originally planned to open its storefront this past spring, but the project was delayed…

The building has been vacant for years, and needed a complete renovation, Cooney said. It now has a large walk-up window with a roll-up garage door and a bar top, a five-foot sign in the shape of a popsicle, colorful block glass on the exterior and other updates.

The grand opening will last nearly all day this Saturday, from noon to 8:00 p.m. Once open, the popsicle shop will be open regularly on Saturdays and Sundays until the end of September, according to Dill. 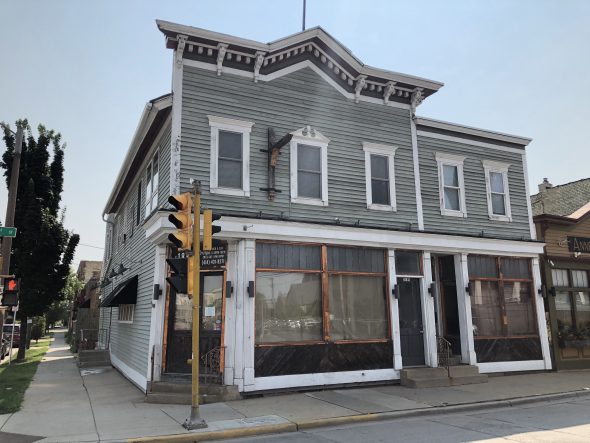 An application for a new restaurant and tavern license was submitted to the city of Milwaukee last week, to open a new venue named Don’s Diner in Walker’s Point as Urban Milwaukee reported. The application was by Aaron Gersonde, one of the operators of Stand Eat Drink.

Although not much information has been released on the style or cuisine of the proposed restaurant, the application included a license to sell alcoholic beverages as well.

The team at Stand Eat Drink owns a few other venues in Milwaukee, including Movida, Bodegan, and Vermuteria 600. But Gersonde’s application for Don’s Diner shows he will hold 100 percent ownership interest for the new restaurant.

“My goal is really to connect Jake’s to the neighborhood it sits in and help revitalize the area,” he says.

The deli will undergo a few changes under DeShazer. To start off, he will be working with a new manager that is being brought in. They will also be working on bringing back table service within the next few weeks, as well as catering in the near future…

Jake’s will be hosting a backpack drive that will double as a block party on August 26. The deli will give away 1,000 backpacks in partnership with the Boys and Girls Club for anyone who is in need of school supplies, lasting from 11:00 a.m. to 2:00 p.m.

Cloud Red, the Shorewood bar on 4488 N. Oakland Ave., is introducing its new enclosed patio with a twist: you’re allowed to bring your own food.

The bar, which does offer a selection of bar food like burgers, nachos and tacos, figured it would try something new with the opening of its cozy outdoor addition.

OnMilwaukee’s Lori Fredrich has more on the new patio concept:

The charming neighborhood bar has recently added an adorable new fenced in patio behind the restaurant that comes complete with festoon lights, picnic tables, tasteful potted plants and a fire pit for cool nights…

As the bar noted this weekend on Facebook, their tiny kitchen is not equipped to cater to the additional demand created by extra patio guests. So, they’re inviting guests to provide their own.

Of course, you can still enjoy drinks from the bar on their patio, but for now, the food is on you.

A popular pizzeria in West Allis has announced plans to move down the street into its own building. Pizzeria Scotty, known for its Chicago-style pizza and classic Italian favorites, is preparing to relocate to its own building located at 9022 W. Oklahoma Ave.

The carryout restaurant is currently operating in a small strip mall on the same street, at 9809 W. Oklahoma Ave., but owner Travis Puschnig has been longing for a larger space to continue the restaurant’s operations.

Owner Travis Puschnig said the pizzeria is “busting out of the seams,” at its current home…

“We just need to relocate, get a little bit more square footage,” he said. “It will be better for us working-wise…”

The purchase of the property where the restaurant will move is in progress. The building was previously a travel agency and is located near the fine-dining establishment Caterina’s Ristorante.

Puschnig also said the restaurant will continue with its same style of carryout and delivery orders, but hopes to see dine-in options somewhere in the future.