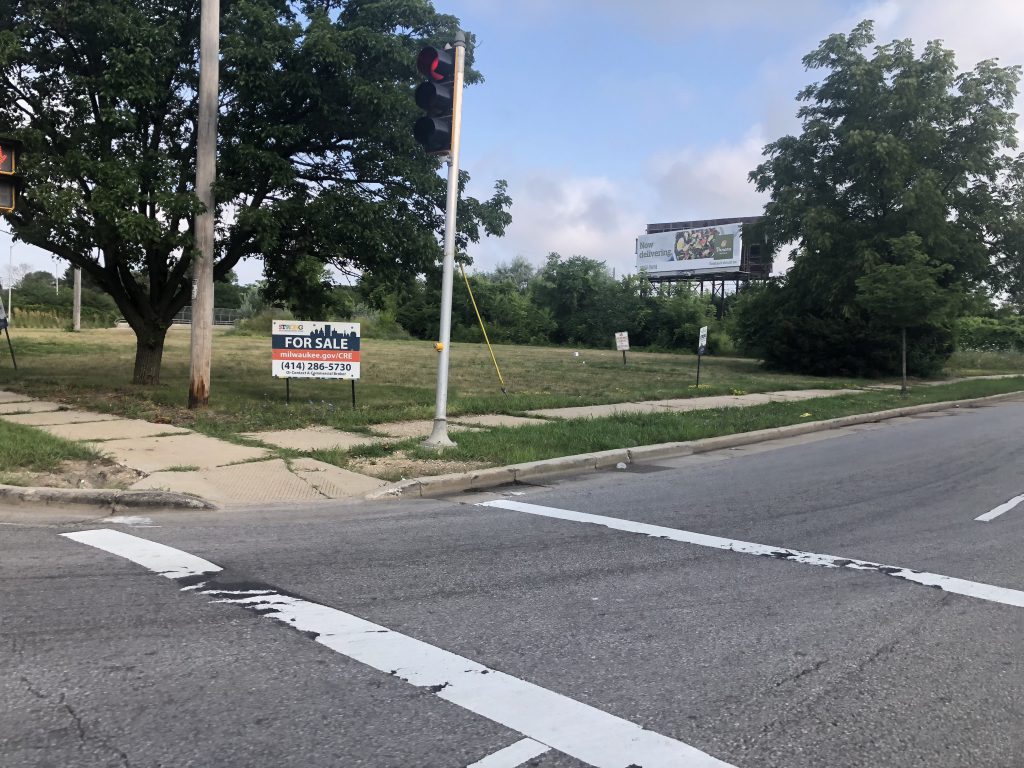 Development in Bronzeville has been trending positively in recent years. Several projects aimed at revitalizing the neighborhood commercially and culturally have come to fruition.

It was reported this week that one-acre, city-owned lot near the freeway is being marketed for sale. Corrinne Hess of BizTimes reported that any number of things could go in according to the city’s RFP.

“Acceptable uses of the property, according to the RFP, include: a boutique hotel, a conference center with banquet hall and/or catering component, a mixed-use development with first floor retail, a theater with an open plaza, or uses that contribute to or exemplify the existing Bronzeville Cultural and Entertainment District,” she wrote.

Milwaukee Business Journal reporter Sean Ryan covered the sale as well. “The property is coming on the market now partially because Bronzeville efforts are starting to bear fruit,” wrote Ryan. The best example is the large project encompassing the Griot apartments, Garfield Street School redevelopment and the reopening of America’s Black Holocaust Museum. A number of other projects are in the works, including an apartment building and medical clinic, the redevelopment of the Reader’s Choice building and long-term possibility that the streetcar will extend into the neighborhood.

In June, at a ribbon cutting for the Griot, Jeramey Jannene quoted Department of City Development Commissioner Rocky Marcoux calling the period in time, “an incredible inflection point,” for the neighborhood and city.

The reopening of the museum has been especially lauded for its cultural significance not only to this neighborhood and this city, but for the country, as the local alderwoman Milele A. Coggs was quoted saying in June, “There is no greater time than now for the resurgence and reemergence of America’s Black Holocaust Museum.”

In November 2016, Coggs said the Garfield School and ABHM project would hopefully lead to future development.

In her press release announcing the RFP for the vacant land, Coggs called the parcel a gateway to the neighborhood.

It’s certainly a significant parcel. This site could be the neighborhood’s pearl. Whatever development occurs at the site will have the opportunity to signal visitors that they are entering Bronzeville.

Still, even with all this good news for Bronzeville, some are still worried about gentrification in the neighborhood. In November 2017, Elliot Hughes covered a community meeting discussing streetcar extensions into Bronzeville and Walker’s Point for the Neighborhood News Service.

As Smith reported, a consultant working on the streetcar land-use study for the city told the crowd that Bronzeville has had a low population density, and increased development would likely change that.

But if the recent development in the neighborhood is any sign of what may come, gentrification is not the first thing that comes to mind. With the success of locally-owned businesses like Pete’s Fruit Market and Gee’s Clippers, and the affordable housing component of the Griot project development, the projects thus far have not been thoughtless in this regard.

But I, like many others, am hoping whatever comes to the land being marketed now will follow suit.

Jannene called the selection of the sites a clear win for the city, and reported that some city insiders think the RFP process was likely designed the guide the state to the one at N. 27th St. and W. Wisconsin Ave.