Citizens value schools over tax cuts but Republicans have done just the opposite.

By Tamarine Cornelius, Wisconsin Budget Project - Jul 10th, 2018 01:16 pm
Get a daily rundown of the top stories on Urban Milwaukee

Wisconsin voters would much rather increase spending on public schools than reduce property taxes, according to a recent poll. Yet Wisconsin lawmakers have taken the state in a different direction by choosing to cut taxes, particularly for the wealthy and well-connected, rather than restore budget cuts made to public schools. A new analysis by the Wisconsin Budget Project shows how lawmakers have siphoned billions of dollars away from school districts and redirected those resources towards tax cuts instead.

The results of the most recent Marquette University poll clearly show that Wisconsin residents believe that excellent public school are critical to supporting Wisconsin’s economy, and that lawmakers need to provide enough resources for public schools to educate the next generation of Wisconsin workers. When asked whether increasing spending on public schools or reducing property taxes is more important, nearly 6 out of 10 Wisconsin residents favored increasing school spending, and just 35 percent said reducing property taxes.

Residents all across the state place a high value on public schools, not just in particularly urban or liberal areas. In the city of Milwaukee, 70 percent said they favored increasing spending on public schools compared to reducing property taxes, but even in the rest of the Milwaukee area media market, an area known for its strong conservative tilt, a majority favored increasing resources for public schools rather than cutting taxes. The poll found that support for increasing school spending is also strong in the Green Bay/Appleton area, Madison, and the rest of the state. 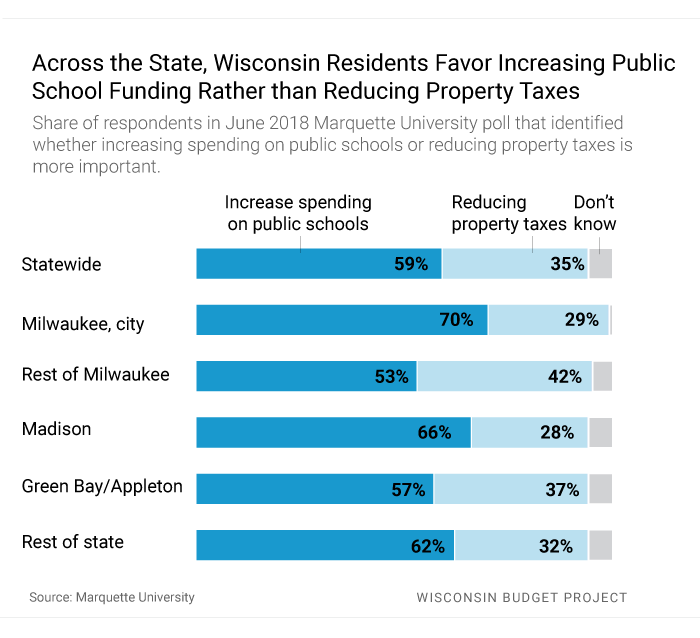 Wisconsin voters have clearly indicated they value increasing funding for public schools above continuing to cut taxes, but many Wisconsin lawmakers don’t seem to share that same set of priorities. State legislators have added dozens of new tax cuts since 2011, even as they have failed to fully restore budget cuts to public schools. The new tax cuts added up to a staggering $8.7 billion between 2012 and 2019. Meanwhile, state aid to school districts is still below 2011 amounts when inflation is taken into account.

Many of the tax cuts are channeled towards a small, wealthy, and politically powerful faction. This stands in contrast to the function of public schools, which benefit a diverse group of children from all income levels and who have no direct voice in the political process. Examples of new tax cuts narrowly focused on the rich include:

New tax cuts like these have drained money from public schools. If lawmakers had declined to pass new tax cuts and instead appropriated that money in the same proportion as other state tax money is spent, the result would have been an additional $649 million available for public school districts in 2019 – money that could have been spent to ensure that students have access to up-to-date technology and equipment, to repair dilapidated school buildings, and to draw teachers to work in remote areas of the state.

To ensure that Wisconsin is competitive in the future, Wisconsin schools must have the resources to offer students a high-quality education. Wisconsin voters recognize that, but right now many lawmakers are not aligned with their constituents’ priorities and are focusing instead on passing tax cuts for the rich.