Railroad Tracks a Danger to Bikers

126 bicyclists have been involved in crashes, 80 in Milwaukee.

By Elisa Sibinski, Bike Federation of Wisconsin - Mar 19th, 2018 04:04 pm
Get a daily rundown of the top stories on Urban Milwaukee 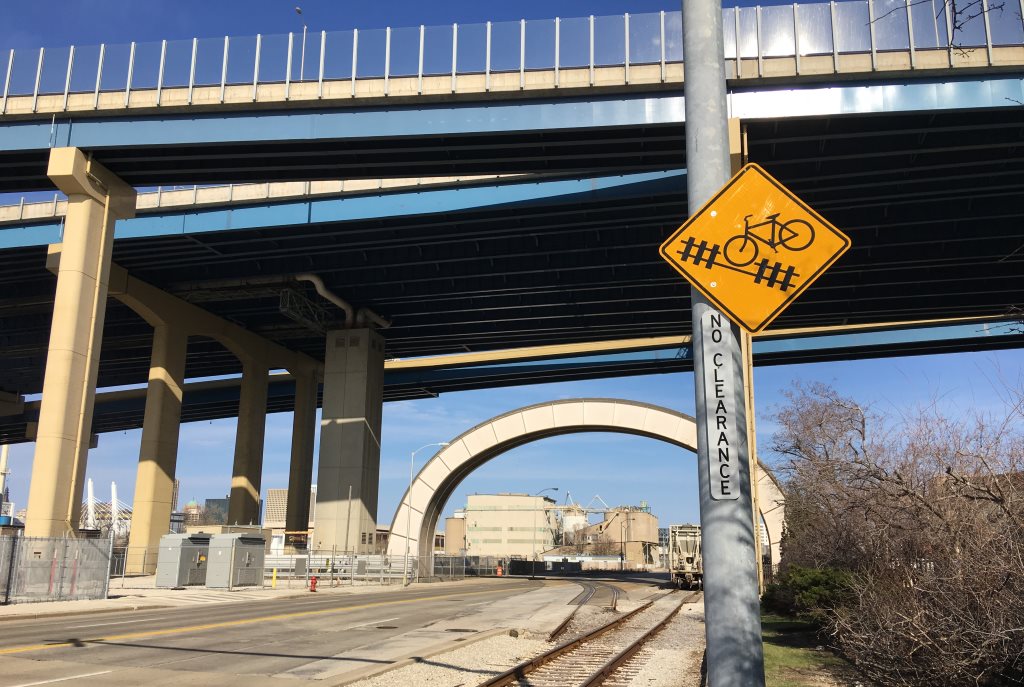 Do railroad crossings pose a risk to cyclists? This was the question I focused on for my final capstone project as I completed my Masters in Public Health at  UW-Milwaukee this past spring. Some months earlier, I had fallen victim to the tracks located at 900 W. Canal St. in the Menomonee Valley area of Milwaukee last summer. The crash landed me in the emergency room with retrograde amnesia – (yes, I was wearing a helmet!). This got me wondering how many others this might have happened to.

I came to the conclusion that I had to obtain the data myself. So, I developed a survey to identify how many cyclists have been involved at a bicycle crash at a railroad crossing in Wisconsin, with particular interest in Milwaukee County and the Canal Street railroad tracks. The survey was posted to social media by myself to the MKEBKE bike group and by the Bike Fed from March 24th to April 9th, 2017 and you can still fill it out here. 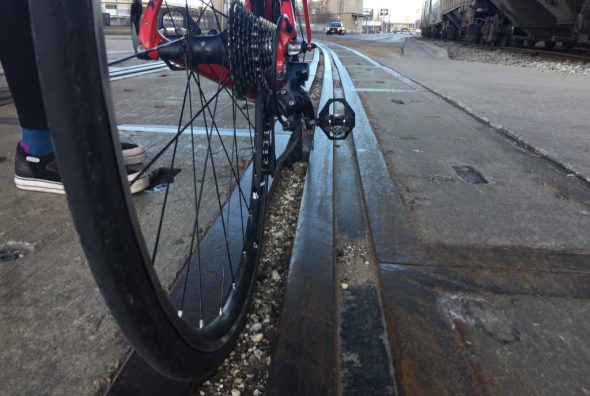 Crossing angle and flangeway depth can bring a rider down.

In all, 126 cyclists reported having been involved in a bicycle crash at a railroad crossing in Wisconsin, of which 80 occurred in Milwaukee County and 49 at 900 W. Canal St. In fact, I had three individuals contact me directly about their personal experiences. Two of these resulted in severe injuries and riders were hospitalized. One had a facial fracture from flying over the handlebars. The other suffered a broken collarbone. All three occurred at 900 W. Canal St. Recently, the City of Milwaukee has been in contact with the railroad about removing these tracks.

I originally planned to analyze data from open records and crash reports from the Milwaukee Police Department. However, the police department does not reliably track data for crashes that only involve one bicycle. An officer from the department stated that crash reports can only be filed if it involves a motor vehicle, pedestrian or another bicyclist. If it involves a bicycle and a railroad track, this should be called in immediately and an officer will respond and most likely the paramedics or fire department. The crash could possibly be filed as a “sick and injured” report as opposed to a crash report. Sick and Injured is not a report that is made after the fact. If an individual wishes to file a report for a past incident, they could go to the police department with documentation from the hospital and the police department would consider the type of report to classify it under. This is a problem as there is no consistent, trackable data. If bicycle crashes at railroad crossings go unreported, there is no way to bring awareness of the issue!

The problem with the Canal Street crossing is the near parallel angle of the track with the street. This inhibits cyclist’s ability to easily cross at a safe angle. Bicycle tires are narrow enough to fall into the flange way  (the gap between the rail and surface of the road). This causes the cyclist to lose control of the bicycle, resulting in a crash and a potentially serious injury. The American Association of State Highway and Transportation Officials (AASHTO) suggest a preferable angle between 60 and 90 degrees to minimize the likelihood of falls. This area is also regularly utilized by cyclists due to its adjacent location to the Hank Aaron State Trail. The trail was built on a former railroad bed of the Chicago, Milwaukee, St. Paul and Pacific Railway and has been in use since November 8th, 2010. It extends 14 miles long from the shore of Lake Michigan in Lakeshore State Park to Waukesha County, serving as a transportation connection between downtown Milwaukee and the suburbs to the west for those who commute between home and work. While most of the tracks parallel with the trail have been long removed or filled in, one small remnant of tracks remains at 900 W. Canal Street and is fully exposed.

There are a number of conditions which can force cyclists into the street where they are prone to cross the tracks at a compromised angle. To the immediate west of the railroad siding, the trail narrows significantly to approximately 3 feet 6 inches because of existing fence lines along a property, in addition to light poles and a fire hydrant. AASHTO recommends that the minimum width for a bikeway be at least six feet. There are also multiple curb cuts in this area, which allow cyclists to leave the trail and enter the road, which can appear to be the safer option when a pedestrian or cyclist is passing in the opposite direction at this pinch point. Less than a mile to the east, cyclists are required to cross the street at the crosswalk to remain on the trail, which can lead cyclists to leave the trail earlier in hopes of an easier transition to 6th Street. When the cyclists enter the street, it can be difficult to notice the danger that the railroad tracks pose. Even if cyclists are aware of the danger, with two lanes of regular traffic in both directions, it can be difficult to position the bike to cross at an appropriate perpendicular angle.

The tracks that cross Canal street serve a railroad siding and adjacent property owned by St. Mary’s Cement, which is based out of Toronto, Ontario, Canada,. However, these tracks are no longer in use and haven’t been for nearly 10 years – clearly evidenced through google street view, which shows them continuously paved over by the Hank Aaron State Trail since 2007. They do not serve any active purpose for the company or the city of Milwaukee. There is no reason for these tracks to exist and I propose that they be removed or at the very least filled in. To ensure the safety for cyclists, AASHTO suggests that the width of flangeway openings be kept to a minimum. Filler products, such as rubber, can be used on low-speed rail lines. Rubber fillers work by depressing under the rail wheels, and raising after the rail has passed. The filling in or removal of this siding would improve safety for cyclists, both on the Hank Aaron State Trail or along Canal Street. 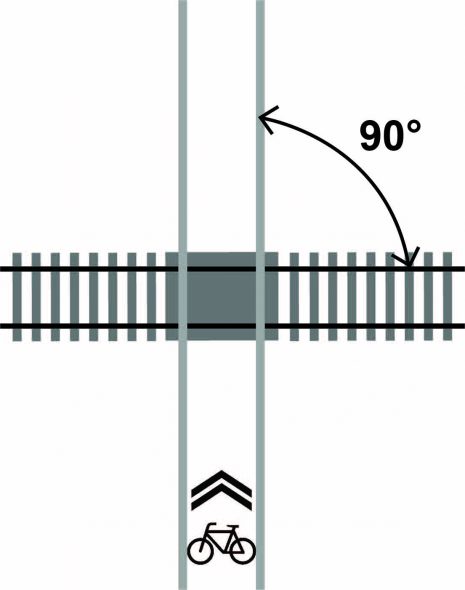 Cross tracks as perpendicularly as possible, 90 degrees is the best.

Additionally, South Water Street was the next most problematic area. Some 18 cyclists reported crashing along tracks in this area. These tracks are also nearly parallel with the street. Many cyclists end up riding in this area to avoid the heavy traffic of 1st Street and ride on the Kinnickinnic River Trail. However, the trail ends and transitions into the street with numerous abandoned rail lines. There is signage warning of the danger of crossing railroads; however, these can be difficult to see as well as understand. Even an avid cyclist who is aware of the danger of crossing railroad tracks can be put in a compromising position trying to cross tracks with vehicular traffic sharing the same space.

This issue is even more relevant as the rails for the new streetcar are being constructed around Downtown and cyclists will have an abundance of tracks to cross. Crossing at a perpendicular angle should not pose much risk. However, when cyclists are riding on the street parallel to the tracks it will be very difficult to make a left turn and cross the tracks at an appropriate angle, especially in the midst of traffic. We need to be proactive and find a way to keep cyclists safe. Where have you come across bad crossings? What about good crossings?

-Report crashes and safety issues to local municipality and the online survey.

-Understand the Rough Crossing process and share it with municipality if railroad is not responsive.

-Cross tracks as perpendicularly as possible, 90 degrees is the best.

16 thoughts on “Biking: Railroad Tracks a Danger to Bikers”