Swingin’ Door Is a Winner 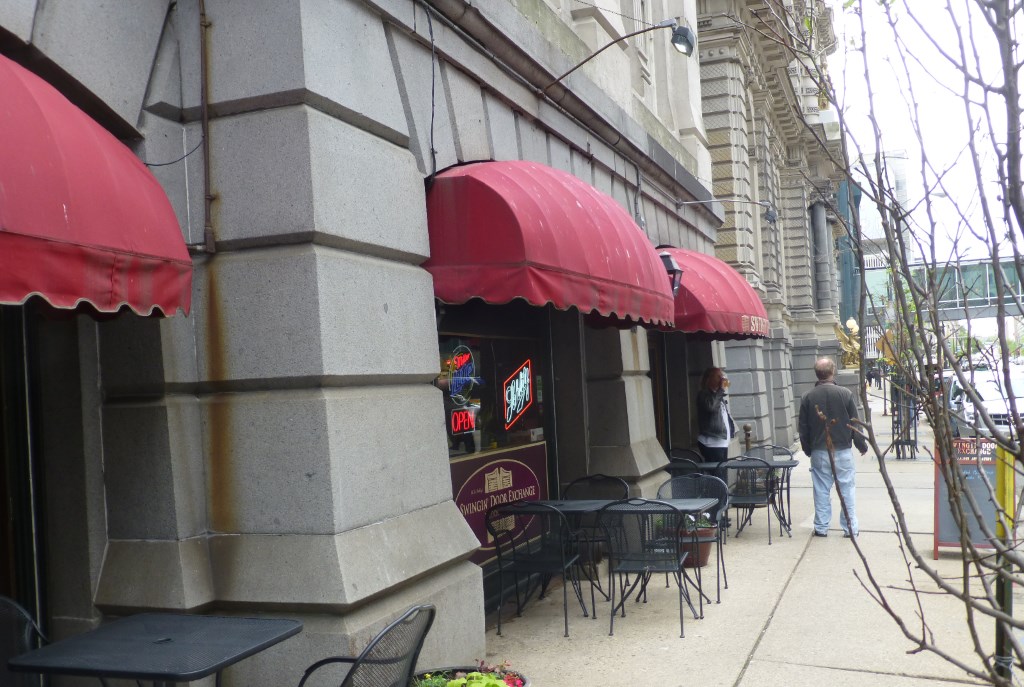 The Swingin’ Door, tucked into the elegant Mackie Building, has been a tavern since the 1930s, and a restaurant since the early 70s. I remember having a dinner there sometime around 2000 and thinking the food was so so, not good enough to bring me back.

Things are different now. The restaurant looks the same with pine paneled walls, a long wooden bar with a TV for sports fans, and gorgeous leaded glass windows, but since my meal in 2000, there’s been a significant uptick in the quality of the food. 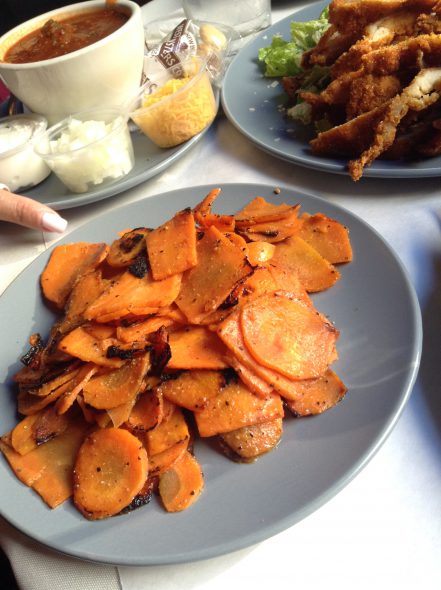 What brought me to the Swingin’ Door this time was a rumor that the carrots were worth a trip to Michigan Street, so I rounded up two friends on a Saturday for a late lunch. We found the restaurant packed, a surprise since it was a Saturday, not a weekday, and the rest of the area around the Swingin’ Door looked like a ghost town. It’s a small place, two rooms, a dining room with a dozen tables, and the small bar where every seat was occupied.

We noticed many of the plates servers carried to adjacent tables held brunch entrees. We saw some beautiful French toast, corned beef hash topped with two once-over-easy eggs, and a giant omelet, which, according to the menu, was stuffed with ham, onions, mushrooms, pepper, cheese, potatoes, and tomatoes.

Because I was there for the carrots, I ordered two Crunchy Chicken Sliders from Exchange Plates, and added a side of Spicy Vermouth Carrots. Each slider had a generous piece of chicken done to perfection. The chef coated the meat with crushed cornflakes and somehow managed to keep the chicken both crunchy and juicy. A smear of Cajun ranch sauce rounded out this mini-sandwich. As for those anticipated carrots, they exceeded expectations. They were spicy, crunchy, a little peppery, an everyday vegetable transformed from unexceptional to fantastical.

A companion added the chicken to a Caesar Salad. Not only was the salad above average with its garlic Caesar dressing, but the additional slices of crunchy chicken were enough to feed three people. Like the chicken in the sliders, it was crisp and juicy.

Another companion chose the Grilled Russian, a meaty cheesy pile of shaved roast beef, corned beef, mozzarella, and cheddar, topped with coleslaw, packed inside grilled marble rye. All that protein in one sandwich sounded like an exercise in excess, but it wasn’t. There was enough of everything, but not too much, to keep it from being a gloppy mess, and both meats were tender and full of beefy flavor.

From two desserts on the chalkboard, Chocolate Mousse and Snickers Cheesecake, I went with my favorite candy bar. All the parts were present, peanuts, chocolate, and caramel, on top of a chocolate cookie crust. It tasted as rich as it sounded, a decadent treat to share.

I returned on Taco Tuesday to sample the beets which I had noticed on my prior visit. Beets and tacos didn’t sound like a match so I ordered the Spicy Pulled Pork while my companion chose the Blackened Chicken Bacon Avocado Sandwich with melted cheddar.

The spicy pulled pork sprawled out of the toasted bun making a messy jumble of meat to savor. Its spicy heat, moderated by an accompanying cup of coleslaw, added a tang to the meat. The chicken sandwich, with its stacked potpourri of flavors, could have been over the top, but it had just enough of everything to give it a proper balance of textures and flavors.

The beets that brought me back to Swingin’ Door were awesome. Thick slices of large beets which had been marinated, spent enough time on the grill to give them dark grill marks and a hint of char flavor around the edges. A sprinkle of goat cheese added a salty pop to the piquant sweet-sour beets.

The carrots and the beets are reason enough to stop in for a sandwich, but if you are looking for a full meal to go with those veggies, you have several options: BBQ Back Baby Ribs; New York Strip Steak; Pork Loin Chop; Ahi Tuna Steak; and eight Jumbo Panko Fried Shrimp. All the dinners come with a roll, a vegetable, and your choice of a side including carrots and beets.

If you want ribs, but not a full dinner, you can order a half rack from the Exchange Plates and add Caramelized Brussels Sprouts with candied pecans and Sriracha aioli. I’m no vegetarian, but damn, I can’t rave enough about those veggies, or for that matter, everything we sampled on two visits to Swingin’ Door. 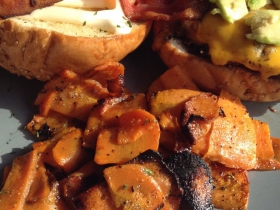 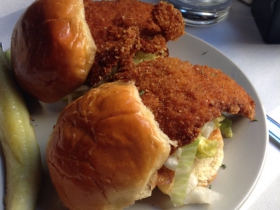 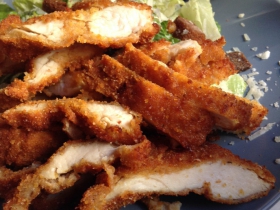 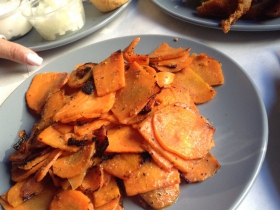 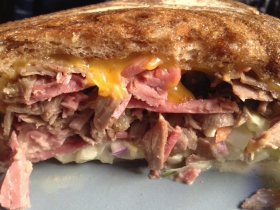 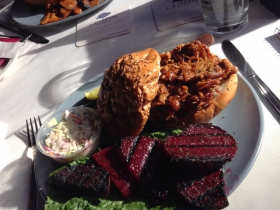 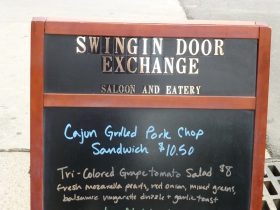 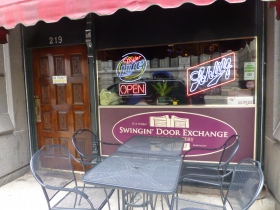 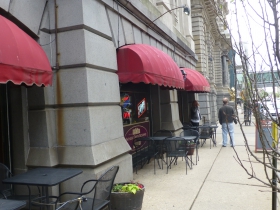 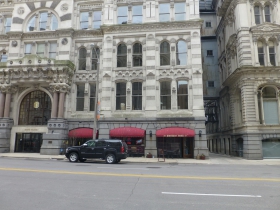 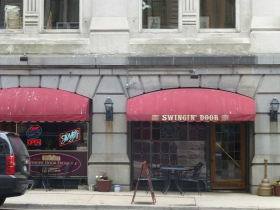 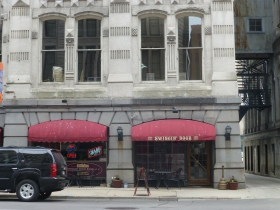 3 thoughts on “Dining: Swingin’ Door Is a Winner”