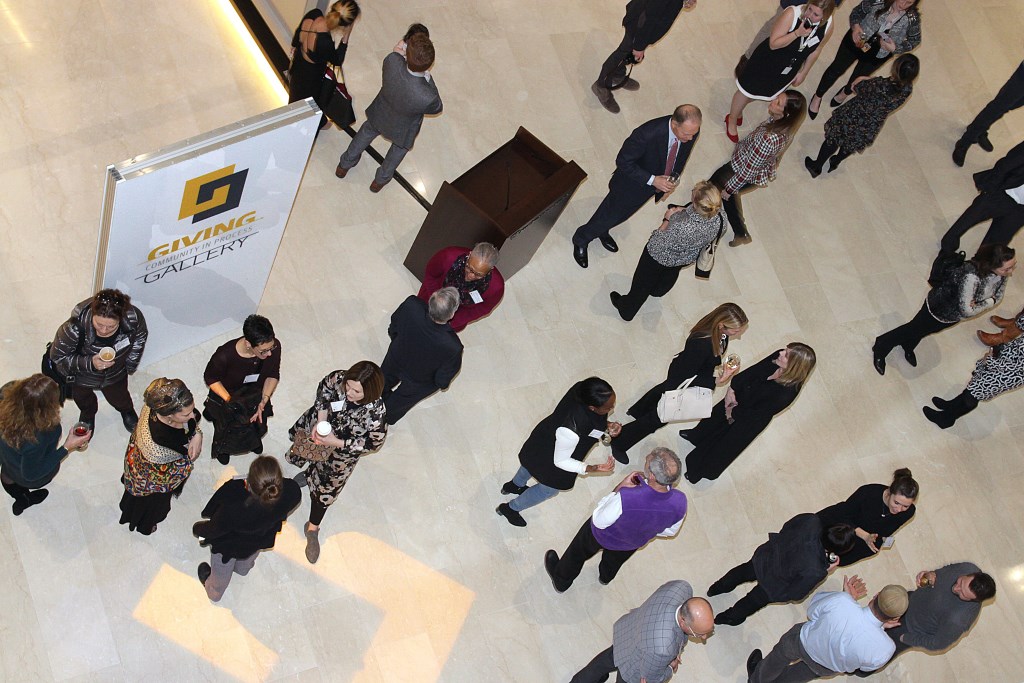 Yesterday, Northwestern Mutual held a VIP Opening Party for its art exhibition celebrating community organizations serving the Milwaukee area. Entitled “Giving Gallery: Community in Process,” the show commemorates the 25th anniversary of the Northwestern Mutual Foundation, and features art works commissioned from 17 Wisconsin artists in tribute to 25 nonprofit agencies and community institutions the foundation has supported over the past quarter century. On hand for the celebration were representatives of the company, like vice president Eric Christophersen, local non-profit leaders, like Danae Davis, Executive Director of Milwaukee Succeeds, and governmental officials like Mayor Tom Barrett.

The company’s Assistant Director of Strategic Philanthropy Lynn Heimbruch says “We’re hoping people walk away from this experience inspired to volunteer, donate, and advocate for these organizations or for causes that inspire them, because it takes all of us to make the community what it can be.”

According to Heimbruch, the foundation funded about 250 organizations as of last year, and from that group, they chose to feature 25 “best in class” organizations for the exhibit across five focus areas—community connections, childhood cancer, empowering education, neighborhood connections, and community destinations. The 25 featured organizations have received about $90 million of the total $320 million awarded by the Northwestern Mutual Foundation, and represent the overarching goals of the foundation in the community. Each featured organization was given a $10,000 grant in conjunction with the exhibition, and was then paired with a Wisconsin artist, who took inspiration from the organization to create a piece of art.

In addition to art works focused on the featured organizations, tintype artist Margaret Muza (artist in residence at the Pfister) was commissioned to create portraits of all of the participating artists, and painter Nova Czarnecki created a piece inspired by the foundation as a whole.

The exhibit opens on February 15th, 2018 and will remain open in the lobby of the Northwestern Mutual Tower and Commons for one year from 8 a.m. to 6 p.m. on business days, and will be free to the public. The gallery experience also includes a multimedia component—visitors will have access to iPads that will give them more information about how to become involved with any of the participating non-profits, or with the foundation itself.

The first area of the gallery is dedicated to community connections organizations. This category includes organizations whose impact transcends several of the other foundation’s focus areas, so these groups include the United Performing Arts Fund (which is the largest performing arts fund in the country, and finances many of Milwaukee’s arts groups), the United Way, the Red Cross, and Milwaukee Succeeds: Cradle to Career. In this section, I found Hiroko Yamada’s dragonfly sculpture inspired by the Red Cross particularly striking. According to her artist’s statement, “In Japanese culture, the dragonfly represents perseverance and support, carrying the spirit of our ancestors. As I created the piece, each stroke of the hammer echoed the ongoing commitment of the Red Cross to provide hope.”

The Northwestern Mutual Foundation supports several organizations working in the Amani, Metcalfe Park, and Muskego Way neighborhoods, and the second section of the gallery was dedicated to those neighborhood groups. The featured groups are COA, Feeding America, the Dominican Center, Metcalfe Park Community Bridges, Milwaukee Christian Center, and Sojourner Family Peace Center. My favorite pieces in this section included Tom Queoff’s bronze sculpture of budding leaves and family for COA, Della Wells’ joyous garden collage in tribute to Feeding America, and a painting in three parts by the husband-and-wife team of Jonathan and Amy Gelfman for Sojourner Family Peace Center. Featuring floating figures and bright colors reminiscent of Marc Chagall, the Gelfman painting is separated into three panels – one by Amy, another by Jonathan, and a panel in the middle by them both. This seemed a fitting way to represent the work that Sojourner does with families splintered by domestic violence.

The final section of the gallery was the childhood cancer space. Sculptor Jordan Waraksa created a round table with stools to celebrate the Ronald McDonald House, and photographer Mike Miller took pictures of families affected by cancer on behalf of Children’s Hospital of Wisconsin, Beads of Courage, and Alex’s Lemonade Stand.

Ronald McDonald House CEO and president Ann Petrie says that the Northwestern Mutual Foundation has supported their healthy food program since 2013, allowing them to provide fresh food and made-ahead meals to the families they serve. After Waraksa was paired with the house, Petrie gave him a tour showing him “how important this idea of food and kitchen and togetherness is for the families that we serve.” Petrie says that the Ronald McDonald House serves 2,600 families each year, hosting families free of charge in their 70 rooms. “Families stay as long as they need to while their child is receiving treatment at the hospital. There’s a bridge that connects us to Children’s Hospital both literally and metaphorically.”

After touring the Ronald McDonald House, Waraksa came up with the idea of a round table, saying it symbolizes unity and wholeness. “There’s patchwork and butterfly joints that cover imperfections, but those imperfections end up being the most beautiful facets of the whole piece,” he says. “The base was about the relationship of the artist, of Northwestern Mutual, and the central nonprofits that are in the community  — a kind of triangular relationship where we all depend on each other to balance the community and to make it a good place to live.” Waraksa also used a special Japanese technique called shou sugi ban to char the wood for the stools, making them fireproof and bug resistant. This process also serves as a powerful metaphor for cancer treatment, which is meant to defeat the disease, but can be harrowing in itself.

According to Heimbruch, seeing the exhibit come together after 18 months of planning is emotional. “It’s amazing… The work we do is tough. We’re making a lot of decisions in the community around which types of organization we can support, and no matter how much money we had, it wouldn’t be enough to solve all the problems that the community is faced with. Our focus and dedication toward the causes that we’ve selected makes me proud to be a part of the team that put this together.”

Our photos capture the opening night and attendees, and some of the works in the show. 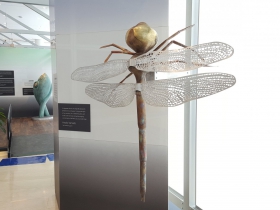 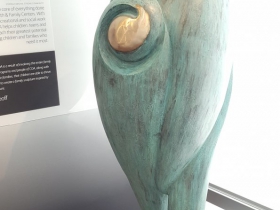 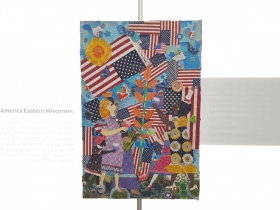 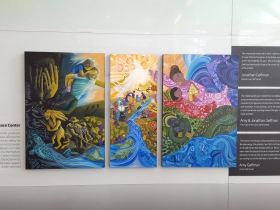 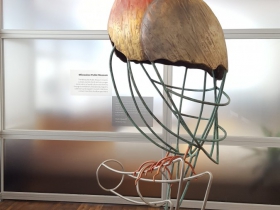 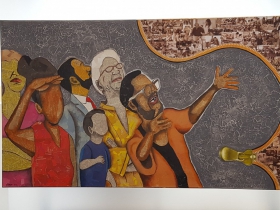