By Tamarine Cornelius, Wisconsin Budget Project - Nov 14th, 2017 11:58 am
Get a daily rundown of the top stories on Urban Milwaukee

Nearly 300,000 Wisconsin taxpayers would pay more in federal income taxes under a plan released on November 9 by Republican leaders in the U.S. Senate. That means about nine percent of all taxpayers in the state, or 1 out of 11 taxpayers – would pay more under the Senate plan. And if you consider who will wind up paying for the deficit-financed tax cuts in the long run, the number of low- and middle-income Wisconsin residents who would be worse off under the bill is likely to swell.

About 89,000 of the Wisconsin taxpayers with tax hikes are in the bottom 60% of the income spectrum, with incomes of less than $95,000. The average annual tax increase for those taxpayers would be $680. Figures are for 2027, when the permanent effects of the tax changes are in force.

The Senate plan follows on the heels of a separate but similar tax plan proposed by GOP leaders in the U.S. House of Representatives. Both plans would raise taxes for hundreds of thousands of taxpayers in Wisconsin, including those with low incomes, and give outsize benefits to the very wealthiest, with the House plan skewing even more in favor of the wealthy than the Senate plan. (To read how the House plan would affect Wisconsin taxpayers, read What the Details of the Trump-House GOP Tax Plan Mean for Wisconsin Taxpayers, in Five Charts, November 9, 2017.) 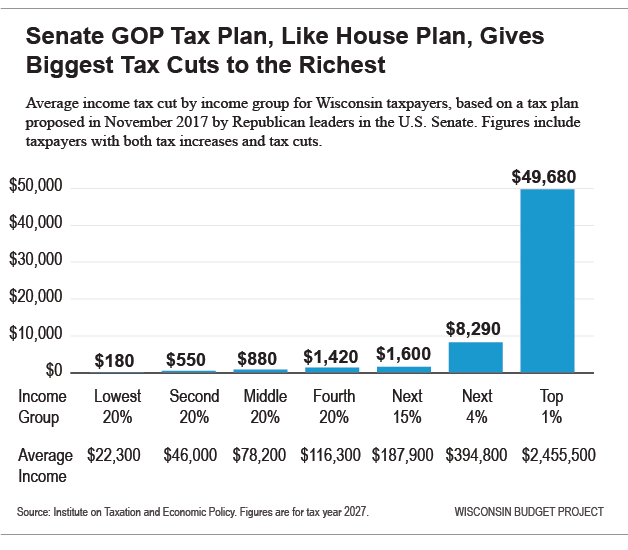 Wisconsin taxpayers with low- and middle-incomes are likely to be worse off under this tax bill– not just compared to the richest taxpayers, but compared to their current standard of living – if you consider how the cost of the plan will be offset. This article in Medium explains why:

“[T]his tax bill isn’t fully paid for. It increases deficits over the next decade by $1.5 trillion. And while there are many low- and middle-income Americans paying higher taxes under the legislation, all income classes get a tax cut on average under the Senate plan — for now. And, it is just for now. Eventually, these tax cuts will be paid for, and then the question will be who covers the bill.

The Republican leadership has suggested how they intend to pay for these tax cuts and reduce federal deficits — through cuts to programs and services that disproportionately benefit low- and middle-income Americans. As a result, it’s not just that low- and middle-income Americans’ living standards won’t go up as much as those at the top. It’s that their living standards are likely to suffer in the long-run as they are left holding the bag.”

The Institute on Taxation and Economic Policy has more information about how the Senate tax plan would affect taxpayers in Wisconsin and other states.

For a summary of both the Senate and House tax plans, read this Bloomberg comparison of the provisions included in the bills.

In the Senate, the tax bill heads to the Senate Finance Committee, while the House plans to vote on its bill this week. Republican leaders in Congress are pushing an aggressive timeline, setting their goal for passing tax legislation before the end of the year.