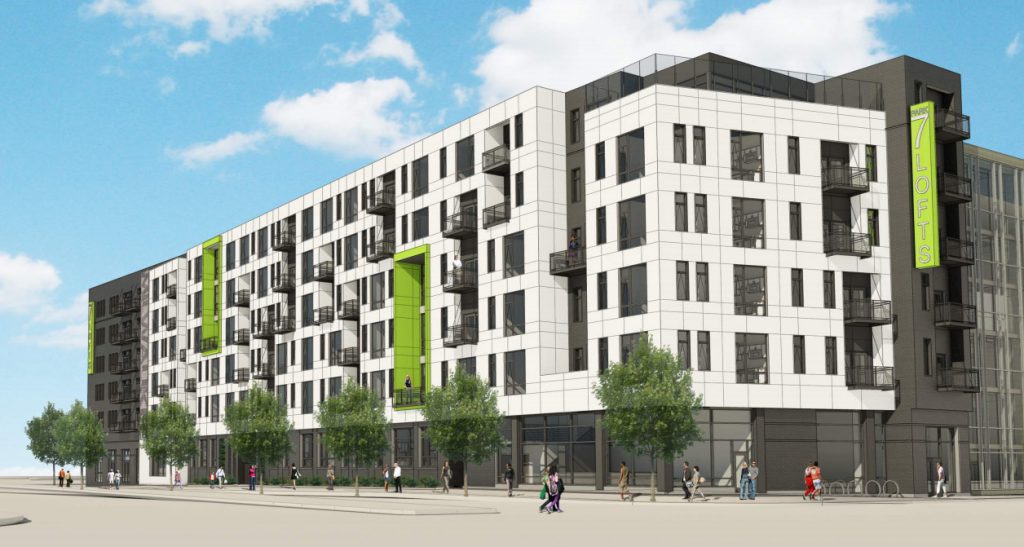 More apartments, less commercial space. That’s the gist of a series of design modifications to the apartment complex planned for the Milwaukee Bucks arena district, which has now grown from 107 to 112 apartments.

The project, which because of its location in the arena district requires design approval, was back before the City Plan Commission Monday afternoon. Royal Capital Group development manager Terrell Walter told the commission that “we learned that we are making a market here, specifically for commercial space. Speaking in concert with the Bucks, we all have high aspirations for this area and what it’s going to be, but today it’s a redevelopment area… What we’ve heard from the market is ‘hey, I don’t want to be the first one in.'”

The developers will keep commercial stalls on the north and south end of the building, and are in the process of finalizing agreements with tenants for those spaces. Who are they? Walter told the commission that they’re local firms; one is a “health and fitness club,” the other a “cafe/juice bar.”

The space along the street in the middle of the apartment building will now be filled with five apartments. Engberg Anderson Architects architectural designer Amanda Koch told the commission that the units will be elevated four feet off the ground, with transparent glass starting almost seven-and-a-half feet off the ground, a stark departure from how retail space would normally be designed. She noted “the average person is not going to be able to see in.”

When asked sarcastically by commissioner J. Allen Stokes if Koch was referring to him, Koch was quick to respond that “we are right next to the arena, so there are some basketball players nearby.” Still, with the glass starting only at a height well above seven feet, even if Giannis Antetokounmpo goes for a post-practice stroll he won’t be able to see the dirty laundry tenants have left sprawled across their floors.

Commissioner Whitney Gould asked a more practical question about noise, especially after events. Walter responded “we do think this is going to be a highly active zone, but we were thoughtful in our design.” The units will be lofted with 22-foot-high ceilings and all of the bedrooms are away from the street. Some bedrooms will be located on the second level. Living rooms and kitchens will be the only rooms along the street.

A small number of design tweaks were also necessitated by the relocation of utility infrastructure, according to Koch.

The project will be built along N. 6th St. between W. Juneau Ave. and W. McKinley Ave., immediately west of the new parking structure being constructed in tandem with the new arena. The mixed-use apartment building is being designed by Engberg Anderson Architects.

Urban Milwaukee reported in October that the general contractor CD Smith had secured a permit to close a portion of N. 6th St. during construction.

Due to the unique nature of the site, the building will be a three-sided, triangular-shaped structure. It will not have any windows on its eastern facade, as it will border a parking garage. The units in the building will be a mix of studio, one- and two-bedroom apartments. The potential for affordable apartments in the building was announced by Royal Capital in a May 2017 zoning hearing on the project, but the firm has yet to announce final details of that proposal.

A residential entrance would be built along W. Juneau Ave. on the south end of the building. Three street-level commercial spaces are planned along N. 6th St., with targeted uses including a lounge and fitness center.

The Bucks announced Royal Capital Group as the developer of the site in February. As part of the deal, the team’s real estate affiliate will be an equity investor in the privately-financed project.

The Common Council approved the project’s design in June 2017.

Because it is being developed on former county-owned land in the Park East corridor, the project will need to pay union-level wages to those working on its construction. The developers, at the project’s announcement in February, also announced that they’re voluntarily complying with the city’s Residential Preference Program and Small Business Enterprise programs. As such, Royal Capital will need to have 40 percent of the project’s work hours completed by those certified as under- or unemployed by the city as well as having 25 percent of the project’s contracting led by minority-owned small businesses.