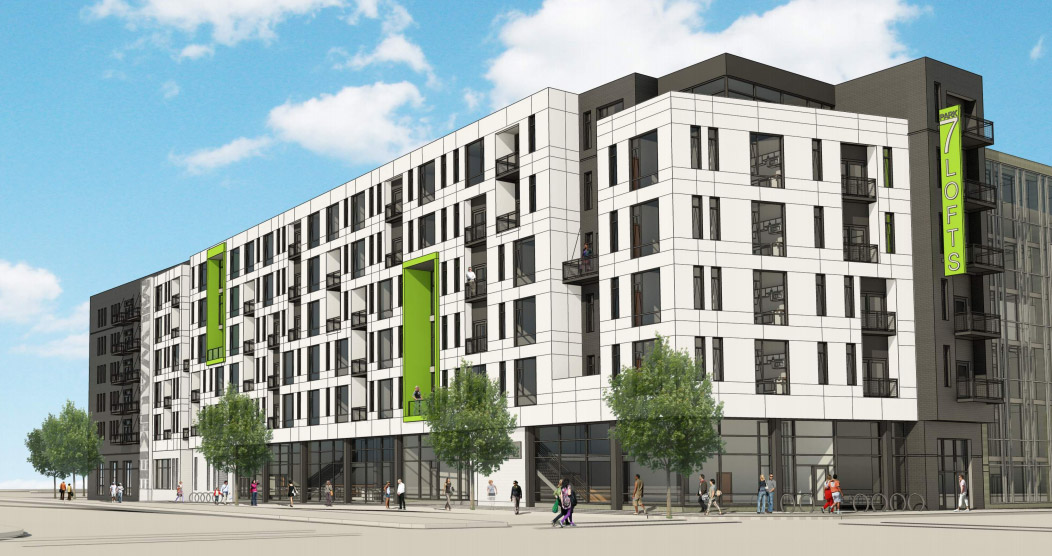 A proposed apartment building for the arena district received a cautious thumbs up from the City Plan Commission. Under consideration was the design of the six-story, 107-unit Park 7 Lofts that would be built between W. Juneau Ave. and W. McKinley Ave. on the east side of N. 6th St. But instead of discussing the design, the public hearing on the project focused in on the affordability of the units.

Lennie Mosley, a resident of nearby Halyard Park, got the discussion started when she asked the developer Royal Capital Group if any of the units are planned for low-income residents. Royal Capital Group president Kevin Newell responded that “at this stage of the process we’re still evaluating all of our financing options. We can’t make a commitment either way.”

Commissioner J. Allen Stokes followed-up on the citizen comment by specifically asking if the developer is considering using low-income housing tax credits. Royal Capital’s Terrell Walter responded “there are no tax credits associated with this development, but that’s not the only way you can offer affordable housing.”

Walter went on to note that the firm has historically done projects which include an affordable housing component. According to testimony at the hearing, the firm has developed projects from Kenosha to Madison ranging from 81 to 254 units. At the February project announcement alderwoman Milele A. Coggs suggested the project would includes some units that were more affordable, saying “I am assured the rents will be so that many people who thought they couldn’t live Downtown will be able to.”

Stokes motioned to approve the deal, with commissioner Joaquin Altoro seconding the motion. But Altoro stated that the commission needs to begin having more discussions around affordable housing, particularly for downtown developments. The rest of the commissioners unanimously supported the proposal, which will next go before the Common Council’s Zoning, Neighborhoods & Development Committee.

Royal Capital Group secured the deal as part of a highly competitive bidding process the Bucks held for the site. Milwaukee Bucks president Peter Feigin was in attendance at the hearing, but did not speak. The Bucks’ real estate arm will have an equity investment in the project.

When the Bucks announced Royal Capital Group as their development partner in February the project was originally planned as only 90 units. The unit count has since grown to 107 units, but still includes only studio, one- and two-bedroom units. In a follow-up interview Newell noted that the unit increase comes from changing the unit mix.

Royal Capital has been pursuing a unique financing package for some time, but its representatives declined to discuss the financing after today’s vote.

A residential entrance would be built along W. Juneau Ave. on the south-end of the building. Three street-level commercial spaces are planned along N. 6th St., with targeted uses including a lounge and fitness center.

Due to the unique nature of the site, the building would be a three-sided, triangular-shaped structure. The building would not have any windows on its eastern facade, as it will immediately border a parking garage.

The building does not include any parking, but would take advantage of the parking garage. That garage, being built for the new arena, is to consist of 1,243 stalls. The garage has a budget of $43 million, with $35 million coming from the city via a tax-incremental financing (TIF) district and $8 million via a developer-financed TIF district. The Bucks and city will split revenue from the structure.

A 80-foot tall, vertical sign spelling out MILWAUKEE would be included on the building’s west facade, carrying forward a planned element of the parking garage that will be covered by the project. According to design documents, two 30-foot tall blade signs would read “Park 7 Lofts” at each end of the building.

In February, Newell said that tenant-only amenities would include a fitness center, club room, rooftop terrace and a series of lounges.

The project is being designed by Engberg Anderson.