A long-awaited component of the Milwaukee Bucks arena district development has been announced. The team’s development arm has selected Royal Capital Group, a black-owned firm, to build a 90-unit apartment building along N. 6th St.

The privately-financed building will be developed on a narrow lot on the west side of the arena’s new parking structure. Construction is expected to start this fall. The building will be erected on the east side of N. 6th St. between W. McKinley Ave. and W. Juneau Ave. immediately north of the new arena.

Royal, led by Kevin Newell, is planning to include a number of public amenities in the six-story building including a cafe, event space and sports lounge. Tenant-only amenities include a fitness center, club room, rooftop terrace and series of lounges. Units are planned to include a mix of micro, one-bedroom and two-bedroom layouts.

Royal will need to come before the city for final design approval on the project. Engberg Anderson is leading the building’s design.

Because it is being developed on former Park East highway land, the development will be subject to the Park East Redevelopment Compact. Complying with PERC requires paying union wages to those working on the project. Royal Capital will also voluntarily comply with the city’s Residential Preference Program and Small Business Enterprise programs. To comply with RPP and SBE requirements, Royal Capital will have 40 percent of the project’s work hours completed by those that are certified as under- or un-employed by the city as well having 25 percent of the project’s contracting led by minority-owned small businesses.

Royal is involved in a number of Milwaukee projects. The firm is developing a 181-unit apartment complex in the Brewers’ Hill neighborhood. They’re also a partner with Melissa Goins‘ Maures Development on the redevelopment of the Mill Road Library branch.

Newell told Urban Milwaukee that rents are still being finalized for the project, but that the project would include high-end finishes. That didn’t stop area alderwoman Milele A. Coggs from proclaiming at a press conference this morning that “I am assured the rents will be so that many people who thought they couldn’t live Downtown will be able to.”

At the press conference announcing the deal Milwaukee County Executive Chris Abele said the entire arena development represents an opportunity for the city and county to tackle its biggest problem, racial disparity. Abele praised the importance of the arena’s location connecting Downtown to the rest of the city and representing a greater economic development project for the region. Mayor Tom Barrett was equally bullish on the arena project stating “this is a really special time for Milwaukee and its happen because people believe in this city.”

As part of the deal, which attracted approximately 70 bidders according to Newell, the Bucks will make an equity investment in the project.

The seven-level, 1,243-stall parking garage is being developed with $35 million in city funds via a tax-incremental financing (TIF) district. The Bucks are leveraging an additional $8 million via a developer-financed TIF district to fund the garage. The team broke ground on the parking structure in June. The city will own the garage and evenly split parking revenue with the Bucks. J.H. Findorff & Son Inc. is leading the construction of the garage.

The design of the garage’s west wall was one of a handful of contentious elements during a design hearing held in 2015. At the time Bucks President Peter Feigin told the city’s Zoning, Neighborhoods & Development Committee that the team intended to move forward with the apartment building before the garage was finished because of the cost-effectiveness of building both at the same time. But without the apartment building included in the complex’s original design package, Alderman Nik Kovac said he couldn’t vote on design approval for a 60-foot wall with grass in front of it.

In an interview following the press conference Kovac stated that “if this has been part of the plan I would have voted yes.” 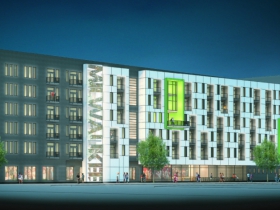 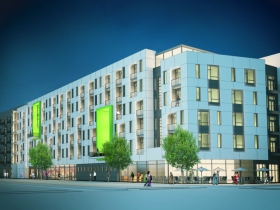 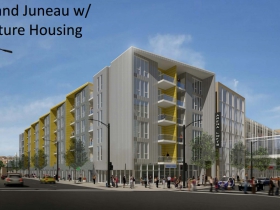 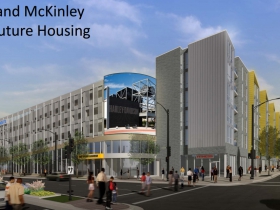 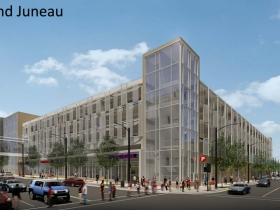 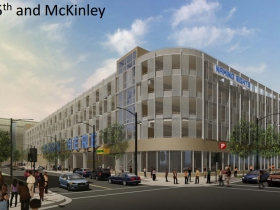 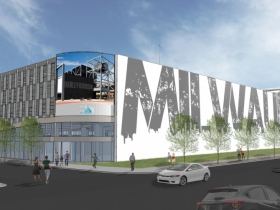 To the south of the apartment building is the team’s new arena, the Wisconsin Entertainment and Sports Center. The 17,500-seat facility is scheduled to open in October 2018. The Live Block entertainment center will be developed immediately east of the arena. Construction on that project has not started.

For more information on the other developments in the area and photos of their construction, see our most recent Friday Photos column covering the arena.