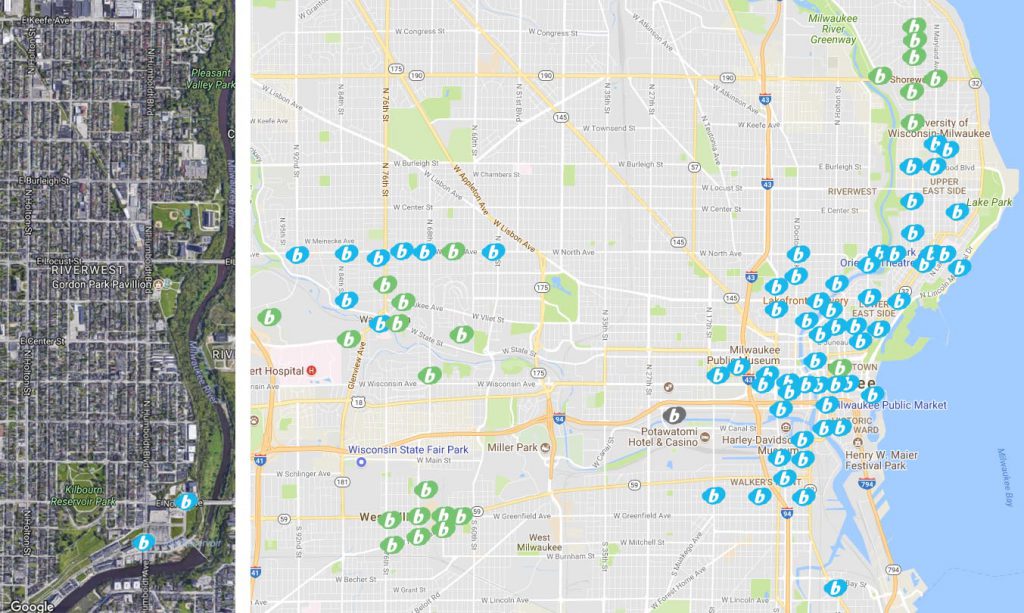 Riverwest is one of the city’s most bicycle friendly neighborhoods, but it lacks a Bublr Bikes bike sharing station. The non-profit system, which is built around station-to-station trips, has been building out a network from a combination of philanthropic support and public grants. The system’s entry into Riverwest will be the first funded by the crowd. A kickoff event will be held October 19th at Company Brewing.

The price tag to build and maintain a nine-bike station is $60,000 and includes the station, bikes, associated technology and year-round maintenance,  notes Bublr executive director Sally Sheperdson. Mario and Cathy Costantini, owners of Riverwest-based La Lune Furniture Company, have agreed to contribute in-kind to build the concrete pad the station will go on according to Sheperdson. An additional fundraising email states that Centro Cafe, Cafe Corazon, Fix Development, Fuel Cafe and Bliffert Lumber have pledged financial support for the new station. Colectivo Coffee will donate $1 per bag from sales of special Bublr-branded coffee to the campaign.

An online crowdfunding campaign is live, with $1,250 in donations. The campaign is seeking to raise $46,900.

The lack of a true Riverwest station hasn’t gone unnoticed. Via email from a bike sharing conference, Sheperdson notes: “We have received so many calls and emails asking about a station in Riverwest. Because this neighborhood has a strong sense of community and identity we wanted to work with the community to raise the funds to bring Bublr there.”

Two bike sharing stations are technically located in the neighborhood, but they’re both so far from the heart of the action that they’re nearly useless for Riverwest visitors and residents. For example, I rode a Bublr bike from the East Side to Riverwest this morning. After getting off my bike N. Commerce St. and E. North Ave. at the UWM RiverView Residence Hall, I still faced a .8 mile, 10+ minute walk to get to Riverwest Radio in the heart of the neighborhood on E. Center St. Ironically, I actually walked further than I biked on my trip.

The station connects the residence hall with the East Side, but is too far away to connect with the neighborhood. Similarly, a station at N. Humboldt Ave. and N. Commerce St. serves the Beerline neighborhood and a nearby Pick ‘n Save grocery store, but is actually closer to E. Brady St. than it is to E. Center St.

A new station in the heart of the neighborhood along E. Center St. or E. Locust St. will increase the utility of the existing stations and provide another way for residents and visitors to get to Riverwest.

Bublr Bikes currently operates a network of 62 stations. The system, with grant support, hopes to exceed 100 stations in the next year. The expansion will include the first stations in Shorewood and West Allis, as well as additional stations in Wauwatosa and Milwaukee. Sheperdson notes the system intends to add 26 stations in the city of Milwaukee in 2018.

Bublr, which originally opened in 2014 with 10 stations, operates on B-Cycle bikes and docks from Wisconsin-based Trek Bicycles. Individual rides are $3 for a half hour, but unlimited rides are available for $15/month or $100/year. A Bublr – Milwaukee County Transit System partnership named “Buslr” was unveiled in August.

Dubbed “Pedal Forward Riverwest,” a launch party will be held at Company Brewing on October 19th at 9 p.m. Beyond locally made beer, the event features a performance by the band Black & Mad and poetry by Kavon Cortez Jones. A $10 cover charge gets supporters into the event. Fifty percent of the event proceeds will go towards supporting the new station.