Three different legislative changes to oppose the project; all will have no impact.

Republicans in Wisconsin love to hate the Milwaukee Streetcar.

That isn’t exactly news, given that the project is made up of two things the state GOP routinely opposes — Milwaukee and anything involving mass transit. But despite the fact that rails are now literally in the ground, members of the Joint Committee on Finance couldn’t help but take another swing at the project this week when they finally passed a budget on a 12-4 party-line vote.

The 2017-2019 state budget is months behind schedule because of a stalemate between Republicans, including Governor Scott Walker, over how to fund transportation. A compromise proposal was finally passed on Tuesday  that includes a $75 annual fee for hybrid vehicles and a $100 annual fee for electric vehicles, $2.5 million to study toll roads, $402 million in new borrowing and delays on a number of projects, including work on the Zoo Interchange and Interstate 94 between the Zoo Interchange and Downtown. It also includes a couple swipes at the Milwaukee Streetcar, which despite being included in the budget, will actually have no fiscal impact.

The item dealing with the streetcar project doesn’t list a specific author, but similar budget amendments have been inserted by Republican Dale Kooyenga of Brookfield in 2013 and 2015. Kooyenga, whose district includes a portion of Milwaukee’s far west side, is a member of the Joint Finance Committee.

The section on the streetcar notes that “a City of Milwaukee TIF district may not incur direct or indirect expense related to the operation of a rail fixed guideway system.” Ominous sounding language, until you notice that its specifically about the operation of a system. The city has never approved using a tax-incremental financing district to fund the operation of the system. Instead the city has already approved using $59 million from three TIF districts to fund the capital costs related to constructing the $128 million system (federal grants will fund the rest).

How will the city fund the operation of the system? The plan approved by the Common Council in 2015 included the intent to fund the system through a combination of fare box revenue, advertising and the city’s parking fund. A federal grant has been secured to pay for the initial 18 months of operating costs, and the city hopes to secure one additional 18 month federal grant to support the operating costs of the system.

That plan apparently isn’t enough for the state. Republican legislators doubled down on a Milwaukee County ordinance restricting the county from paying for any costs related to the project by enshrining it into the budget. They also prevented the state from incurring any direct or indirect expenses related to the project, this includes “state urban mass transit operating assistance.” The operating assistance fund is heavily relied on by the Milwaukee County Transit System and other state bus systems to fund their operations, but the city has never publicly announced that they anticipated receiving funding from it.

So what does all this language accomplish? Nothing. 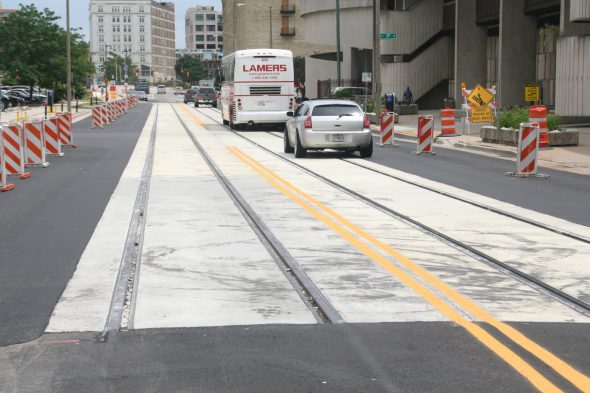 The Milwaukee County Board of Supervisors, who must fight over table scraps to fund MCTS annually, were never going to vote to give money to the city for the streetcar. Similarly, members of the state legislature weren’t going to vote to send money to operate the Milwaukee Streetcar. And multiple sources note that using TIF money for operations of anything is almost certainly already illegal under state law.

Republican legislators can head back to their districts to tell their constituents they put laws into place to stop Milwaukee from building that “boondoggle” for a “choo choo train.”  But the reality is the new legislation has almost no impact and construction on the project continues. Operations are still slated to begin in late 2018.

The Assembly and Senate both most still approve the deal, and Gov. Walker maintains a “frankenstein veto” that would allow him to strike certain words from the legislation. Unlike the last state budget, don’t expect Walker to aid the streetcar in any way, shape or form.

Likely in a move designed to avoid poking the bear, the administration of Mayor Tom Barrett has been incredibly quiet on the matter. They issued a brief statement noting “Despite the fact that the State is not funding The Milwaukee Streetcar, there are members of the legislature who don’t like the project. We’ve asked the City Attorney to review the motion that the Joint Committee on Finance passed last night and once we have that information we will be in a better position to plan and move forward.”

Perhaps desiring to control the news cycle, the Barrett administration also announced yesterday that they have selected an operator for the system. One would ordinarily expect a privatized government service to be met with applause by conservatives, but apparently not in the state legislature.

Alderman Robert Bauman, an ardent streetcar supporter, summed up the whole issue succinctly when he told Mary Spicuzza “It appears they’re trying to stop us from doing what we weren’t going to do anyway.”

29 thoughts on “Eyes on Milwaukee: Republicans Heap Hate On Streetcar”