Where’s the Change in Sherman Park?

Not much has improved since 2016 disturbances. The buck stops with Mayor Barrett. 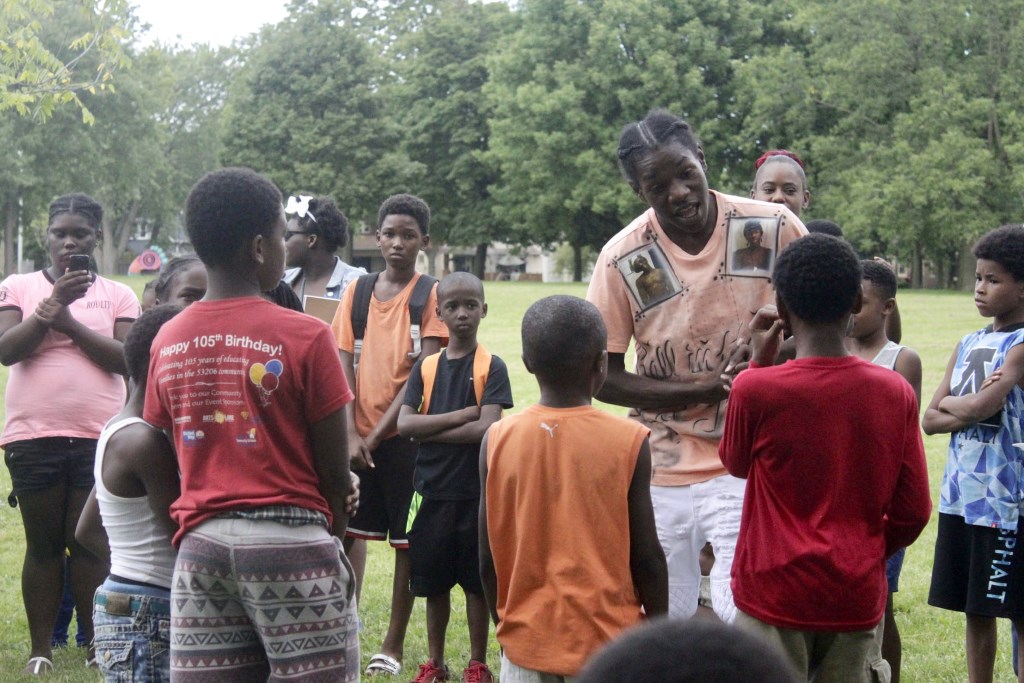 Community members gather in Sherman Park for a “Back to School Bash” in memory of Sylville Smith, on the first anniversary of his death. Photo by Keith Schubert.

That, in fact, is a loaded question and has many answers. Change has always been and will always be in constant motion. So yes, there have been many changes in Sherman Park and other African-American neighborhoods in the past year. But, the real question should be, “How significant have these changes been to eradicate the underlying issues that sparked the black community’s outrage that turned into expressions of anger and violence?” How do you measure change? How much change is required or, in some instances, is change even desired?

The impact of change should always be more important than the mere fact that change has occurred. That being said, in my opinion, no significant changes have taken place to address the root causes of inequality and disparity that are entrenched in Milwaukee’s economic or socio-political fabric. This is the reality that is hard to collectively see, let alone overcome.

As I see it, nothing has changed to alter the grip of systemic racism. (To get rid of a dandelion you have to eradicate it at the root. If not, it will continue to grow and sprout more dandelions.) The stress of disparity breeds contempt. Poverty is at an all-time high. Nothing has changed to make the community feel safer. Crime continues to plague some neighborhoods, which creates manufactured fears that turn racial stereotypes into self-fulfilling realties. Fake facts are turned into realities that maintain the status quo of a physically, mentally and spiritually unhealthy community. There is in fact a health crisis in the African-American community.

Jobs and economic independence and stability go hand in hand with training, education and opportunity. Changes have had no impact on our public schools’ curriculum, which should require a higher standard for logical thinking and problem solving from our students, who are rapidly becoming adult citizens and will be trapped in a negative spiral of disparity without these skills.

Let me be clear, some change has occurred based on sincere efforts to make Milwaukee and Sherman Park a better place and those efforts should be recognized and applauded. But change has to be a part of the core fabric of the Milwaukee community. This requires intellectual discourse and hospitable venues to meet and share observations, suggestions and ideas.

The construction of the freeway through the heart of the black community eliminated many institutions where we could plot, plan and carry out revolutionary protests against acts of disempowerment and disparity. The marches and demonstrations of the ‘60s are now merely historical images of Black Power and a reminder of our continued struggle for freedom and equality. Fifty years later why are we still in need of marches, demonstrations and black empowerment?

For the second year in a row Milwaukee has been designated “the worst city in America for African-Americans to live.” What does this tell us? If nothing, we are doomed. I am convinced that there are enough brilliant minds and expertise in this community to resolve any disparity problems Milwaukee may have. But I don’t see a sincere desire, will or collective vision in place to bring about substantive change. Slight changes are good but are only pieces of a much larger puzzle. We can’t solve the problems if we don’t have a whole picture that we can collectively see.

This is not meant to be a letter to the mayor or a critique of his priorities but, in my opinion, change starts at the top. The vision of the City of Milwaukee comes through tangible leadership and guidance from the mayor’s office. The mayor is a great guy and we have shared a long-standing personal and professional friendship but, if I were mayor I would want to know why my city is the worst city in America for African- Americans. Is this an embarrassment or something to be proud of? We cannot have it both ways and we cannot continue to ignore it. We need more than superficial changes as a response to spontaneous violence over long-standing legitimate grievances. We need a plan to be put in place with a mission to eradicate inequality and disparities.

With the current dysfunctional presidency and the deliberate dismantling and misdirection of our country back to the policies of the Jim Crow era it is of critical importance that Milwaukee take bold steps to make long overdue changes — substantial changes to propel us into a future that our past cannot overtake. The impact of change will always be more important than the mere fact that change has occurred.

Roy Evans, an attorney in private practice and an advocate on issues related to the rights and responsibilities of the African-American community, reflects on Sherman Park a year after the death of Sylville Smith at the hands of a Milwaukee police officer.

7 thoughts on “Op Ed: Where’s the Change in Sherman Park?”