By Tamarine Cornelius, Wisconsin Budget Project - Jun 28th, 2017 10:10 am
Get a daily rundown of the top stories on Urban Milwaukee 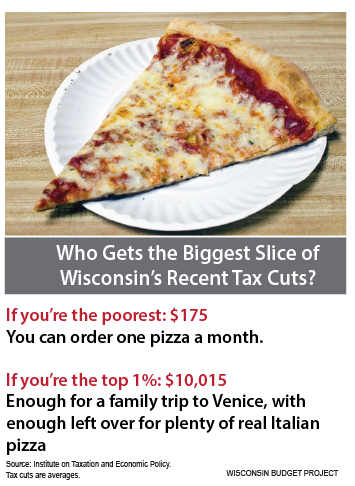 Who Gets the Biggest slice of Wisconsin’s Recent Tax Cuts?

A series of major tax cuts passed between 2011 and 2016 has been a boon to the wealthy, giving big tax breaks to Wisconsin residents with the highest incomes. A new analysis by the Wisconsin Budget Project takes a look at the outsized tax benefit lawmakers have provided to the top 1% by income in the state, and contrasts it to the much smaller tax breaks received by residents in the other 99%.

There are several ways of comparing the size of the average tax cuts received by residents in different income groups. But in this case, all of the methods point to the same conclusion: the tax cuts that lawmakers have passed in recent years have provided much larger tax breaks to the wealthiest than to other groups of taxpayers.  The analysis examines how the tax cuts stack up in three different ways:

Measured as a share of revenue loss to the state: Out of every dollar in new tax cuts, the top 1% of Wisconsin residents by income got $0.24. The bottom 20% by income got just $0.02, even though there were twenty times as many taxpayers in the bottom 20% compared to the top 1%.

That means that taxpayers in the top 1% receive an average tax cut 57 times as large as taxpayers in the bottom 20% by income. Put another way, the top 1% is saving more on taxes each week from recent tax cuts than the lowest income group will save over the course of the whole year. 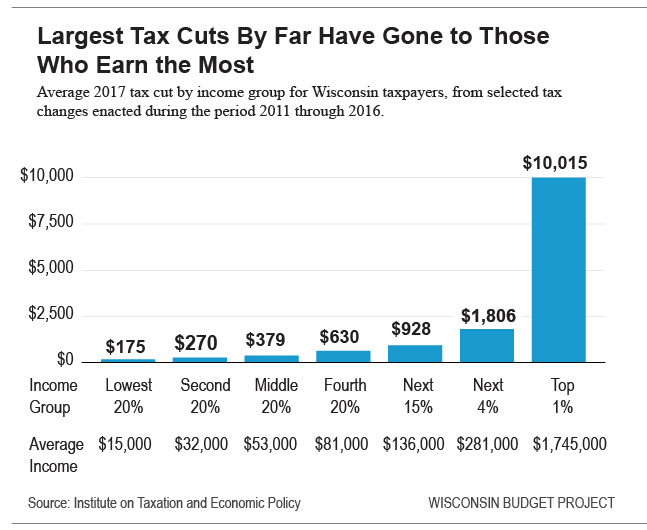 Measured as a share of the taxpayer’s income: The tax cuts the top 1% receive (0.70% of income) are more than twice as large on average as the tax cuts taxpayers with the lowest incomes receive (0.33% of income). This comparison takes into account the relative sizes of the incomes of the different groups.

The full analysis, which is based on information from the Institute on Taxation and Economic Policy, is available on the Wisconsin Budget Project website: Missing Out: Recent Tax Cuts Slanted in Favor of those with Highest Incomes.