The Northwestern Mutual Tower is an architectural triumph. 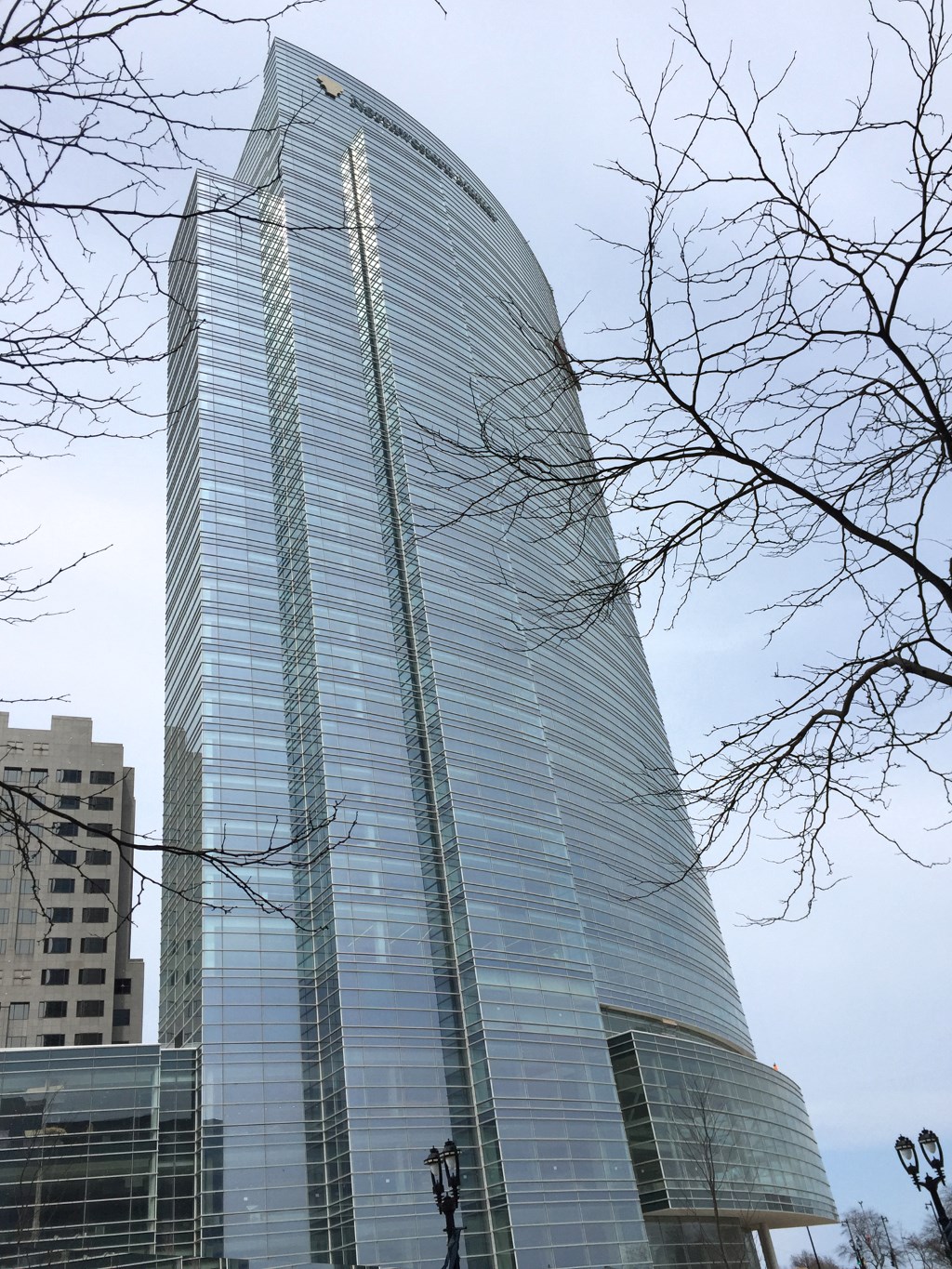 The Northwestern Mutual Tower sweeps around the bend at the end of Wisconsin Avenue. The arc of the building gathers momentum as it veers to the sidewalk of North Prospect Avenue. This has to be one of the most dynamic architectural encounters for the pedestrian in Milwaukee.

The left side of the front is anchored by perpendicular steps that harmonize the verticality of the building with its horizontal sweep. From a distance the southeast face of building flattens out. Depending on the light it can dissolve into a glassy cloud. It’s a very pretty, even delicate rectangle whose stature doesn’t just come from being taller than the other buildings on the skyline.

The west and north facades, the back of building, are densely layered stacks with a luxurious white granite spine. Looking up, the tower soars from the sidewalk but becomes almost ineffable from a distance. 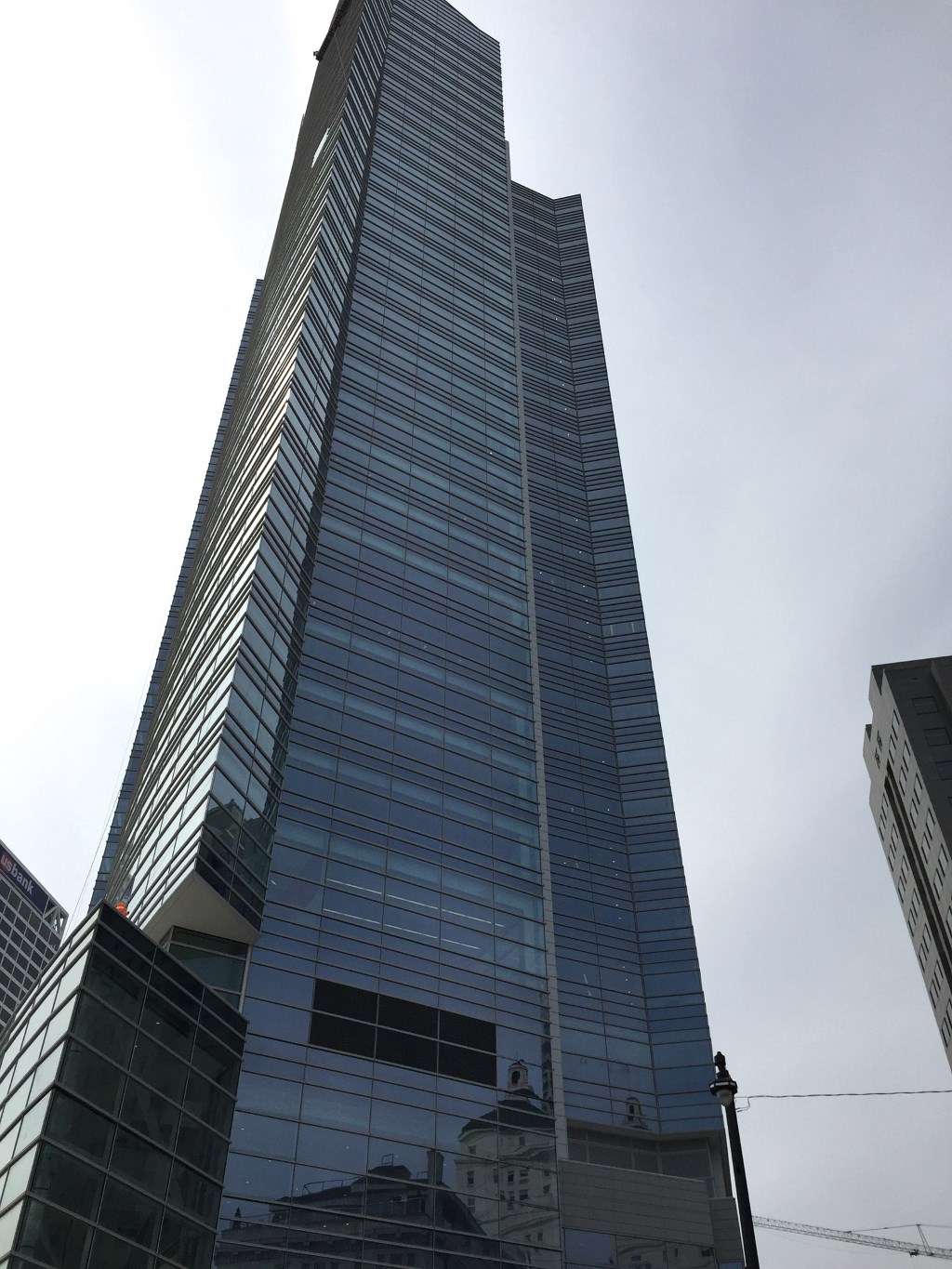 The building seems to have only two sides that taper to an improbable paper thin edge, a line that optically flattens the building. Which is odd because buildings need at least three sides to stand up. Tall buildings in particular used to have four symmetrical sides before the computer liberated architects to make waves.

Buildings today no longer need to have a definite shape. The NM tower keeps changing according to where you stand. It miraculously re-composes into a new complete thought every thirty feet or so along Wisconsin Avenue and Lincoln Memorial Drive.

The tower is so crisp, yet its form seems to blur. You can’t really wrap your mind around it, which turns out to be its singular virtue.

At first I thought the composition could be simplified. There are more than 20 different planes. More ornamental vertical rectangles than any building I can think of in Wisconsin. But it isn’t overwrought. The clarity of the architecture is not obscured by the complexity of the design.

It’s about time Milwaukee got its own glassy tower that reflects the light of the sky and the lake. As it stands today, the NM Tower is the second tallest and one of the largest buildings by square footage in Wisconsin.

It took more than 100 years and several buildings to make a suitable companion to the company’s classical revival building next door. What a splendid addition to the skyline. And striking in comparison to some other tall commercial buildings in Milwaukee. I am thinking of real estate ventures sold more like fabric by the square foot — the 100 East Building, the Milwaukee Center, The Moderne.

The NM Tower isn’t about maximizing money. The company is looking to make a statement, to represent their strength and values in a building. This kind of ambition produced all the best buildings in Milwaukee: the three local bank buildings (M&I, Marine, and First Wisconsin, as they were originally called), the gas and telephone company buildings, MGIC and so on. Our City Hall and downtown Public Library were not built just to hold meetings and books.

To reach these heights a building needs an ego, needs to be a contender. Like a cathedral or the way we used to think of government, a corporation has to be something to believe in.

But that doesn’t need to be advertised. I can only imagine what the architects thought about pasting the company logo atop the building. This art work is undoubtably a fine letterhead. The brown symbol to the left of the lettering is a flowery caricature of the top of the columns of the 1914 building next door, which the company used to attach its identity to. 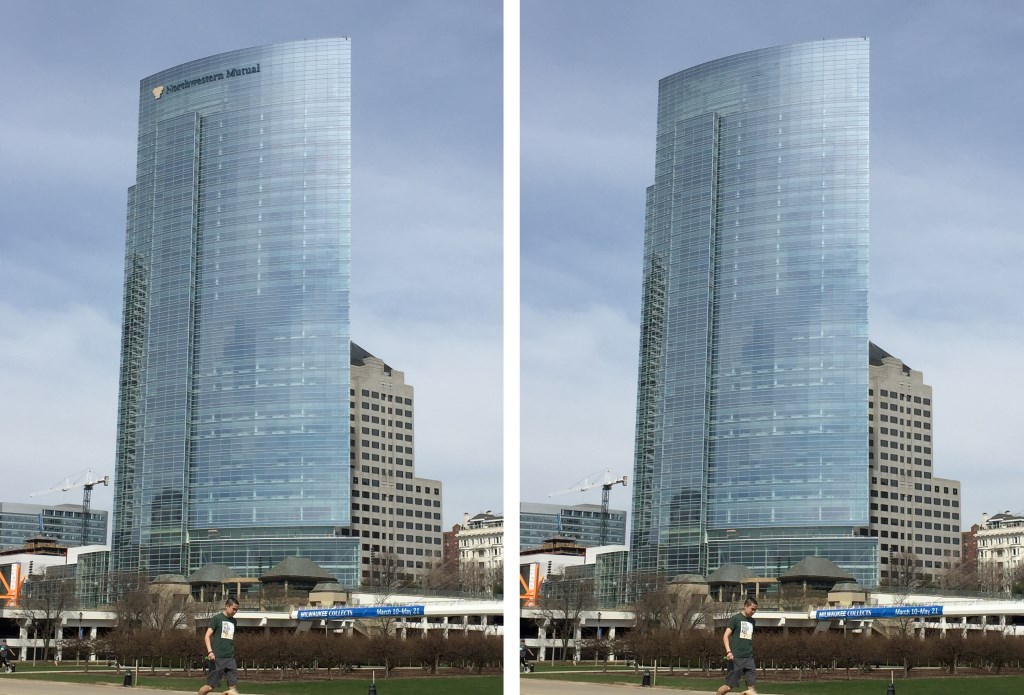 On the new building that image becomes a brown blob. It’s contrary to the sleekness of the design, to everything the building stands for. Northwestern Mutual unwittingly turned its brand into something one has to overlook to appreciate their new $450 million headquarters. Kind of like putting a milk dud on top of a creme brûlée.

But a small matter that can be changed in the future. Meanwhile, Northwestern Mutual’s headquarters has set a new standard for buildings that rise above the horizon in Milwaukee.

20 thoughts on “In Public: Our First Great Glassy Skyscraper”