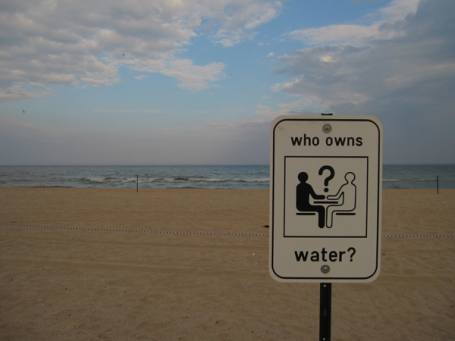 The waters of Wisconsin belong to the people of Wisconsin. Photo courtesy of Watershed project.

The waters of Wisconsin belong to the people of Wisconsin. This provision is enshrined in our state constitution as a Public Trust. Wisconsin’s Republican-controlled State Senate recently passed a bill, Senate Bill 76, privatizing Wisconsin waters for the benefit of high-capacity well owners.  SB76 gives high capacity well owners permanent rights to withdraw water regardless of the impact on other water users. In spite of court decisions that require the DNR to manage the waters of Wisconsin for the mutual benefit of all users in accordance with the state constitution, DNR Secretary Stepp chooses not to do so. Instead she relies on a non-binding opinion by Republican Attorney General Schimel rather than following the constitution, the courts, and the broad statutory authority granted her department by the state legislature.

I am baffled and hugely disappointed that current Republicans who control state government would so openly fail their oath to uphold the Constitution of the State of Wisconsin. Their failure now completely seals the deal to give high capacity well owners priority over all other users including shoreline property owners, anglers, boaters, tourist businesses, small farmers, and rural households, all of whom are entitled to reasonable use of Wisconsin’s water…..OUR water. These other users now face the certain prospect of lower lake levels, reduced stream flows, and dry or contaminated wells with passage of SB76.

A high capacity well permit is issued to wells that can withdraw more than 100,000 gallons per day. It is the only environmental individual permit that is issued in perpetuity. These permits are FOREVER! With passage of SB76 there can never be any reconsideration of whether the withdrawal meets constitutional requirements to assure reasonable use for all.

Passage of SB 76 means that once again citizens will have to go to court to affirm and regain their constitutional right to their reasonable use of the waters of the state. They have had to do this before. Every time the courts have upheld that right. Republicans ignore it. Instead, they give preference to high capacity well owners, over all others, to use public water for private profit.

The people should not have to sue their government in order to protect their water rights. They should expect their elected representatives to honor their oath to uphold the state constitution. Some potato and vegetable growers in the Central Sands region where water use is most contentious recognize that their use is unsustainable and hurting their neighbors. They are a minority, but they could be the start of a responsible discussion on water management policies that assures sustainable use for all. Any such discussion has to acknowledge that high capacity well permits must be for a fixed duration like every other environmental permit. Ten years is a reasonable standard.

As of this writing, the State Assembly had not taken up SB76. If they adopt the bill and it is signed by the governor, high capacity wells will be permanent without any opportunity for review. Citizen outrage last session stopped a similar bill. Citizen outrage may still be able to stop SB76 in spite of the bill’s strong support by Wisconsin Manufacturers and Commerce and the Dairy Business Association. Hopefully the people will prevail again.

State Sen. Mark Miller, D-Monona, is a member of the Wisconsin state Senate.

More about the SB 76