Changes Made to Couture’s Design

Rendering of The Couture

To avoid a future conflict with a neighboring developer, the development team for the lakefront residential tower known as The Couture went before the City Plan Commission again Monday.

Mark Irgens, the developer of the office building at 833 E. Michigan St., raised concerns over the design and also the notification he received for the March City Plan Commission meeting. These concerns drove the project before the commission for a second time in two months.

The Couture project, being developed by Barrett Lo Visionary Development, will see a 44-story tower with a three story base that has a parking structure and public park. The development is also part of two other public projects with a future streetcar terminal in its base and a pedestrian bridge leading to the Lakefront Gateway Plaza.

In March the commission requested that Irgens and the development team meet to resolve any issues. After four meetings in that time, Department of City Development Commissioner Rocky Marcoux said, the meetings were “constructive” and, “Did result in some changes.”

The changes submitted by the developers, and unanimously approved by the plan commission Monday, pertain to a triangular piece on the northwest end of of the planned development that connected the Couture development’s parking structure to the 833 E. Michigan building. 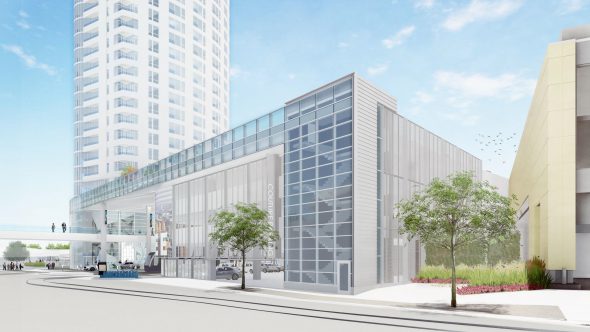 This rendering shows the newly created separation between The Couture and 833 East. Rendering by Rinka Chung Architecture.

The three story piece, shaped like a pizza slice, ranged from 55 ft down to 5 ft at its point. It is being removed from the structure and replaced with a facade similar to the street facing sides of the development.

Chad Griswold, the architect for the project from Rinka Chung Architecture, said this change, “Brings the mass of parking structure further away from 833, so that we create some separation between the two buildings.”

One floor of the section being removed was going to act as a snow chute for the building. On the second floor a pedestrian bridge between the two buildings is also removed.

Along with seeing minor changes for The Couture’s plan, the project was before the commission Monday to avoid any future snag over another complaint from the 833 East developers.

Marcoux said the developers of 833 called into question whether proper notification was given to them for the March City Plan Commission meeting.

The City Attorney found no error in notification, but, Marcoux said, the city didn’t want to risk the possibility of legal action in the future on the premise of improper notification.

The project goes before the Zoning, Neighborhoods & Development Committee Tuesday.

4 thoughts on “Changes Made to Couture’s Design”