The Environmental Mayor Holds Forth 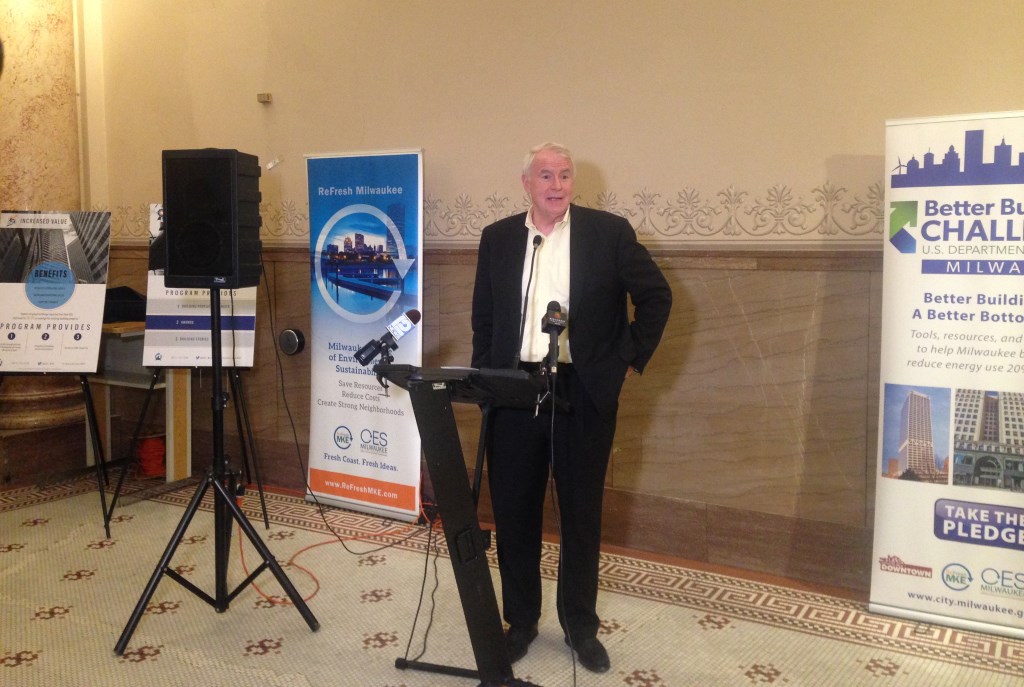 It was back in 2005 that Mayor Tom Barrett launched the Milwaukee Green Team to “build a greener, cleaner Milwaukee.” Barrett has pointed to cities like Toronto, Denver, Portland and Seattle, that embrace sustainability, are doing better than average economically, and are attracting millennials, a generation which places high value on sustainability.

Milwaukee is pushing to join that group, and consistently pushed for green measures, even as it has changed the name of the Office of Environmental Sustainability to the Environmental Collaboration Office (ECO), which thereby gave Barrett the chance to call himself the ECO Mayor.

No, that nickname hasn’t really caught on, but the city continues with its green efforts. City officials recently held a press conference to tout its ReFresh MKE sustainability plan, adapted and adopted to guide city actions and also encourage citizens and businesses to engage in solutions that are economically, environmentally and socially smart for the economy.

Barrett stressed that ReFresh MKE’s initiatives not only benefit the environment, but the economy as well. He highlighted ongoing efforts to make new and old buildings more energy efficient, incentives for owners to become more efficient, the forthcoming streetcar, Bublr Bikes, the transition of vacant lots into parks, increased solar panels, and the windmill in Bay View as examples of ReFresh MKE’s push for green solutions.

“There’s a lot of work that’s going on and it’s something we’re not going to slow down,” said Barrett.  “I know what the political winds are in Washington D.C, that they’re howling in a different direction. And my reaction is well, let’s capture that wind in wind farms!”

Members of the Barrett administration offered additional green pronouncements. Commissioner of the Department of Public Works Ghassan Korban highlighted areas where the city has seen improvements, like curbside and yard waste collections in an effort with the county of Waukesha. Also, improvements have been made in the city’s own vehicles.

“11 percent of fuel used by the DPW fleet is compressed natural gas, it’s an alternate fuel to diesel,” said Korban. “It’s much more cost effective, cleaner and quieter. Even the diesel fuel that we use is a biodiesel that also runs much cleaner for the 2,600 pieces of equipment that runs on it.”

Korban said the city will continue to expand its now 96 miles of bike lanes throughout the city and that track for Milwaukee’s street car should be delivered in March with work beginning in April.

ECO Sustainability Director Erick Shambarger said that his office has taken on more interns than ever before and that he has seen the quality of buildings increase even since 2014.

Shambarger also touted the work of HOME GR/OWN, a public private partnership run by the ECO, which converts north side vacant lots into healthy green spaces to drive economic development and job creation and increase quality of life. Since HOME GR/OWN started in 2014, the group has created 30 new parks, orchards, and community gardens that used to be vacant lots. The latest project, Fondy Park, located adjacent to the Fondy Farmer’s Market is set to break ground in May, as Urban Milwaukee has reported.

Shambarger urged attendees at the press conference to volunteer for local environmental organizations, and write letters to the editor or to utility companies to demand a clean solar choice.

“Continue to tell your neighbors about what’s going on in Milwaukee,” said Shambarger. “About why protecting the earth is important and why government action, community action and individual actions are all necessary for us to move forward.”

4 thoughts on “The Environmental Mayor Holds Forth”