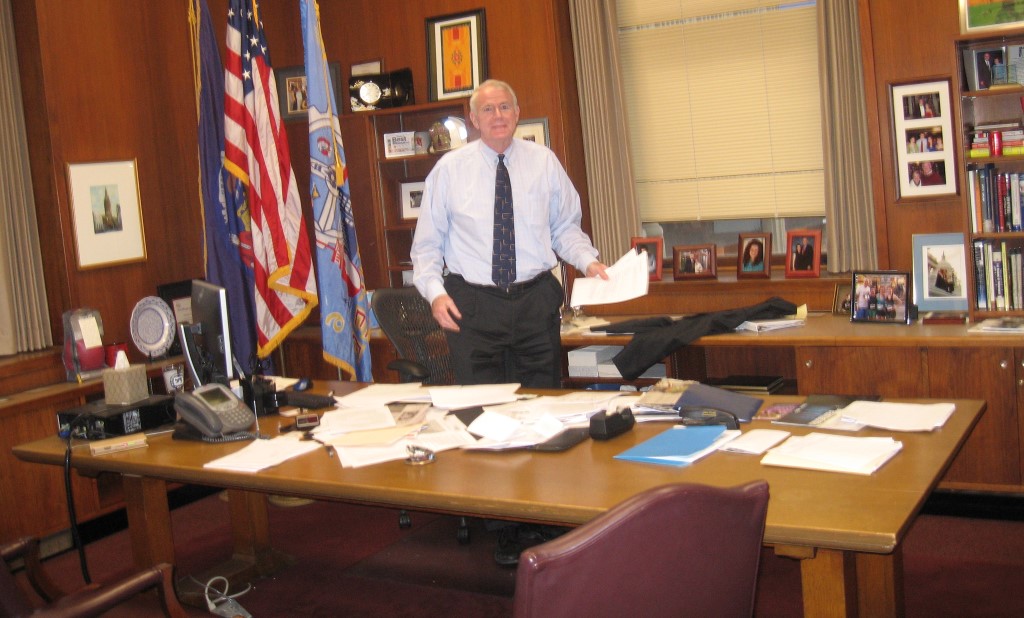 Early in his first term, probably just after opening the City Hall electric bill and getting a shock, Mayor Tom Barrett established a “Green Team” to guide his administration’s efforts at saving energy and implementing ecologically sustainable practices throughout city government. But the mayor gives the credit to others.

“This was grass-roots driven,” Barrett said Tuesday in an interview at his City Hall office, and giving credit for the initial idea to Julilly Kohler. The plan was to have a broad coalition of citizens discuss how the city could meet the upcoming ecological challenges. It was one of the first such initiatives among American cities. At the time only Chicago had taken a coordinated approach to ecological sustainability. One suggestion from the Green Team Barrett created was the establishment in 2006 of a City of Milwaukee Department of Environmental Sustainability (OES).

“I told him he needed to green Milwaukee, and not let Chicago be the only city to brand that,” Kohler remembers. “He moved pretty quickly on it.”

Today, the City’s Office of Environmental Sustainability encompasses everything from the 33,000 square foot green roof atop the Central Library to the 8 inch green LED lights used for traffic signals, to programs helping homeowners install solar energy through its Milwaukee Shines program. 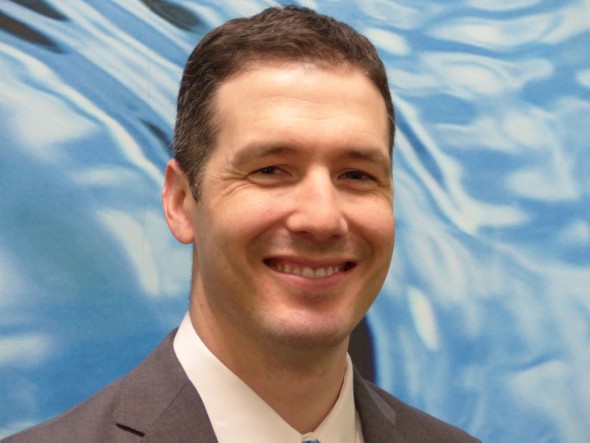 According to Erick Shambarger, the head of OES since June 2015, the mayor’s initiative has been noted by other municipalities. “The mayor has won two climate awards from the U. S. Conference of Mayors” Shambarger noted in an interview at City Hall. “We are a leading city in sustainability.”

“But sustainability is a long word. I prefer the term ‘eco-city,'” Shambarger said.

Shambarger thought he would like “ECO” in the name of his department, instead of “OES”. “We are a government, and governments like acronyms,” he said. Accordingly, the OES will forthwith be known as the Environmental Collaboration Office (ECO). Out goes OES, in comes ECO.

After a decade in business, the city’s sustainability efforts have “established enough of a track record,” Shambarger noted, for the city to hold a “Sustainability Celebration” at Discovery World this evening (starting 5:30 p.m.) to hear of the city’s successes and plans and to introduce the new acronym.

Discovery World was the site of the city’s first shared bicycle station, Shambarger noted. Today, Milwaukee’s Bublr bikes are found in dozens of locations, with more to come this year, thanks in part to a cooperation with his department.

Shambarger touts his office’s success in getting Department of Energy grants from the federal government. There is a population-weighted formula that governs many grants, but thanks to the city’s track record, he said, the DOE “went above and beyond its usual allocation” for a city of Milwaukee’s size.

Federal cash has been used for the ME2 program and the Milwaukee Shines program, both run out of the OES — excuse me, ECO — office. He also credits the bike stations, electric charging stations and other initiatives to federal funds snagged by his team. The office is big on energy audits, and is establishing a comprehensive baseline and benchmarks to measure actions in the future. It is a long-term commitment. 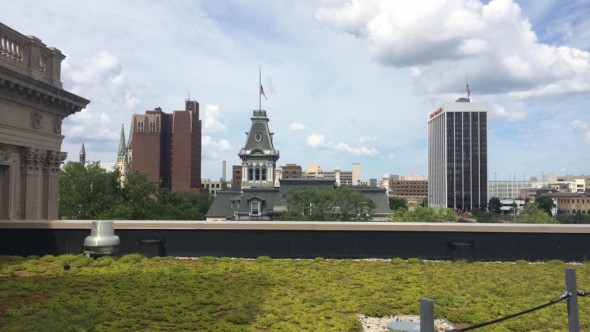 As the city has found with its initiatives in the global water economy, there may be some unanticipated rewards that come from its pioneering efforts in the ecological realm. Shambarger said he expects “new economic clusters of cooperation around energy technologies and water.” He cited the Milwaukee Water Council and the Midwest Energy Research Consortium as key players in this area.

Development clusters would benefit from the city’s proactive measures on bicycle paths, pedestrian friendly development and even ZipCar — all mobility options guided by ecological principles. Shambarger cited the “Eco / Industrial District” of the Menomonee Valley, and suggested the Harbor District near downtown would be the next focus for industrial clusters — perhaps this time with residences.

Barrett says the event at Discovery World tonight “will be a great time to showcase how much we’ve done and accomplished.” He credits Shambarger with continuing the momentum of the office and bringing it “to new heights.” Call it greater green.

The most important benefit of the city’s ten years in sustainability is that the notion “has become indoctrinated in the culture of city government,” Barrett says. “If choices are to be made, then we must seriously consider the sustainable choice first. The goal is that it is to be a continual exercise, and to have it permeate all departments.”

Barrett cited “Toronto, Denver, Portland and Seattle” as cities he thinks about when he studies the issue. All embrace sustainability, he said, and all are doing better than average economically. They also attract the coveted millennial generation which places high value on sustainability. “I include Milwaukee in that list,” he said.

The mayor called sustainability a “positive attribute, not a negative attribute,” disputing the notion that ecological advancements must be coupled with onerous regulations, mandates or financial burdens. It’s a way to sell the city, and “our track record places us in a good place,” he noted.

The city naturally looks for all funding of these efforts it can. “The DOE — they know us,” Barrett said of the federal Department of Energy. The State of Wisconsin? It has not been a fertile source of funding for ecological projects by cities of the First Class, although it has an ambitious superhighway program in place.

The city’ green efforts are part of a “Triple Bottom Line” in which the public, industry and the ecology are all to be considered in financial decisions, with an emphasis on the long term. Barrett sees a public health benefit, a safety benefit, and an ecological benefit to his sustainability measures. These may not be as easy to measure as “direct dollar savings” achieved by swapping out conventional light bulbs for LEDs, he will have considerable long term cumulative benefit, he believes.

Some long term capital investments by the city and other partners are paying their dividends, he said. The sewage capacity of the Milwaukee Metropolitan Sewerage District has “grown far beyond the capacity of the Deep Tunnel,” he said. Efforts at Hoyt Park in Wauwatosa will slow water intrusion into the sewers, all of which eventually terminate in the city of Milwaukee on Jones Island.

The mayor gave credit to MMSD director Kevin Shafer for being able to work with stakeholders throughout the city and suburbs. “We are so far beyond the sewer wars,” that marked the low point of city-suburban relations in the 1990s, he said.

Speaking of green, Barrett also mentioned three city parks created since he took office: the state Lakefront Park, the Rotary Park along the Milwaukee River, and the Three Bridges Park. All have significant water features, reclaimed land and significant ecological systems incorporated into their programs, as you’d expect to be included in the ECO era.

It was eleven years ago that Mayor Barrett launched the Milwaukee Green Team to “build a greener, cleaner Milwaukee,” on February 22nd, 2005, at Highland Gardens, 1818 W. Juneau Ave. I covered the event, reporting that “Barrett made the announcement dressed in a Pink Floyd Dark Side of the Moon tie, which is the closest he’s come to a fashion (or musical) statement in his varied career of public service.”

The first Green Team was led by Robert Greenstreet, and thus might have been called the Greenstreet Team. But wiser heads prevailed.