New Park Will Be Really Green

New Fondy 'storm-water park' will be sustainable, eco-friendly... and green. 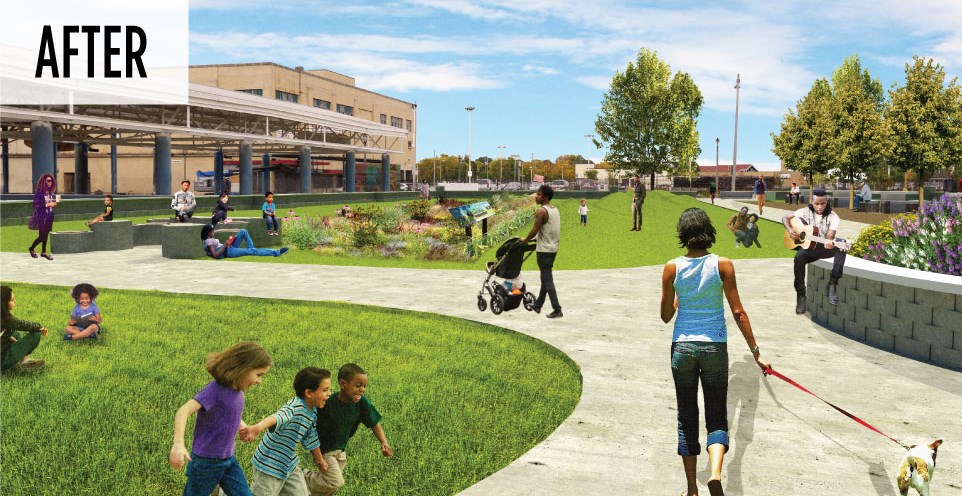 Mayor Tom Barrett unveiled plans yesterday to create a new, super-green park on a vacant lot adjacent to the Fondy Farmers Market at 2200 W. Fond du Lac Ave. This won’t just be a new green space, but a “storm water park” that is sustainable and eco-friendly in a project overseen by the city’s Environmental Collaboration Office (ECO).

At a press conference, Barrett said that “Fondy Park,” as it will be called, will reinvent the block as well as create a gathering place for residents of the Lindsay Heights neighborhood and other nearby neighborhoods. 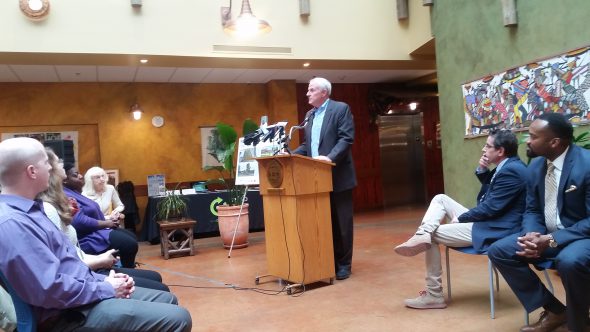 “We want to beautify this area and make it more sustainable,” Barrett said.

The project is funded by the City of Milwaukee, Fund for Lake Michigan foundation, and the Milwaukee Metropolitan Sewerage District.

The project falls under “HOME GR/OWN,” a public private partnership run by the ECO, which converts north side vacant lots into healthy green spaces to drive economic development and job creation and increase quality of life. Since HOME GR/OWN started in 2014, the group has created 30 new pocket parks, orchards, and community gardens from more than 50 vacant lots.

Tim McCollow, HOME GR/OWN’s program manager, notes his team has been working for more than six months on the Fondy Park project. Phase one of the multi-year development plan is scheduled for construction between April and August of this year, according to a city webpage on the project.

“The park you see depicted here is undergoing continued neighborhood outreach, final design and budget approval,” said  McCollow. “We plan on breaking ground in May 2017.”

McCollow said that Mayor Barrett came up with the vision of converting neighborhood liabilities into neighborhood assets. “That thought is really what created HOME GR/OWN,” said McCollow.

The park will encompass three-fifths of an acre, have numerous green infrastructure features such as a “water tower” cistern, downspouts connecting to bioswales, and an in-ground runnel which will increase the quality of water in the city’s rivers and Lake Michigan while reducing local flood events and basement backups in the area. The project team plans to add solar power, seating, trees, native perennials and artistic, educational signage to create a healthy gathering space for the neighborhood.

Fondy Park is an extension of ECO’s North Avenue greenscaping project now underway from 8th to 27th Streets, funded with the Zilber Neighborhood Initiative and city funds, which includes hanging baskets, landscaped lots, and other improvements to support walking and shopping.

Besides several eco features, the park will include a stage as well as foundations that will support a boardwalk and art displays. Moreover, the park will host various programming and activities, in line with suggestions in the Fondy Park Resident Survey. Some potential ideas listed in the survey include summer jazz music, public art showings, movie nights and yoga.

“Just remember that this is the place for community events,” said Ald. Russell W. Stamper, II. “The place for families and to bring people to our neighborhoods.”

The neighboring Fondy Farmers Market and Milwaukee Winter Farmers Market has over 120 farmers and local food producers that serve tens of thousands of customers each year, according to Fondy Foods Center director Jennifer Casey. The vibrant and culturally diverse market has served the neighborhood for more than a century.

“For years, we’ve been hearing from vendors and shoppers that they’d like the vacant lot transformed into a positive space for Fondy Farmers Market goers and the neighborhood,” said Casey, “As director of Fondy Foods Center, I see first-hand the power of creating spaces that bring people together.”

Other partners include Reflo, which is contributing to the storm water management design and ReciproCITY, which describes itself as a mobile cultural center that focuses on community activism, social justice, and urban agricultural issues in Milwaukee.

“Part of our job is to be the glue in a lot of our projects between community partners, city partners, visions partners, residents and mostly young people utilizing this space,” said ReciproCITY director Fidel Verdin.

A second phase is projected to be built between April and November of 2018. 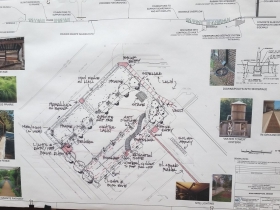 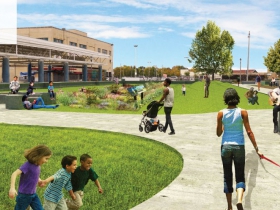 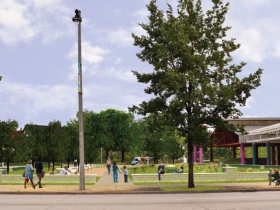 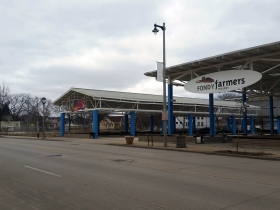 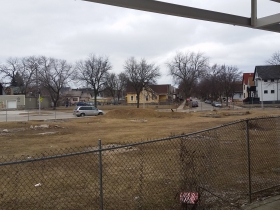 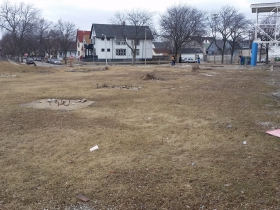 4 thoughts on “New Park Will Be Really Green”