System on track to start service in late 2018, project is on-budget 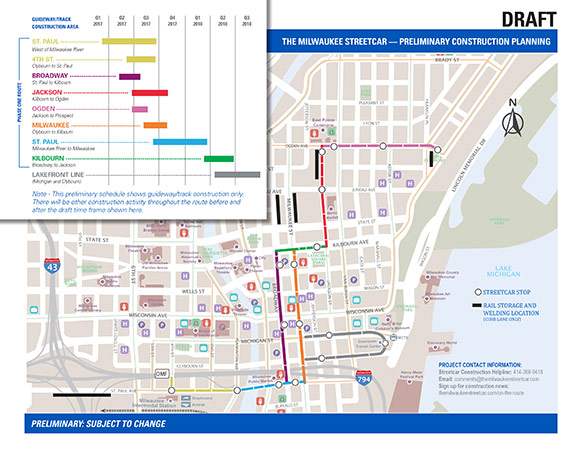 The first track for the Milwaukee Streetcar will be installed in April of this year. The initial segment built will be a double-tracked section running from the Milwaukee River to the Milwaukee Intermodal Station along W. St. Paul Ave. From there, crews will work to build the rest of the route over the next year. Service is on track to begin in the fourth quarter of 2018 following testing.

Kiewet Infrastructure project manager Michael Eithier briefed the city’s Joint Committee on Downtown Streetcar Implementation today on construction staging details regarding what his firm regards as a three phase project. The first phase involves utility relocation (already well underway) as well as strategically staging the steel rails at points along the route and building the foundations for the the overhead catenary system. In late March the city will accept delivery of 474 80-foot long rail segments that will be stored at five points along or near the route in curb lanes.

The second phase of Kiewet’s work involves building the actual track system. That work, which is to begin in April, will involve cutting an 8-foot wide and 2-foot deep segment of the street out and installing and welding the rails. From there a new concrete slab will be poured around the rails. In select situations an entire intersection will be rebuilt. Eithier stated that “in almost all cases we’ll be able to keep one lane of traffic going at all times.” The project manager also noted that access to parking garages and other entry points along the route will be maintained throughout construction.

According to Ethier and Department of Public Works commissioner Ghassan Korban the construction schedule reflects meeting with stakeholders along the route to accomodate their needs. This includes the section along E. St. Paul Ave. in the Historic Third Ward being finished before Summerfest begins in late June and the section along E. Kilbourn Ave. not commencing until after the summer festival season and Bastille Days.

Kiewet expects to complete construction in the second quarter of 2018 to allow for testing to commence. The Milwaukee Streetcar Maintenance Facility, to be built under Interstate 794, is scheduled for completion before the end of 2017. The facility will be completed in advance so that the city can safely store the vehicles delivered by Brookville Equipment Corporation.

As the Kiewet project manager said, “it’s going to be a very busy 2017 building the guideway.”

Utility work, which has been underway for over a year, will continue through the early stages of the track construction. Crews from We Energies are performing the work on-budget, according to monthly status updates given to the city says Ethier. Approximately $15 million is in an escrow account and dispensed on an on-going basis. Contractors for We Energies and other utilities are on schedule with their work, and have completed approximately 80 percent of the planned relocations.

Hiring About to Start

As I reported in January, Kiewet is gearing up for a major hiring push for the streetcar. The firm is securing agreement with a number of sub-contractors. Kiewet will need to subcontract with a number of certified disadvantaged business enterprises (DBE) to achieve the 21 percent of project costs goal in that category, a goal that Eithier said they’re on track to meet.

Hiring of actual workers, approximately 50 percent of which will work directly for Kiewet, is slated to begin soon. An initial outreach event generated substantial interest according to Eithier, but alderwoman Milele A. Coggs pushed to deliver more demographic details on who those individuals were and continue to work on expanding their outreach efforts. The project council approval requires 40 percent of the project hours to be completed by city residents qualified under the city’s Resident Preference Program for un- or under-employed individuals. Potential streetcar workers are receiving training from WRTP/BIG STEP through a transportation construction class.

Specialized crews from out-of-state will be used to do the flash welding that connects the rails. According to Korban and Eithier companies that do this work use specialized equipment and travel the whole country doing their work. According to Eithier “it’s a very unique piece of work, not something done very regularly.” Students in Milwaukee Area Technical College‘s welding program will have an opportunity to learn from the crews when they’re here

The lakefront spur of the Milwaukee Streetcar will see construction start later than the system’s main line. Guideway construction along E. Michigan St. and E. Clybourn St. isn’t slated to begin until the second quarter of 2018. Utility work will proceed the actual track construction though.

Service on the lakefront line is planned to begin in the fourth quarter of 2019.