The Problem Of Architecture Review Boards

All the rules for developers kill bad buildings. But do they also kill the great ones? 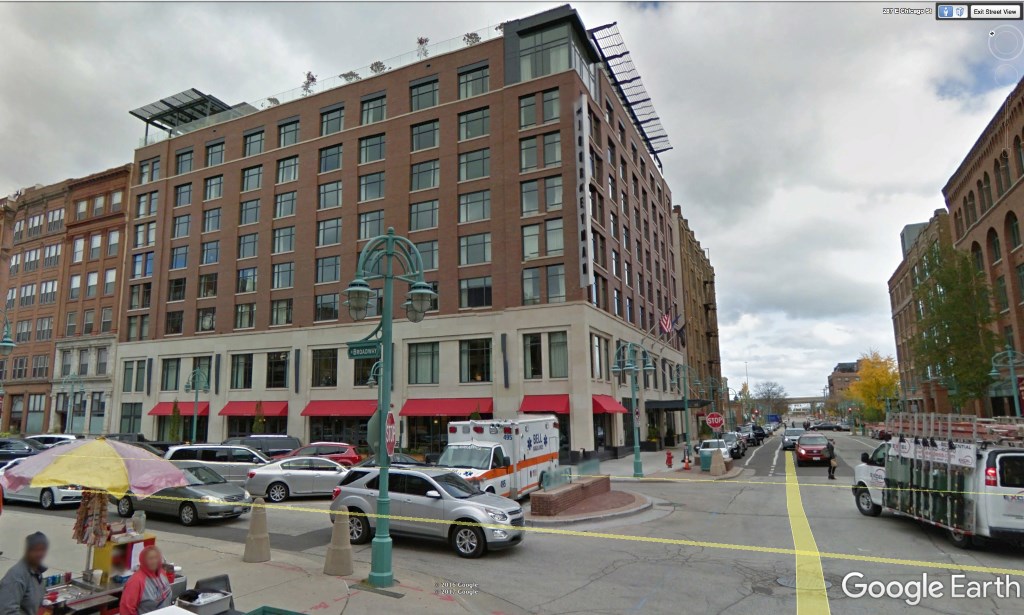 The Kimpton. Photo from Google Earth.

We are talking about buildings these days. Mayor John Norquist started it when there wasn’t much to talk about. Cities had lost their mojo. Real estate developers were making their money building cul-de-sac communities and big box stores along the freeway.

Norquist thought buildings mattered in a city. Bridges and streets too. All of which, incredibly, seemed like a new idea at the time.

To stop the bleeding Norquist and his planner Peter Park eventually set down a set of urban design principles. Most importantly, the idea that buildings should not disrupt the architectural fabric of their neighborhood. The emphasis was on “background buildings,” as they’ve been called.

The blending principle was a reaction to the 1960s to the mid 1990’s, when urban architecture barely existed because cities didn’t seem to have a future.

Today there is a growing constituency for architecture in Milwaukee, especially people who see new buildings through their apartment windows. And read Urban Milwaukee for that matter.

But what is a good new building? Norquist didn’t really answer that question. We didn’t know what to do in cities at the time.

Nor should he have. Mayors are not czars. He did lay down a framework to make buildings less bad that has been carried forward by the administration of Mayor Tom Barrett. It’s been enshrined with increasing vigor by community groups, Architectural Review Boards (ARB) and the Historic Preservation Commission (HPC) that lords over more than 25 districts in Milwaukee.

Norquist’s guiding principle was that buildings should fit the character of the neighborhood. That includes scale, materials, and style. Today how things fit into the existing fabric of a city dominates the discussions of the ARBs, HPC, and the articles in Urban Milwaukee about real estate development.

Norquist wrote the playbook. His “new urbanism” is called “good urbanism” today, which takes on a preservationist bent because blending into the established character of the neighborhood usually means the new should reflect the old — Milwaukee’s pre-World War II buildings made of mortar and brick.

Now Walker’s Point is thinking of setting up their own ARB, like the Third Ward — the oldest and most powerful architectural review board in the city. Which brings us to a new building, the Kimpton, an upscale boutique hotel on the corner of East Chicago and Broadway. A headline in the Milwaukee Journal Sentinel called it “a landmark for Milwaukee’s Third Ward.”

There is nothing wrong with the building. It’s proportions, massing, and composition are drawn from the buildings next door and across the street. Its red brick middle and top are slightly inset. The corner is slightly articulated. The Kimpton has a two-story white-stone base. It’s all just enough design to not make a difference.

The Kimpton is faint but it doesn’t look cheap. Like an old song played on synthesizer rather than by an orchestra, it resembles the rest of the neighborhood. The materials and patterning follow a formula derived from the venerable brick buildings of the Third Ward.

The Kimpton looks respectable. It’s nice. A fine young building with excellent manners that doesn’t call attention to itself.

Which is to say the Third Ward’s tallest building on a central corner of the neighborhood is a wallflower.  Has no character of its own. This “landmark” can’t mark anything because it’s not anything in particular.

By all accounts the Kimpton aced the ARB approval process. “The larger the project, the less of a problem. Big developers very quickly learn the system”, says Robert Bauman, the alderman for the Third Ward and Chair of the ARB.  “It’s good business” for them to learn the rules, “time is money,” he adds.

Guidelines and oversight has forced developers to hire better architects to get their projects through the process. The Kimpton’s local architect, Kahler Slater also blended the controversial Marriott Hotel into the background of an “historic block” on East Wisconsin Avenue. Making non-buildings has become a feature of successful architectural firms in Milwaukee. Their business is to win the game according to the rules.

The powerful Third Ward review board has perfected the background building. “New buildings in the Neighborhood”, the guidelines state, “should be designed using similar materials (brick, metal, glass, stone) to those used on existing buildings and respect the mass, rhythm, height, robust scale, and ornamentation of existing buildings.”

That’s not all. The Design Guidelines For The Historic Third Ward Neighborhood is a 103-page document that could be the syllabus for a graduate school level introduction to the field of urban design circa 1990. It has an extensive bibliography and illustrated appendix. Further reading includes Jane Jacobs classic The Death and Life of American Cities and the Christopher Alexander’s book A Pattern Language.

Following Alexander’s rules of order, the guidelines state: “Emulating the human body, one of the tenets of architectural composition is the idea of a building having a base, middle, and a top. This has been borne out in the history of architecture for thousands of years.”

Buildings don’t have to emulate the proportions of the human body. What is borne out by history is buildings look like buildings made with the materials, technology, and fashion of their time.

The Calatrava looks like ship laying down and the head of cobra when it stands up. The new Northwestern Mutual Tower looks like a skyscraper.  Ranch houses in Milwaukee look like ranch houses.

There is no holy grail for architecture. Every rule for composition in the history of art is eventually broken.

The Third Ward looks like commercial buildings built around the turn of the century in the American Midwest. Now a hundred years later the Third Ward preserves the character of this neighborhood by making a characterless building?

This process can only go on so long before a place dilutes itself. The blending principle can become a broad spectrum insecticide that kills off both the bad and the good stuff. Pretending to be old because you are afraid of the new (neophobia) inevitably results in the blandness of the Bayshore Town Center or Mequon.

Bauman concedes that could be a problem: “There is a potential for that. Creative people (on the ARB) must use good judgment.” Then Bauman added, the “guidelines could be adjusted in the future.”

But oversight committees trend in the other direction, to make more rules, not less. It’s just the nature of beast. What is oversight anyway other than being on alert for something bad?

Bauman told me the Third Ward ARB prohibited a corner store from putting signs of brands on the inside of their windows. The board was overruled, however, by the City Attorney on the grounds it violated the shop owner’s First Amendment right of free speech.

This level of fussiness may tell us something about how grim this review process has become. What was needed back in the 1990s, when Norquist and Park were creating these rules, may not needed or may not need to be as rigid. Something can look good in its place and not look like the building next to it. Give architects a chance to fill in the blank with something truly imaginative.

Unlike 25 years ago, the city is booming with development and no longer needs to play such strong defense, to so stoutly defend the ramparts of urbanism. The Third Ward would have been a perfect place for a landmark building that broke the rules. The fact that this is not possible — and was apparently never desired — seems a major issue for the future of Milwaukee.

16 thoughts on “In Public: The Problem Of Architecture Review Boards”