The 136-year-old building, the clientele, the atmosphere are all unique. 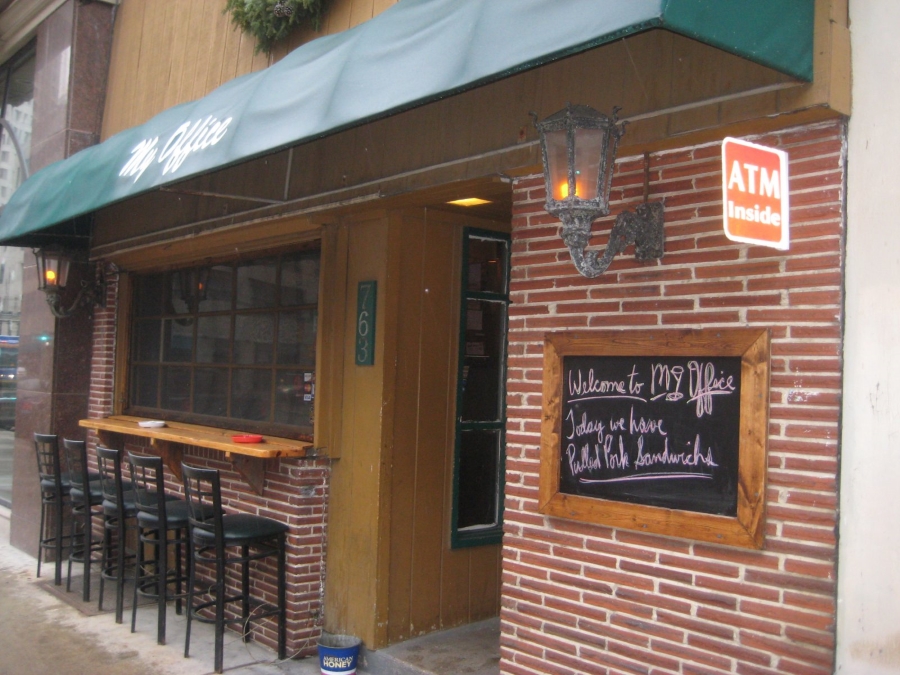 My Office. Photo by Michael Horne.

When folks ask me where my office is, I tell them that it is located right upstairs from My Office. Both are downtown in the Colby-Abbot Building on North Milwaukee Street.

The place I call “my office” is where Urban Milwaukee.com conducts its business. “My Office” is the saloon downstairs. I’ve worked out of both of them, and have gotten a good deal accomplished at each location, depending on what I was up to at the time.

The tavern is mostly located in an 1880 commercial building with the street address of 763 N. Milwaukee St. It is squeezed between the magnificent 1883 Colby-Abbot Building at 759 N. Milwaukee St. and the 1882 former livery stable to the north. It is surprising that this little two story pile of a building survived between these two much larger structures.

This loneliness of course, makes for much of the charm of the place, which had the original street address of 447-Milwaukee Street. It is safe to say that this is the sole remaining dive bar downtown east of the river. [Jim’s Time Out, a classic in its own right, has the field to itself on the West Side.] My Office has had its clever name since 1975, when Downtown still offered an array of neighborhood watering holes of exceedingly modest stature, if not character.

You might as well drop in now and take a look at a bit of Milwaukee history, played out in real time today. With the boom of construction in the neighborhood, and a streetcar soon to run right in front of the place, there’s no guarantee that the highest and best use of this prize location will be as a shot-and-beer joint in perpetuity. ‘Tis a pity.

The bar opens at 7:30 weekday mornings, when breakfast is served. You want a Bloody Mary with that omelette? You’ve got it! Early morning tavern hours were generally a concession to the third-shift industrial workers, but they had a role in the financial district as well.

This place opened after Prohibition as “The Ticker,” and you can imagine the malt brokers, mortgage traders and stock pickers all down here getting a head start on the markets. During Prohibition’s early days, it was a licensed Soft Drink Parlor operated by Clayton R. Southgate. From 1923-25, Hans Peterson ran his soft drink operation from here. The space was vacant in 1926, and then operated for one year as the Annex Restaurant, followed by another stint as a soft drink parlor run by Thomas Arietta. From 1929-1932, this once-prime space was vacant. 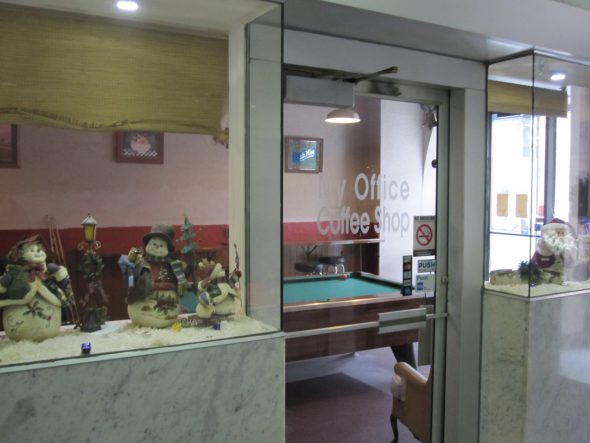 Door from the Colby-Abbot Building. Photo by Michael Horne.

The bar has two entrances, one of which is directly through the marble walls of the Colby-Abbot building, where the pool table resides in a spacious, well-proportioned room with a lounge chair, a television, and a little nook that conceals a dart board and a table with a reading lamp.

Here you have a high-ceilinged Milwaukee saloon that has seen its accumulation of many things over the years. Much of the collection ranges to the beer sign category. Do take a note in the entryway and admire the Country Club Malt Liquor lamp. Country Club is a Pabst brand, established in 1951, when there may actually have been country clubs serving malt liquor. The beverage is still being produced, but fortunately is not available in Wisconsin. 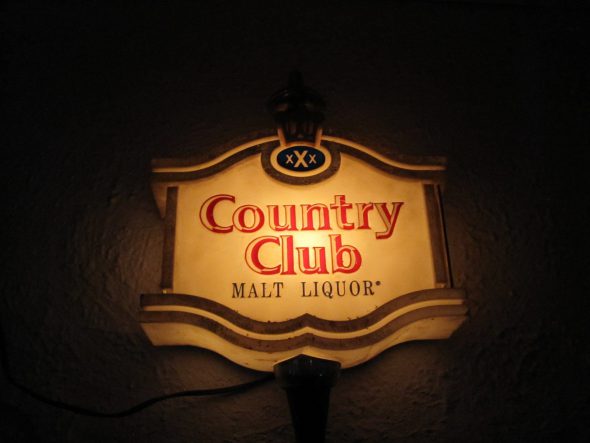 The bar runs on the south wall of this room. It has a few seats parallel to the east wall, which is outfitted with a little rail and some stools. Beyond is a garage-door type assembly that opens in good weather, where a companion rail faces in from the street. You can be inside, and your tablemate can be outside under this setup. That’s just plain fun.

The abundant Christmas decorations tell us that this is not the time for outdoor drinking, but the stools are still out there if you are up to the challenge. Instead, venture to the bar itself and grab yourself a seat. This might be your location until the end of the evening if you pick up the bartender’s challenge to have a couple rounds of dice. Grab the dice box and go for it. I’m out; you’re buying.

Beyond the bar, the room has a number of tables where groups of four can dine in what is almost a cafe setting. You can ask for a menu from 7:30 a.m. to 2:30 p.m., but you are just as well off ordering anything you want from the ingredients at hand. If it’s meatloaf day, they’ll tell you. Inquire about the soup. Just the other day, the landlady, Patti Keating Kahn, grabbed a quick lunch of a Corned Beef sandwich.

The stock traders and the barley merchants are long gone from the place, but the daily traffic has a certain rhythm that includes a good proportion of the service staff of every other joint downtown, including the Milwaukee Club, the University Club, the Woman’s Club of Wisconsin, the Milwaukee Athletic Club, the Wisconsin Club and practically every other club or restaurant you’re not invited into or can’t afford. It is always a good sign to find a bar where the service industry gathers. Believe me, these folks don’t head to Bacchus after work.

As it gets close to the end of the workday, the business sees its fair share of the remaining white collar workers who still maintain the venerable tradition of tying one on before heading home. Most of these folks live downtown and walk everywhere. For them, this is the neighborhood tavern (and its Walk Score is “Walker’s Paradise”). This time of year, the end of the workday might as well be at 1 p.m. Friday, since the place was packed with a Christmas Party on a recent visit.

There is also another refreshing demographic in the number of practical type people who come here. These include the folks who keep the mechanical systems of the downtown buildings in working order, those who clean up after the messes made by the white collar workers, and, recently, those who construct the buildings themselves. You’re seeing more and more of the green-vest types during lunch nowadays.

While everybody is doing their thing, take a look toward the back of the room. The floor is up a step here, where the back wall of this building used to be. There is yet another addition to the rear. This space is a complete mystery to the visitor.

As befits a dive bar, things are casual here, and this is not the place to put on airs, especially since you are surrounded by people who wait on others far better than you over at the various clubs. If the main bar gets too busy, best to head over to the pool room. This table is one of the best-situated in the city, since you can attempt any shot without interference. The sticks are wooden and straight, and you can usually find some chalk on the wall by the coffee maker.

Whether at work or at play, I always have a good day at My Office. Now, rack them up. I break because I won the last game. 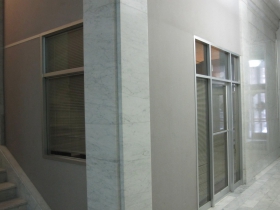 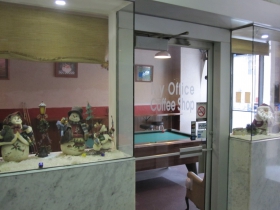 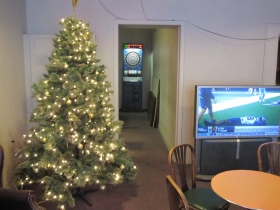 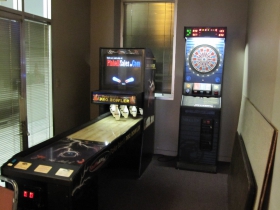 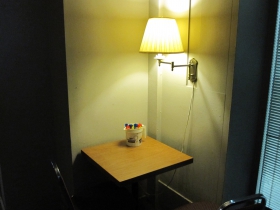 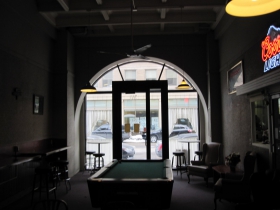