No Breaks For Jim’s Time Out

There are very few wooden buildings remaining in the heart of downtown. Yet here we have a survivor in this 1,986 square foot 1-½ story building that has sat at 746 N. James Lovell St. for at least 120 years, while downtown developed and redeveloped all around it.

Not only has the building survived, but so has its use as a saloon, catering to yet another breed of survivors, namely those old-timey downtown folks who need a place to take a time out from the bustle of commerce and business. This includes a broad subcategory of customers who maintain no active participation in commerce or business, but who find it convenient to have a cheap, dependable bar that opens at 11:00 a.m. and keeps on going until closing time, seven days a week.

You will be excused if you have never noticed Jim’s Time Out on your travels. From 1972 until just a week ago a 158,000 square foot, 6-story reinforced parking garage obscured it from sight from the east. The garage was less than a foot away from the bar. To the north, most of the building remains obscured by a large billboard, and a comparatively substantial brick building hides it from the south.

Really, the only people to have a good view of the place are a few residents of the Library Hill Apartments and the firefighters on duty at the headquarters of the Milwaukee Fire Department across the street. The fire department has come in handy on occasion, like that time in 1959 when a short circuit blaze created $102 in damage, or the 2005 fire in an apartment above the saloon that Sid Grinker Co. cleaned up for $850. The damage undoubtedly would have been worse if the building were not so close to the firehouse. Heck, with good hose aim they could fight blazes here without even leaving the station.

Now the bar is much more visible with the demolition of the parking structure—imagine: a 42 year old solid concrete building was outlasted by a little wooden shack the better part of a century older. That’s staying power. Whether Jim’s Time Out will continue to hold on is a matter of community thirst, real estate economics and demand for downtown development space. It sits on a 1,750 square foot lot; the adjoining property that once held the parking structure is 20 times the size.

The change in the property is striking. A visit to the tavern’s patio—a zero-maintenance area, to be sure—offers a view of the convention center just a block away. For a couple hundred bucks, the owners of Jim’s could probably put a banner on the east wall of the building, just to let conventioneers know the place is there.

The rest of us should pay a visit anyway, especially for those who enjoy places that are still around, defying the odds.

For many years the bar and business was owned by Susan Bakos, who ran the place as the Ding Dong Bar, a name that should never have been retired. In October 1955 she wanted to add an apartment and remodel the existing one, but she later told the city she had “given up the idea of a second apartment but would like to relocate the kitchen to the front of the building.”

The kitchen eventually got relocated to nowhere, and today Jim’s Time Out derives only 1 per cent of its revenue from the sale of food, and that food is limited to chips and Wild Bill’s brand beef jerky.

In 1971, the bar was called “Susan’s Tap,” and featured a Schlitz sign above its front picture window. By the next year the giant parking structure hid the tavern, and caused some drainage issues.

In 1982, operating as Ding Dong, the tavern got a new bar sign—a Heileman’s Old Style sign. It still remains, while Old Style beer is just a memory.

By 1986 it acquired its current name. Brothers Steven and Mitchell Lechter paid $80,000 to buy the building, and a guy named Jim Pappas ran the business until just about a year or so ago when it was sold to the current operators, Samuel L. Berman and Stephen G. Gilbertson. [See “Plenty of Horne” July 10th 2013.]

Berman is one of the owners of Sabbatic, and Gilbertson is a long-time bartender. They made some changes to the tavern, but not too many to eliminate the diveyness of the place. For example, a sign on the outside of the men’s room door still reads “Please Aim.” You don’t see a sign like that at Elsa’s, to be sure.

The tavern got a bit of a scrubbing, particularly behind the bar. The odd little “Nut Hut” vending machine that used to sell salted cashews is a sad casualty of the new regime, but the impossibly small red-felt pool table in its impossibly small poolroom niche remains. Of necessity, there are short sticks provided.

A new tapper offers a wider selection of beers than previously, when this was a place where you could get yourself a mini-pitcher of Point Beer and paid a premium for the privilege. Now there are 20 bottled beers on display. A mirrored back bar has top and not-so-top shelf liquors, with the white booze on the left and the brown booze on the right. There are 2 flat screen televisions, an ATM and a sign announcing, “Beer: Helping Ugly People Have Sex Since 1842.” Five devices for amusement only entrance some customers.

There is an American flag behind the bar, and 13 hooks on the wall for hanging coats. The bar has 12 padded, swiveling red stools, including one at the end of the bar for the bartender during slack times. The Formica bar top is well worn, as are the linoleum tiles where you rest your feet. The walls are deeply and roughly plastered, perhaps hiding decades of plaster cracks. (In 1949 the whole building was underpinned and raised a foot or so.)

Wall hangings include the Packers and Leinenkugel’s Honey Weiss. The bar also has three round tables, with two seats each. One of the tables is right at the picture window, affording a nice view of the Fire Department across the street. There is a Point beer sign in the front window as well.

But the clean-up of the bar was within reason—no need to go overboard. For example, the bar still has a Smokeeter, good and grimy, back from the days when you could smoke in the bar.

During the day, your bartender is Stella Ivory. She has worked here since Cafe Melange closed over a decade ago, and still keeps in touch with Larry Krueger, who used to be her boss there until he moved to Valders to take his turn as a lumber baron in the family business. At night things pick up a bit as Jim’s Timeout gets its share of service industry personnel and the occasional Marquette University graduate student. Tommy Sorensen, another veteran of the Milwaukee tavern scene, largely serves those folks.

It is also the nearest tavern to the jail, which provides a further measure of entertainment. Back in the old days, you’d leave the municipal lockup with nowhere to go. Jim’s would cash your check, let you use the payphone, and serve you a couple of beers to get you started on your next trip to the drunk tank. Many of these lovely traditions have died—the ATM takes care of the check cashing, and nobody knows what a pay phone is these days. 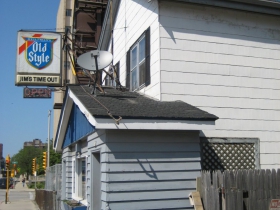 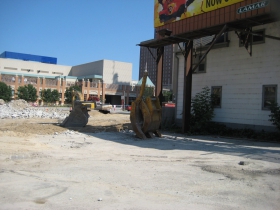 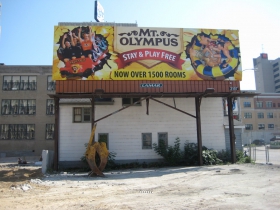 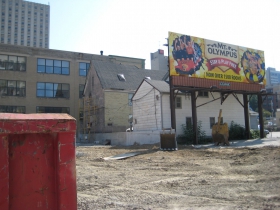 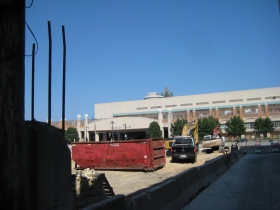 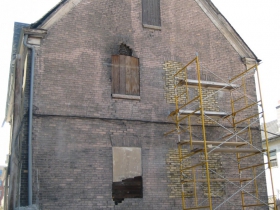 0 thoughts on “Taverns: No Breaks For Jim’s Time Out”