In 2008 a fellow by the name of Clark Rockefeller was arrested in Boston for kidnapping his 8-year old daughter. Police quickly learned that he was actually German immigrant Christian Gerhartsreiter, an impostor with many identities. 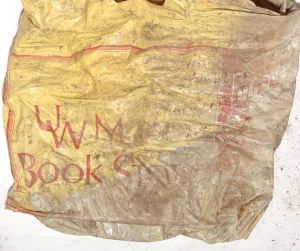 Key to the determination of Gerhartsreiter’s guilt in the murder case was a piece of evidence with Milwaukee connections — a UW-Milwaukee bookstore bag dating to the late ‘70s-early ‘80s that contained the severed head of the victim, John Sohus. Police recovered the head in 1995 during excavation for a swimming pool at a home where Gerhartsreiter lived at the time of Sohus’s death.

Gerhartsreiter claimed to have attended UWM from 1979-1982 when he lived in the area, calling himself Chris Gerhardt. He used a ruse to board at the home of an architect in Delafield, whom he eventually stiffed for his rent. He probably bounced around to other homes here before he had a quickie marriage for the sake of a green card. With that in his possession, he took off to California, leaving his wife behind, where she remains.

Todd Lassa, now Executive Editor of Automobile Magazine, attended UWM at the time and served as a witness to the Madison wedding of Gerhartsreiter. Lassa tells Urban Milwaukee:

“I knew him as Chris Gerhardt. …  and he passed himself off as the son of a prominent German industrialist / chief officer. I do remember he named a real, known German company as his father’s employer, but I don’t remember which one it was.”

Delafield is in the heart of Lake Country, and an unlikely location for a UWM student to board, considering its distance from campus. But Gerhartsreiter may have been trolling for upper class connections here. But he wasn’t as successful here as later in Boston and New York, where he somehow managed to join exclusive clubs. Shall we say that his name was never enrolled upon the list of members of the Oconomowoc Lake Club and leave it at that?

Lassa also has other memories of this incipient phony: “I’m also a bit mystified that he stayed at the Delafield architect’s home while at UWM. I think of that more as a suburb of Madison, though that might explain why he was married by a Madison judge. When we were friends, briefly, I met him once at an upper-middle class home near Brookfield, where he said he was staying. I think it was in Elm Grove. He explained it as belonging to an aunt, or some relative who had moved to the States years ahead of him. The one time I was there, he was at the home alone, and must’ve had his own key.

“I’ve also wondered how he got money for his car. Though it’s described as a “beater” by the time he got to San Marino, California, it was no more than a year old when he was at UWM. Only adult students and kids with fairly rich parents drove cars that new/nice when I was there.”

[If any readers have memories of Chris Gerhart, please feel free to send them along to plentyofhorne@gmail.com]

The Governors are Coming!

The National Governors Association is holding its Summer Conference 2013 August 1-4 at the newly re-renamed Wisconsin Center. The governors were last here in 1998, when Tommy Thompson managed to have the Great Circus Parade rescheduled to coincide with the conference. Gov. Scott Walker may not be able to pull off such a grand spectacle as Thompson, but he will have the job of hosting most of the nation’s governors.

In 1998 conference attendees were given a book bag filled with corporate goodies, and exhibition halls were filled with displays of vendors to state governments. The convention that year brought 1200 people to town, since governors do not travel light. It produced an estimated $1.8 million in direct revenue.

If the spectacle of suits in power and their aides does not move you, perhaps you might care to check out Mitchell International Airport during the event, since governors tend to travel by personal jet, and they have to park them somewhere.

Investor Warren Buffett, saying he was pleased with the good work his three children have done with the foundations he funded for them, doubled his annual gifts, it was announced this week.

The NoVo foundation, headed by former Milwaukee resident Peter Buffett and his wife Jennifer, will receive 1.2 million shares of Berkshire Hathaway “B” common stock to add to their portfolio. The gift is valued at approximately $138 million. As of 2011, the most recent year for which information is available, the NoVo foundation had $243 million in assets. With the new gift, NoVo will be just about $100 million short of the assets of the conservative Lynde and Harry Bradley Foundation, Wisconsin’s largest.

The NoVo Foundation’s 2010 grants of about $50 million included over $2 million to the Greater Milwaukee Foundation to further the NoVo Foundation’s charitable purpose of “fostering a transformation in society from a world of domination and exploitation to one of collaboration and partnership, focusing on initiatives to empower adolescent girls, end violence against girls and women, advance social and emotional learning and promote local living economies.” (This sounds very un-Bradley, doesn’t it?)

Why Paint a New Street? 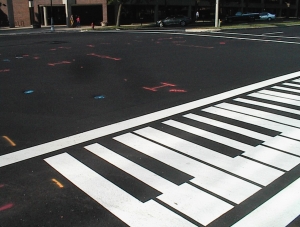 Last week the city’s first “whimsy walks” were laid around Cathedral Square. Twenty-four hours later the fresh asphalt had been disfigured by fluorescent paint used to mark buried utilities. These markings usually appear just before a street is torn up for utility work. But certainly coordination between the city and its utilities is not so bad that a brand new street would be dug in a non-emergency situation. So, what gives?

According to Sandy Rusch Walton, of the Department of Public Works, “These are utility markings for Bastille Days’ tents and vendors.  These markings are required by state law.  DPW asks each ‘locator’ to be cognizant of the surroundings when marking for utilities without compromising safety.  The standard ‘locating’ paint lasts about 60 days based on weather and traffic; chalk paint lasts significantly less time.”

Indulgence Chocolatiers, 211 S. 2nd St. was recommended for approval by the License Committee for a Class B tavern license at its location just around the corner from the Water Accelerator, which could use a nearby watering hole. The block served for many years as a popular saloon destination when the railroad first came to town. … Peggy Magister of Crazy Water hopes to duplicate her success around the corner with AP Bar and Kitchen, 806 S. 3rd St. … Samuel L. Berman has applied for the license at Jim’s Time Out, 746 N. James Lovell [7th] Street. The tiny little dive will see some big changes in its visibility when the hulking parking garage just inches away, is torn down. … Bollywood Grill has been granted a tavern license for its proposed location at 1028-1030 N. Jackson St., just across from Juneau Village. This may be an inspired format for the location, which has been dead for decades. (Anybody remember the Marc’s Big Boy and Captain’s Steak Joynt there?)

See You At Poets’ Monday

Poet Tom Jones will be the featured reader at Poets’ Monday at Linneman’s Riverwest Inn, 1001 E. Locust St., Monday, July 15th, 7:30 p.m. Tom has been a longtime family friend; he and my uncle Keith Krause, Sr. were each other’s best man at their weddings. Keith also helped Tom with his translation of poems by Miguel Hernandez. His most recent book is “Nearing Palenque.”  Tom’s heart has always been in his poetry, and he was happy to leave behind the trappings of a legal career to move to Arizona where he has taught high school on a reservation in Tuba City for a couple of decades. However, in summer he returns to Wisconsin to hang out at Green Lake with other Chicago natives, and we’ve finally been able to snag him for the featured spot at this neighborhood institution. I will be dropping a few lines of verse as well, so I look forward to seeing you there.