Can Trump Voters’ Pessimism Be Overcome?

Identity politics failed. Democrats need policies that help all, regardless of race, region.

An earlier Data Wonk article pointed to the deep pessimism of Trump voters, especially compared to Clinton voters. A strong majority of Trump supporters agreed that life had gotten worse for people like them in the last 50 years and that things would continue to deteriorate in the future.

In the recent election, Donald Trump succeeded in turning several traditionally Democratic regions, notably a plurality of Wisconsin voters, red by promising to turn around the economic fortunes of regions and workers who’ve lost out because of shifts in the economy. A post-election analysis by Richard Shearer of the Brookings Institution suggests this loss of Democratic votes is underpinned by economic distress.

Shearer looks at the growing urban-rural divide both in voting patterns and economic performance. The chart below shows his results for all metropolitan areas, large metros, small metros, and rural areas. (He also subdivided the results for large metros, including primary cities, inner and outer suburbs, and exurbs). As the blue line in the graph shows, Trump lost votes compared to Romney in metropolitan areas as a whole, and particularly in large metros. However, he outperformed Romney in small metros (those with fewer than 500,000 people) and did especially well in rural areas.

As the chart also shows, Trump’s gains reflect areas that are suffering economically. The number of jobs has still not returned to the pre-recession peak in the areas where Trump gained (orange line). The average wage is also far lower in the Trump-supporting areas (gray line and right axis). 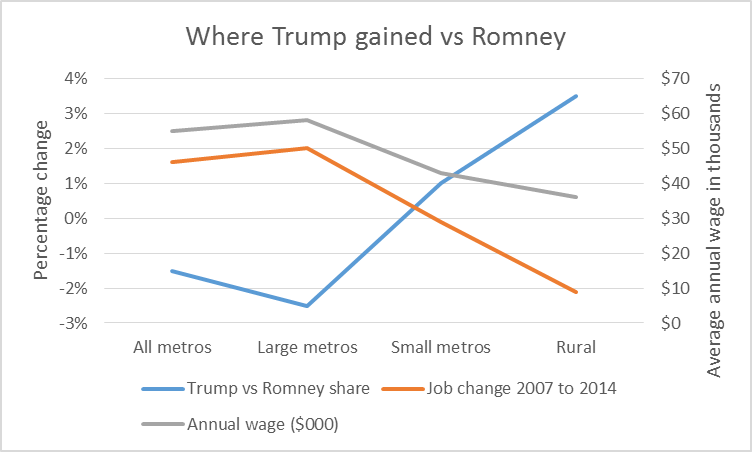 Where Trump gained vs Romney

The term that is commonly used to refer to the voters switching to Trump is “white working class.” This term, while technically accurate, is unfortunate in my view. It racializes the issue, obscuring the more important driving force behind the switch of voters from Barack Obama to Trump. They are responding to real problems: the loss of jobs leading to the depopulating of rural areas and the resulting growth of a variety of social problems.

Racializing problems also feeds one of the least attractive tendencies on the left: thinking of the population in terms of ethnic groups rather than individuals. This makes it harder to work for a race-blind society. From a practical viewpoint, it also makes it harder to sell reforms if they are regarded as favoring a particular group. Identity politics probably cost Clinton the election by turning off voters living in the areas hard hit by economic change. Only Trump was seen as taking their concerns seriously, rather than dismissing them as the product of white racism.

Trump’s victory has set off squabbles among Democrats. Should more be done to reach out to working class whites? Or should more be done to convince the emerging Democratic base to turn out? In my view this is the wrong choice, both morally and politically. Instead, policies should be developed to help everyone who is left behind by economic changes.

It is worth noting that the areas which put Trump over the top are largely victims of the free market in action. Both manufacturing and agriculture over the years have had huge increases in productivity. Generally productivity increases are considered a good thing—the prerequisite for increased prosperity. However productivity is defined as the ratio of outputs to inputs, for instance the number of washing machines produced to the labor used to make them.

If one is among the washing machine workers, a productivity increase is only desirable if another, better job is waiting. For the people living in the Trump-supporting areas, too often that other job has not been waiting.

The recent decline in coal mining jobs, another area where Trump has promised to reverse history, is indeed partly the result of concern over climate change. However, this is only part of the story. The long-term decline in coal mining jobs started long ago, originally driven by increases in mining productivity. More recently, new technology has lowered the costs of coal’s competitors, whether natural gas from fracking, or solar or wind energy. Growing concern over pollution, particularly in China, coal’s largest market has also cut the demand for coal.

So far, Trump has given no indication that he knows how to help the people who live in regions hurt by changes in the economy. Several of his promises would make their situation worse, but it is unclear which he was serious about and which were aimed at winning.

For instance Trump promised to repeal Obamacare and replace it with “something terrific,” but it appears that he gave no thought to what the replacement could be. Simply repealing Obamacare would mean that those who gained insurance due to Obamacare would lose it.

After meeting with President Obama, Trump declared that he liked the Obamacare prohibition against denying people coverage because of their pre-existing conditions. But eliminating provisions aimed at pushing healthy people into the market, like the individual mandate, could easily push the individual health insurance market into the well-known “death spiral.” Knowing they are guaranteed coverage, some healthy people would wait until they get sick to buy insurance, driving up premiums. As a result, even for healthy people, individual insurance could be very expensive or unavailable.

A second example is Trump’s proposal for a drastic tax decrease mainly directed at the very wealthy, such as himself. Much of Trump’s appeal was based on resentment of elites. Certainly very wealthy people count among the elites, and they have managed to get a steadily increasing share of the benefits of a growing economy. Government policy aimed at accelerating this trend is hard to justify.

An argument is made that low marginal rates for the wealthy are the secret to prosperity, but the evidence is not there. If the goal is to stimulate the economy, then aiming a tax decrease at low-income people is likely to be more effective. For example, Moody’s Analytics calculated the marginal propensity to consume of people at different income levels. Those in the bottom were estimated to spend 86 percent of any tax savings while those at the top would spend less than half. 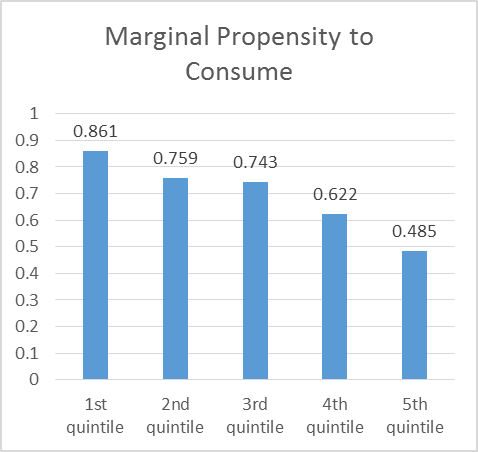 During the time that Bill Clinton was president there was a bipartisan attempt to end welfare. In order to receive aid, people were required to show they were actively job-hunting or getting training. This reform worked remarkably well so long as the private job market was strong.

Missing, however, was any commitment on the part of the government to step in if the private sector fell short. Instead of making a commitment of a job, many of the social programs were aimed at addressing the problems caused by chronic joblessness, whether in coal mining country, the cities whose plants have closed, or the low-income parts of cities like Milwaukee.

During the Depression, federal job programs resulted in a series of improvements, new trails, park buildings, etc. that continue to benefit us today. (I particularly like the Grant Park pavilion.) There are a number of needs today, such as replacing lead water lines, which are not addressed because there is no money.

An example of such a plan is one developed by Julie Kerksick, David Riemer, and others involved with Milwaukee’s New Hope project. (Full disclosure: Kerksick and Riemer are friends of mine). Among its provisions would be to offer transitional jobs to all unemployed and underemployed adults able to work. It would also add a number of provisions aimed at making sure the work could support a family, such as an expanded earned income tax credit, raising the minimum wage, and providing child care for workers. It would also get rid of means tested programs that create a disincentive for getting a better-paying job or working more hours.

In many ways this approach would be a return to the philosophy of the New Deal, with its emphasis on work rather than welfare. Senators Tammy Baldwin and Cory Booker have introduced a bill, called the “Stronger Way Plan,” incorporating some of these ideas, in particular a transitional jobs program subsidizing jobs for unemployed people.

In a less polarized time, this plan would appeal to pragmatic Republicans. After all, things like the earned income tax credit were largely a Republican invention. It makes no sense to insist that unemployed people get jobs if there are no jobs.

However at a time when winning elections and ideology trump all other considerations, the plan runs up against several myths. One is the myth of the steadily expanding government. In reality the government has shrunk. As the next chart shows the portion of government employment, at all levels has been on a downward trend since the recession in 1975. It is lower today than at the end of the Reagan administration. 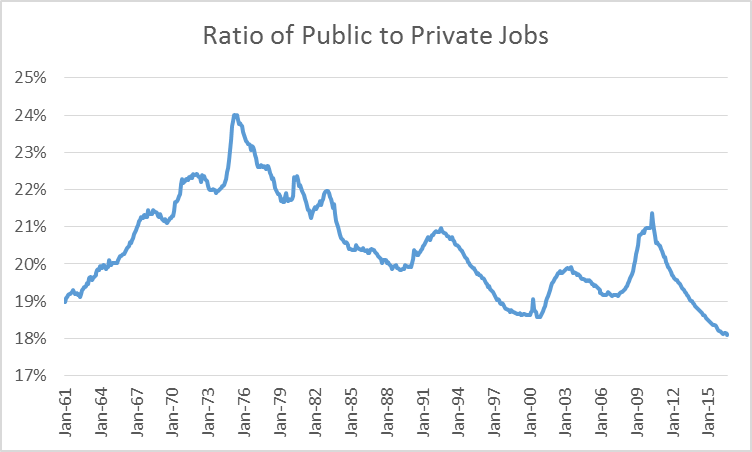 Ratio of Public to Private Jobs

Rather than arguing about whether the white working class is worth wooing, Democrats should concentrate on assuring that there are jobs for everyone, wherever they live, whatever ethnic group they belong to, and whoever they vote for.

5 thoughts on “Data Wonk: Can Trump Voters’ Pessimism Be Overcome?”