The data show his supporters are very pessimistic. How will he meet their needs?

With Donald Trump’s victory, the question arises as to what policies his administration will follow. Given the many contradictions in his proposals, and his apparent lack of interest in policy, any predictions are as likely to be risky as those about the outcome of the election.

What is clear is the remarkable pessimism of the Trump supporters, the people who turned out in numbers that fooled the pollsters. Two polls, one by Pew Research and the other by PPRI and Brookings, taken shortly before the election attempted to understand the Trump and Clinton supporters. Their conclusions were remarkably similar.

The answers to two questions in an August poll from Pew illustrate the Trump pessimism. The first shows how the Trump supporters — those voting for him in the Republican primary — believe America has gone downhill. 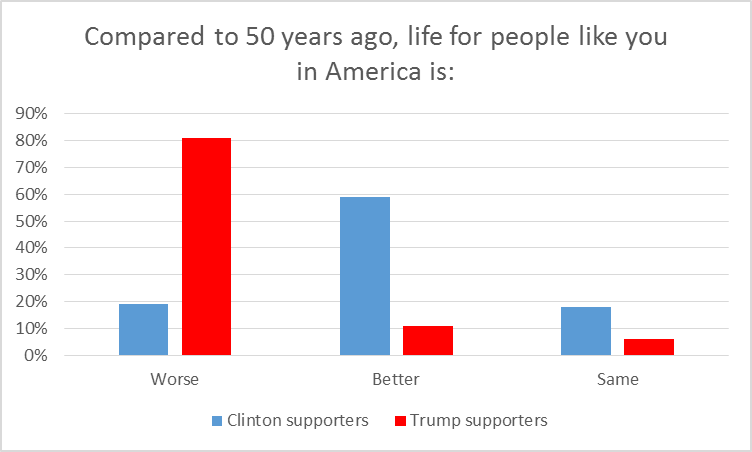 Compared to 50 years ago, life for people like you in America is:

The second illustrates Trump supporters’ pessimism about the future: 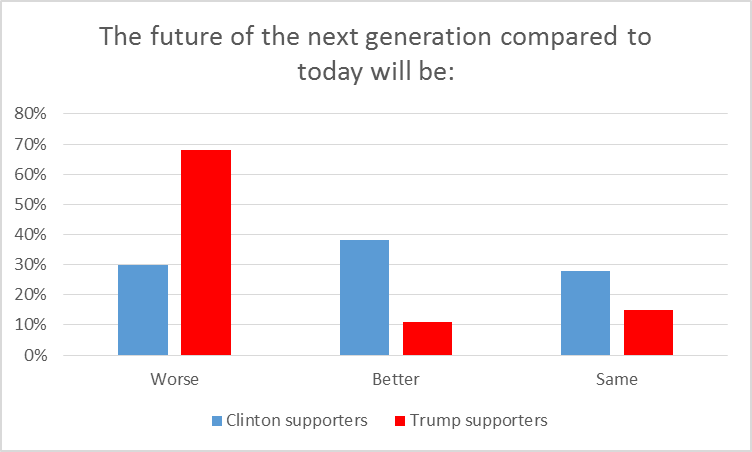 The future of the next generation compared to today will be:

Among the three largest ethnic groups, as the next graph shows, African Americans are the most optimistic Americans, whites are the least and Hispanics fall in the middle. This strikes many people (including Trump himself–with his “What do you have to lose?” message to black voters) as strange because this ranking reverses standard measures of welfare which show whites do best and blacks worst. However, it fits recently-uncovered statistics on worsening death rates in middle-aged working-class whites, primarily due to self-inflicted causes, such as suicide, excessive drinking, and drug abuse. Happiness may depend more on one’s perception of trends than of absolute positions. 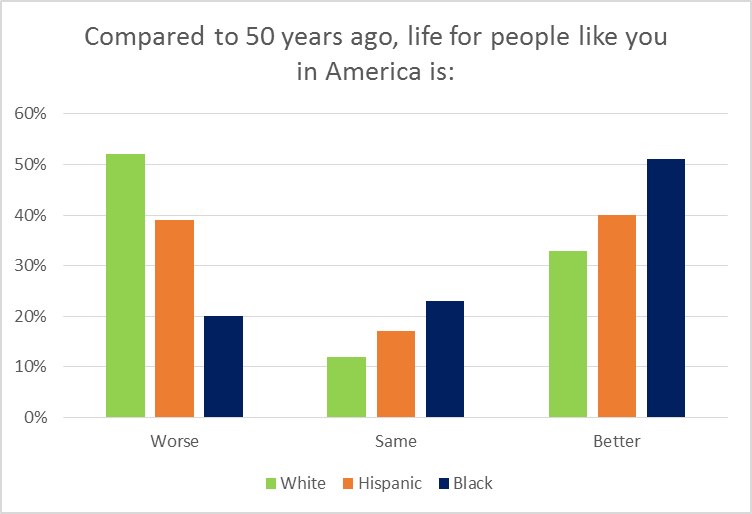 Compared to 50 years ago, life for people like you in America is:

Trump has helped create a remarkable switch in Republican attitudes about free trade. The next chart compares the attitude of Republicans in May 2015, the month before Trump entered the presidential race to their response this August. Trump has completely reversed the previous Republican support for foreign trade agreements: 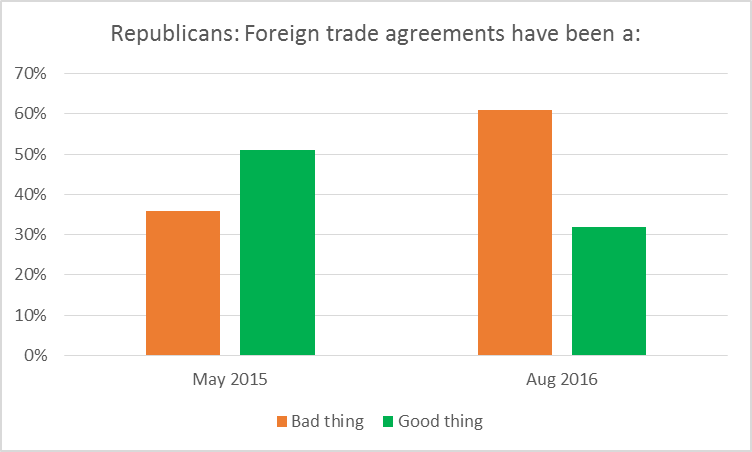 Republicans: Foreign trade agreements have been a:

It is no surprise that Trump supporters do not like the Trans-Pacific partnership. More surprising is that a majority of Clinton supporters continue to support the TPP, disagreeing with Clinton and Bernie Sanders. 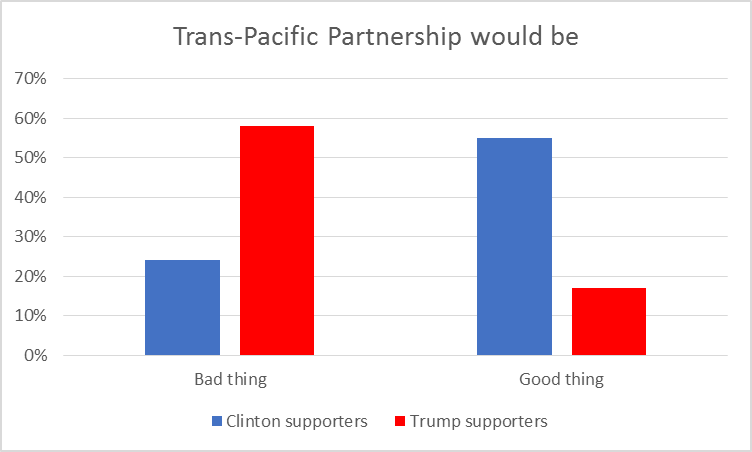 Trans-Pacific Partnership would be: 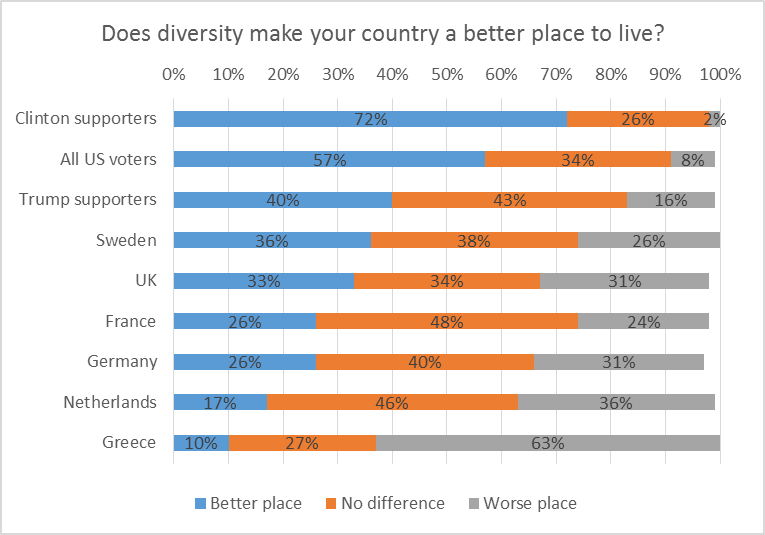 Does diversity make your country a better place to live?

Other results are pretty much what one might expect. Compared to Clinton supporters, Trump supporters are much more concerned about immigration and terrorism and much less about the gap between rich and poor and the condition of the environment.

As soon as the election results were published, Wisconsin’s Paul Ryan claimed that they represented a “mandate.” Because Trump, unlike Clinton, never presented a coherent set of policies, presumably the mandated policies will be supplied by Ryan.

It is hard to argue that a candidate who came in second in the popular vote received a clear mandate for a particular set of policies. Yet Trump tapped into the unhappiness and deep pessimism of people who felt left behind by the “elites.” His mandate, if any, is to address the causes of their pessimism.

When newspapers publish maps of the election results, they show a sea of red surrounding blue islands, the urban areas. For all their challenges, most cities are prospering, particularly on the coasts. Even in the Rustbelt, cities like Milwaukee are making a transition.

Many of the areas choosing Trump have been hard hit by changes in the economy. For instance, a majority of Wisconsin’s less-populated counties continue to lose population. While there are some long-time Republican areas that continue to prosper, such as the counties surrounding Milwaukee, the traditionally Democratic areas that switched to Trump are genuinely hurting.

There are reasons to doubt Trump will be successful in addressing the causes of his supporters’ pessimism. For starters, it’s unclear he understands the problem. Take manufacturing. During the campaign Trump repeatedly claimed that the US has stopped making things. Yet since 1987, the real output (red line) of American manufacturers has almost doubled, while around a third of manufacturing jobs have disappeared. 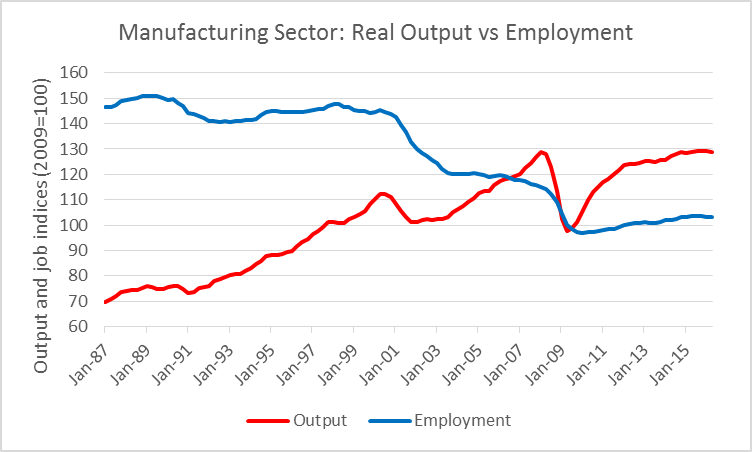 The problem is that US manufacturing has continuously looked for ways to do more, to produce more efficiently. This is how the market is supposed to work.

Trump suggests the whole problem is because countries like China are cheating and seems to proposing the erection of various barriers to trade. This threatens to set off a trade war. More immediately it is very hard to erect a barrier on one import while leaving others alone. An example is the last Bush administration’s attempt to help the American steel industry by placing tariffs on imported steel. This put American users of steel, such as the Wisconsin lawnmower industry, at a competitive disadvantage, because their foreign competitors benefited from lower cost steel.

A trade war with China could hurt American business in other ways. As with the Bush steel tariff, it could raise the costs of materials used by American manufacturers. It could also help shut off the Chinese market for American products and services.

Another group that has been hurting—which Trump has promised to help—are coal miners and the regions dependent on them, including Appalachia and some Western states. As the next chart shows, the number of miners (red line) dropped in half long before there was any talk of a “war on coal” or climate change. Again, the major cause was technology: fewer workers were needed. The growing use of surface mining and less underground mining also played a role.

The recent decline in mining jobs has causes beyond the concern about global warming. These include lower costs of gas resulting from fracking and the continual cost reductions in solar and wind power. China, by far the largest coal user, has been trying to reduce coal burning to fight dangerous air pollution in its cities. 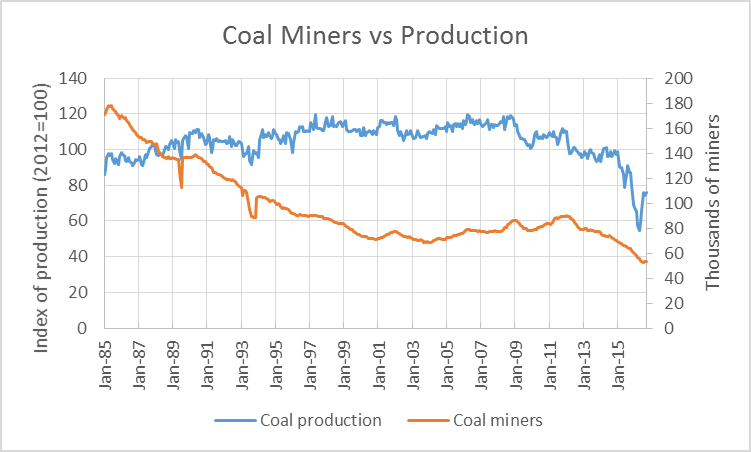 Agriculture is the classic example of an industry in which output has increased while employment has decreased, a process that has been going on for centuries. It is also a major American exporter and potential victim if Trump triggers a trade war. The chart below shows the number of farm workers since 1948, but the decline started much earlier. As with manufacturing, the root cause is technology. Farms have gotten larger to support the increasing investment in equipment. 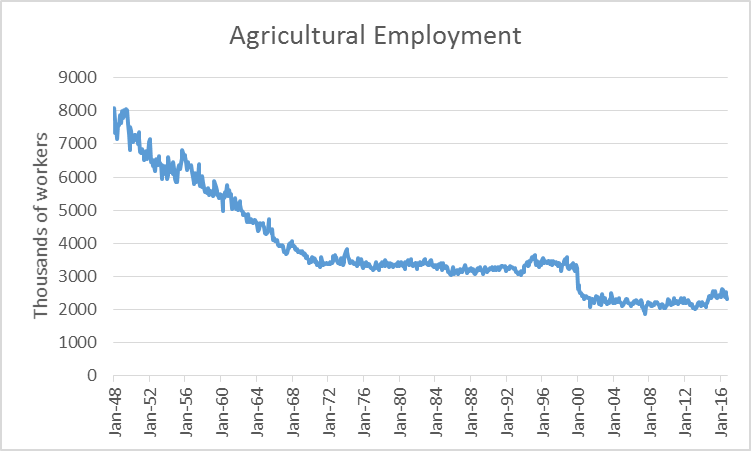 Today, as the next chart shows, farm output has continued to grow, while the number of workers has shrunk to around two million. As a result, rural counties are losing population. Fewer workers means lower business in the towns and the young people move elsewhere. (Note: I have been unable to find any explanation for the huge reported decline in farm employment that occurred from 1999 to 2001. At two million, agricultural employment is now so low it is not given a lot of attention.) 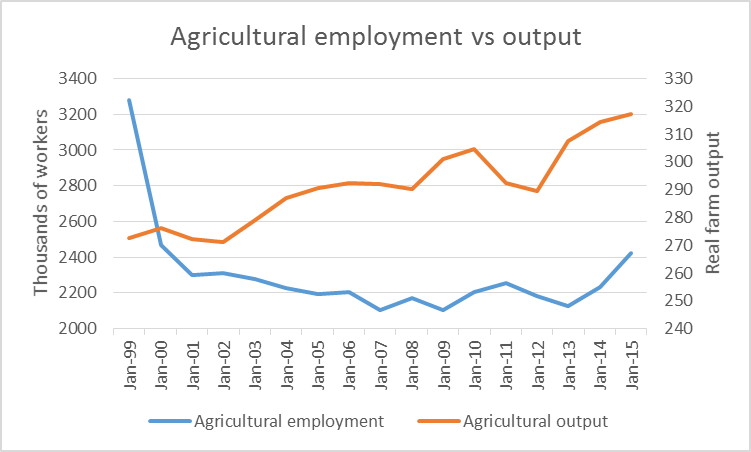 Republicans have long positioned themselves as the “free market” party. When it comes to global trade, Trump has shifted that role to the Democrats.

Free market enthusiasts like to talk about “creative destruction.” The market constantly chews up and renews the economy. In the long run, this process creates more prosperity: more manufactured goods and agricultural products at lower cost, or energy with less environmental cost. But this process has a human cost, particularly in the destruction of existing jobs. Trump’s supporters appear to include a heavy proportion of the victims of the free market.

Whatever his limitations, Trump has shown remarkable skill in reading an audience and saying what they want to hear. This leaves little guidance as to what his priorities will be. Is Paul Ryan right that he will he turn policy over to right-wing ideologues such as himself and Mike Pence? Or will the new president actually try to help the pessimists who formed the core of his support?

Trump has been remarkably secretive about his business career, reflected in his refusal to release his tax returns. Perhaps one reason for his reluctance is that the returns would confirm the impression that he has prospered at the expense of people who invested in his businesses, whether suppliers and contractors on his building projects, students at Trump University, investors in his Atlantic City casinos, or those who bought shares in the Toronto Trump Tower, which recently plunged into receivership.

Will that pattern be repeated in the Trump presidency? Or will he remember the pain of the people who elected him?