In July of this year, I criticized Attorney General Brad Schimel for insisting that Wisconsin was safer because of concealed carry becoming law in 2011.

“Hundreds of thousands of Wisconsinites hold a concealed carry license, making our state a safer place to live, work, and raise a family,” he said then.

I pointed out that his assumption was flawed — the state wasn’t safer under the recent years of concealed carry. FBI data for the years 2011-2014 showed that violent crime and murder went up, and preliminary data from 2015 showed it went up dramatically.

Concealed carry, when it was being debated on in the state legislature, was sold based on the idea that it would prevent crime from happening. If a criminal couldn’t be sure that a law-abiding citizen was carrying a gun or not, surely that criminal would be less likely to try and commit a crime.

In other words, it wasn’t just self-defense that justified concealed carry, but it was also deterrence of crime. Indeed, in signing the bill into law Gov. Scott Walker promised that the state would be safer for it.

Last month the FBI released the updated numbers for crime in the United States for the year 2015. My numbers from July of this year came from the Wisconsin Department of Justice, and were preliminary estimates. These new FBI numbers are considered more reliable, and are better to compare with previous years’ data.

What new information have we found? The new data shows that the estimates examined in my post from July were actually conservative. Violent crime, murder and gun crime trended worse than what I reported back then.

In the years prior to concealed carry getting passed into law, crime in the state was already trending lower year-after-year. From 2008 to 2011 (the law was enacted at the end of that year), the rate of aggravated assaults where a gun was involved in the incident dropped by 72 percent, from 35.8 incidents per 100,000 citizens to 27.4 incidents per 100,000.

Overall, from 2008 to 2015 aggravated assaults that involved a gun went up by 43 percent. All of the rise in that rate during that time period, however, can be attributed to the years after the concealed carry law was passed. 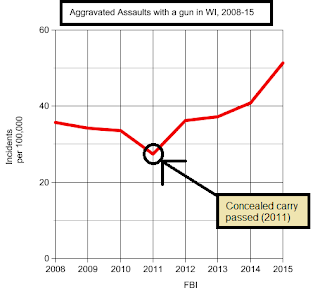 Deflating the “it’s only in Milwaukee” argument

There are some who will see these statistics, scoff at them and say, “It’s only in Milwaukee.” Indeed, crime did go up from 2011 to 2015 in our state’s largest city. But making that statement perpetuates the belief that Milwaukee is somehow “cut off” from the rest of the state. Many across Wisconsin simply choose to ignore Milwaukee, and view it as a hindrance, when it’s just as much a part of the state as any other community. The safety of that city should matter to the rest of the state.

But another problem with the “it’s only Milwaukee” statement is that it’s NOT just Milwaukee. Violent crime across non-metropolitan counties has also gone up. From 2011 to 2015 violent crime in these counties went up by 18.8 percent. Murders went up by 172 percent.

In all, from 2011 to 2015 murders in Milwaukee increased by 69 percent. In communities outside of Milwaukee murders went up by 84 percent.

Following my blog post in July, I was invited to speak on the Joy Cardin show on Wisconsin Public Radio. I reiterated the points I made on my blog at that time:

[Chris] Walker points to 2011, when the concealed carry law was passed. In the three years leading up to 2011, crime was going down, he said. But in the following years, the crime rate starts to go up.

It’d be unfair to blame concealed carry for the rise in gun crimes or violence overall across the state. A variety of factors unrelated to gun ownership could be in play, and a more comprehensive study is necessary than what I have provided above.

But what we can point out is that concealed carry, as a method of deterrence to crime across the state, was an utter failure. Republican lawmakers promised — and still promise to this day — that concealed carry makes the public safer. Yet we are most definitely not safer in the years following its passage.

As a method for public safety, we need to consider options other than concealed carry. Calls from some Republican lawmakers to loosen gun laws even more (around K-12 schools and college campuses in particular) are wrong-headed, and won’t provide safety to the areas they intend to.

Real reform is needed, and the answer can’t just be to arm the public. That reform has failed to keep us safe.