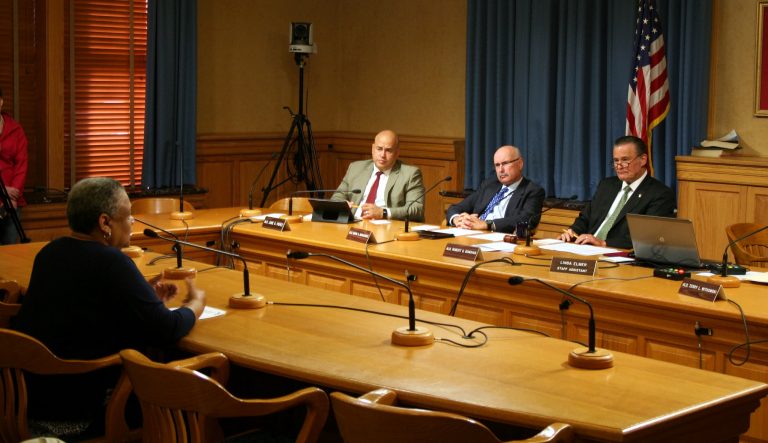 Community organizations from across Milwaukee sent a clear, unified message to the Common Council at a recent Public Safety Committee hearing: more police will not be sufficient to reduce violence and crime in the city.

The packed hearing was called to solicit feedback on the committee’s draft public safety plan, which was released shortly after violent demonstrations ripped through the Sherman Park neighborhood in response to the police shooting of Sylville K. Smith, a 23-year-old black man. The plan recommends adding 280 police officers, 150 sheriff’s deputies and increasing time behind bars for juvenile offenders. Four additional hearings will be held to collect resident feedback.

Ald. Bob Donovan, chair of the committee, defended the plan and its focus on law enforcement. “This is just one in a series of plans that will be coming out of the Common Council,” he said, adding that other plans will focus on jobs and economic development, youth and education, and community engagement.

Many organizations that are a part of the Community Coalition for Quality Policing, including the ACLU of Wisconsin, Milwaukee NAACP, Milwaukee Inner-city Congregations Allied for Hope (MICAH) and the League of United Latin American Citizens (LULAC) raised specific concerns about the tactics and strategies of the Milwaukee Police Department (MPD).

“The answer to the unrest in Milwaukee in August of this year, and to the violence in Milwaukee in general, is not more police,” said Joseph Ellwanger, a former pastor of Cross Lutheran Church representing MICAH. “We need a change in police strategy.” 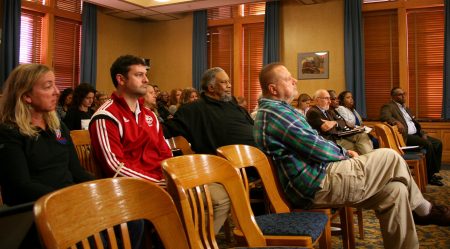 A crowd largely made up of individuals representing community organizations looks on during a Public Safety Committee hearing to solicit feedback on the its draft public safety plan. Photo by Jabril Faraj.

Wisconsin ACLU Executive Director Chris Ahmuty criticized the use of pretextual stops — traffic stops for minor infractions, meant to deter more serious crime — saying the practice undermines the good things that are happening in terms of community engagement, on the part of police.

According to MPD standard operating procedure as of August 2014, MPD uses the stops to “make contact with citizens, target commonly stolen vehicles and focusing our efforts in those neighborhoods most afflicted by crime victimization. The preferred outcome of our trafﬁc stops in which no crime has been interrupted or discovered is a warning.”

A 2011 Journal-Sentinel analysis of traffic stops made by MPD showed that black drivers were seven times more likely than white drivers to be pulled over by police; Hispanics were pulled over nearly five times as often as white motorists. As many as 200,000 stops occur yearly.

“This city’s already fearful of police officers, and a lot of the time these officers are saying things to people that are making people even more fearful,” said Malcolm Hunt, a bishop at Least of These International Ministries who was a Milwaukee police officer for 25 years and works with families affected by homicide. He said residents don’t talk to officers because of a lack of sensitivity and confidentiality on the part of police.

The draft plan cites a recent increase in the number of violent crimes, including a 70 percent increase in homicides from 2014 to 2015 and a 68 percent increase in auto thefts since 2013, as a reason for the recommendations. The Milwaukee Police Department’s 2016 operating cost of $277 million is 45 percent of the city’s total $615 million budget.

A 2016 analysis by researchers from the University of Cincinnati that looked at 62 studies and 229 findings of police force size and crime between 1971 and 2013 found that “there is no good reason to suspect that marginally more police reduce crime at a meaningful level.” The paper concludes that “changing policing strategy is likely to have a greater impact on crime than adding more police.”

Community Coalition for Quality Policing members cited Cincinnati as an example of a community that is approaching policing in the right way. After riots in 2001 that resulted from 15 police killings of black men in a five-year period, police agreed to be more transparent, better discipline officers, establish a Citizen Complaint Authority, adopt new use-of-force policies and establish a mental health response team.

The new strategy called for fewer arrests, instead focusing on solving the problems that cause people to commit crimes. Jeanne Geraci, executive director of the Benedict Center, suggested MPD implement a street-level pre-booking diversion program that would reduce arrests and get people help.

In Cincinnati, between 1999 and 2014, police use-of-force incidents dropped 69 percent; citizen complaints declined 42 percent; citizen injuries were down by more than half. Violent crimes declined by almost 50 percent and misdemeanor arrests dropped from 41,708 in 2000 to 17,913 in 2014.

“That’s significant; that’s impactful. You talk about data-driven results. That’s something that I think that we could benefit from,” said Milwaukee NAACP President Fred Royal.

Gauerke added that citizen complaints decreased 38 percent between 2013 and 2015; use-of-force incidents were down 25 percent over the same period. The number of citizen complaints in 2014 was slightly above 2001 levels, due to a spike in complaints between 2007 and 2012, according to the City of Milwaukee’s most recent budget.

“There are some things that are in place that they are trying to do,” said Brenda Hart-Richardson, an Amani resident who has been through abbreviated police training. “But, when they’re on the street, are they practicing what they’re being taught?”

Octavia Parker, also an Amani resident, suggested more regular contact with officers might help to decrease fear, both for old and young residents. “We had beat officers that walked the beat,” she said. “It wasn’t about the baseball cards (that officers handed out to children) — it was about the relationship that they had with the neighbors and the children. I think we need to get back to that.”

The plan cites “multigenerational poverty, joblessness, breakdown of the family, widespread drug abuse, a challenged education system and the lingering effects of the housing foreclosure crisis” as the root causes of Milwaukee’s situation. However, it provides no recommendations to address these issues.

“Police can’t do it all, and shouldn’t be expected to do it all,” said Elysse Chay Wageman, chair of the public policy work group for Beyond the Bell.

“The key to preventing darkness and destruction in the City of Milwaukee is to attack the conditions of misery and want,” said Mose Fuller, pastor of St. Timothy Community Baptist Church, 3701 N. Teutonia Ave.

Fuller said there needs to be investment in economic opportunity across the city, not just in particular neighborhoods. Other individuals who testified pointed to creating living-wage jobs, providing effective drug treatment and more accessible mental health services, investment in youth programming and changing the narrative around young people. Some said real conversations and community building are necessary.

“We spend way too much time on rituals and politics than on problem-solving, when it’s obvious how hungry everybody is for the solutions,” said Tammy Rivera, executive director of the Southside Organizing Committee. She added that city leaders must make difficult decisions and sacrifices now.

Jay Holmes, who lives in Sherman Park, criticized the committee, saying it should have asked for resident feedback before releasing the plan. He said not enough has been done to provide opportunity and address the conditions people in Milwaukee face.