By Allison Steines, Milwaukee Neighborhood News Service - Sep 14th, 2016 11:13 am
Get a daily rundown of the top stories on Urban Milwaukee 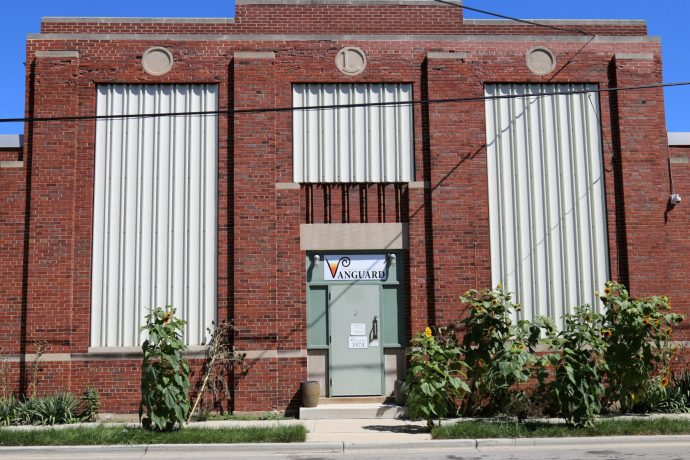 Sunflowers adorn the entranceway of Vanguard Sculpture Services, an Art Deco-style building. The inside is spacious and full of interesting nooks and crannies, studio spaces and a gallery to exhibit local artwork. Light seeps in the windows and spills over buckets of wax, limestone sculptures and bronze casts.

Vanguard Sculpture Services is one of 150 sites throughout the city featured in Doors Open, an annual event that allows the public to explore interesting locations throughout the city. The two-day event, to be held Saturday, Sept. 17, and Sunday, Sept. 18, showcases museums, churches, theatres, breweries, art studios and community centers, which will open their doors to visitors, free of charge.

Two of this year’s spotlight neighborhoods, Clarke Square and Sherman Park, are in Milwaukee’s central city; the third is West Allis. Many locations include guided tours, but others allow visitors to explore and observe at their leisure. 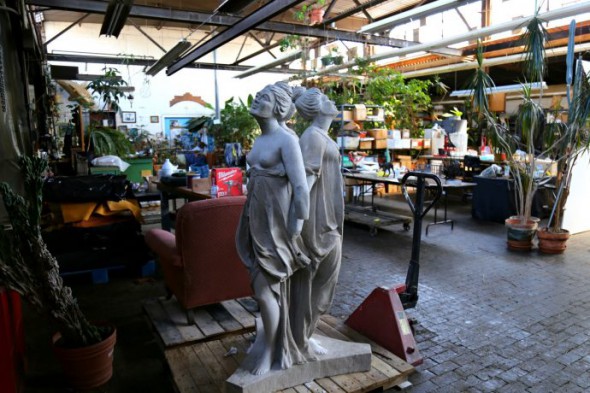 Vanguard works to restore a 100-year-old limestone sculpture called “Three Graces” from Lake Geneva, Wisconsin. The Sculpture was vandalized and the hands were broken off. Photo by Allison Steines.

Vanguard Sculpture Services has participated in Doors Open Milwaukee for the past three years and usually brings in about 200 people, according to Beth Sahagian, one of the two owners. Sahagian and co-owner Michael Nolte will take visitors on guided tours to show them their process.

“We work with artists from all over the country,” said Sahagian. “Mainly what we do is … cast their art into bronze. We reproduce it. Often times the piece is like a clay, or a piece of wood, or a base, or a piece of hardware,” she added. “We have to mold that, make waxes, and then reproduce it using the lost wax process, which is one of the oldest processes of casting.”

Vanguard Sculpture Services will be open from 10 a.m. to 5 p.m. on Saturday and Sunday during the Doors Open weekend. 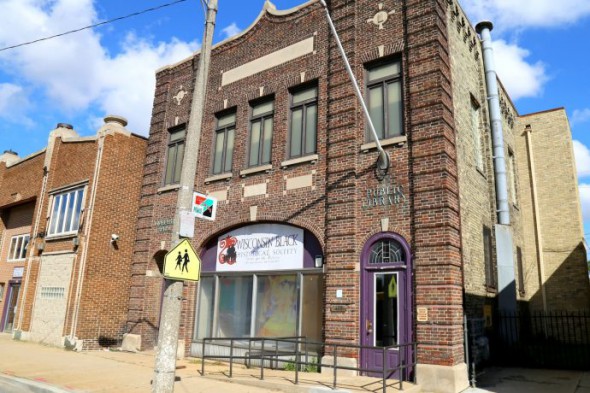 The Wisconsin Black Historical Society serves as a museum and resource for people interested in African-American history. Photo by Allison Steines.

The historical site is a place for people to gain knowledge and awareness of African-American history in Wisconsin. The museum’s collection ranges from life-size displays to tiny intricate artifacts.

Special archives will be on display during the Doors Open event. One archive includes a silver crown, white gloves and a photograph belonging to the late Mattiebelle Woods, an African-American woman who wrote for the Milwaukee Courier from the 1950s to 2005.

“Part of her legacy was that she lived until she was 103,” said Clayborn Benson, founder of the Wisconsin Black Historical Society.

The other archive features James Cameron, founder of the U.S. Holocaust Memorial Museum and author of “A Time of Terror.” Cameron’s first copy of the manuscript sits on the table next to his photograph.

Visitors will also be able to view a 30-minute PowerPoint presentation and walk through the museum from 10 a.m. to 3 p.m. on Saturday. 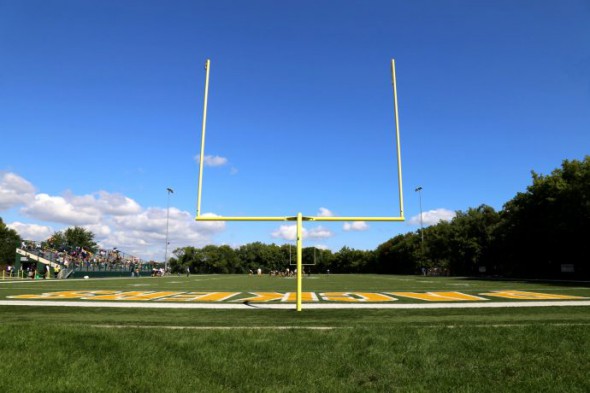 What used to be the Green Bay Packers’ practice field in the 1990s and 2000s now serves as a space for the Journey House Youth Football League and Cheerleading Program. The field opened in 2013 after being donated by the Packers.

On average, Journey House hosts seven games a week. The crowd total on a Saturday alone can reach 4,000.

“It’s a nice field for the kids to play on. Keeps the kids out of trouble, keeps ’em busy,” said community member John Mattox.

“The boys are 6, 7 and 8,” added Gary Gilbert, watching a game on a recent Saturday. “The blue and yellow team is Michigan and the all-yellow team is Green Bay Packers.”

More than 500 youths from underserved neighborhoods in the inner city are involved in the league, which is a platform to teach young people life skills. Charles Brown, coach and youth development coordinator at Journey House, makes it clear that the emphasis is on education, nutrition, character development and parental involvement.

“It has changed the neighborhood,” said Brown. “It really gives our kids an experience of winning, not just on the field but off the field too.”

Journey House Packers Field is located behind the Mitchell Park Domes; it will be open Saturday from 10 a.m. to 5 p.m. and Sunday from 11 a.m. to 3 p.m. 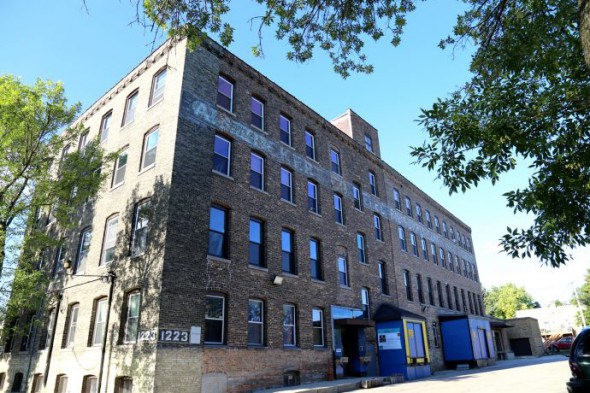 The Factory’s sturdy structure was built in 1894 as a place to produce straw hats. The building now functions as a space for 30-40 artists. Photo by Allison Steines.

The Factory’s sturdy structure was originally built in 1894 as a place to produce straw hats.

“It means a lot to have a space where we can do whatever we want to do. There is a lot of freedom here,” said artist Janelle Gramling. “The space is affordable. There is nothing precious or fancy about the floors or the walls or the windows. You can just kind of make whatever work. And that’s what’s cool about this place.”

During the Doors Open weekend, the building will be open Saturday from 10 a.m. to 5 p.m. All tours will be self-guided. 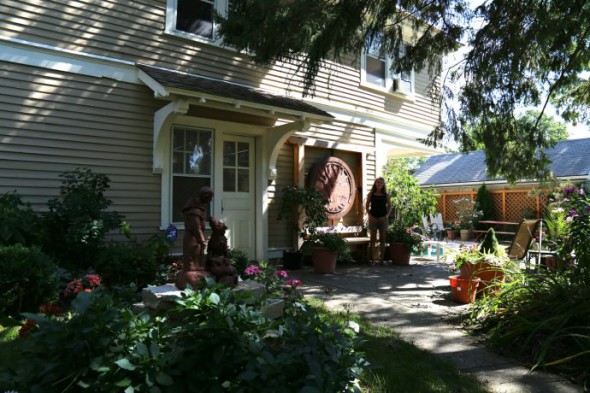 Lori Gramling stands outside Tree of Life Earthworks, which was renovated from an 1889 carriage house. Photo by Allison Steines.

Nestled behind the home of Lori Gramling sits Tree of Life Earthworks, in a recently renovated 1889 carriage house. Earthworks began about six years ago and functions as a classroom, art gallery and studio space.

The building has both an upper and lower level. The lower level doubles as an art gallery and classroom. The gallery exhibits a holiday show and a spring show, presenting works by Lori Gramling, Matthew Gramling, Janelle Gramling, Melissa Muller and Cathy Elsinger.

The upper level is a studio space for Lori Gramling to work on her own art.

Visitors are invited to participate in building three walls. “As a group we decided to promote an image of creating three walls; a wall of courage against fear, a wall of love against hate, and a wall of hope against cynicism and hopelessness,” said Lori Gramling.

The three walls idea was created by a group of women called the Sisters Circle, a group of therapists and psychologists who use their creative visions and artistic skills to instill positivity into others. During Doors Open, different groups will participate by inscribing their thoughts about courage, love and hope into clay walls.