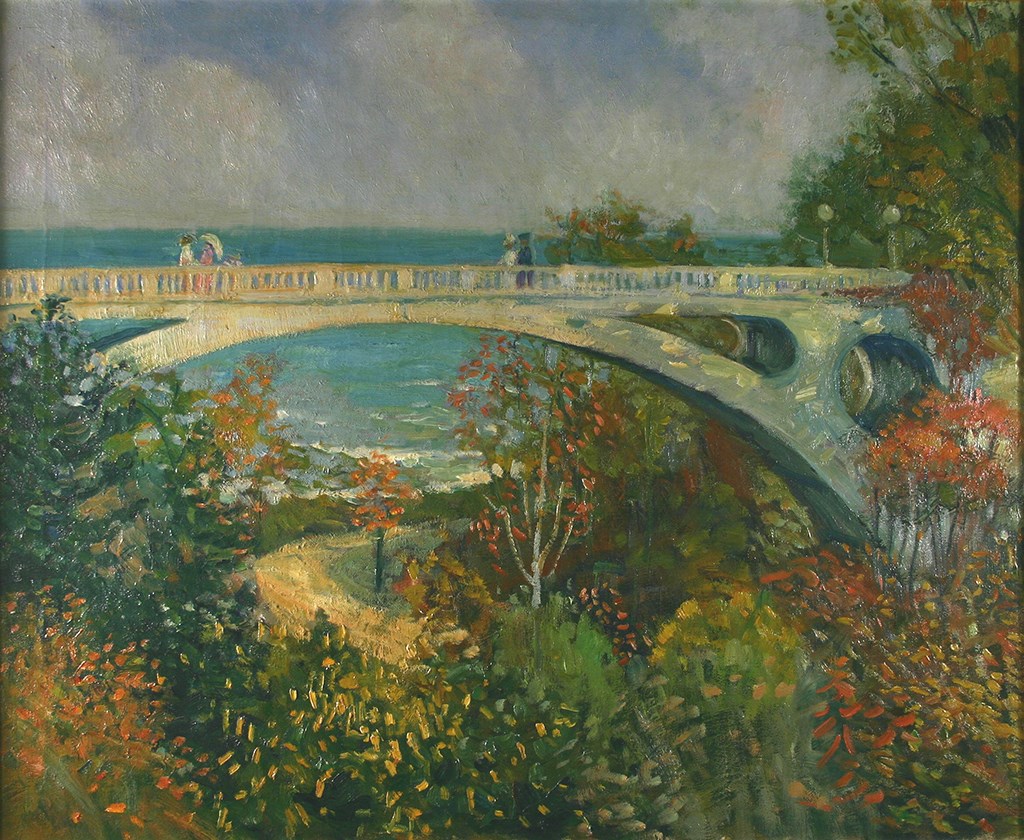 The entire Milwaukee County Park System is a historic treasure, not just some of its 158 parks and 11 parkways. Local materials and handcrafted masonry are among the system’s hallmarks. Many county parks were built or improved by the Works Progress Administration during the 1930s and 1940s, after Charles Whitnall master planned the system in 1923.

But their maintenance can be a challenge. How to keep the parks’ “character-defining” features was the focus of recent research and planning. A thorough 2012-13 study included a Milwaukee County Parkway Inventory Report. A second report, The Historic Properties Management Plan for county parks, is a blueprint for preserving elements of the system, which county, state and federal officials agreed “was eligible for the National Register.”

A required federal review has found that Milwaukee County and Wisconsin Department of Transportation had replaced five park bridges within county parkways in ways that created an “adverse effect on the System.” In response a collaborative agreement among county, state and federal agencies was developed “to both mitigate, in part, for those losses and chart a different course for the future.” The management plan addressed how to preserve the integrity of park buildings, roads, trails, small-scale structures, and landscape and water features. Architects, engineers and historians at Mead & Hunt prepared both reports. Additionally, the county and Wisconsin Department of Transportation successfully nominated five parkways to the National register of Historic Spaces: Honey Creek, Kinnickinnic River, Milwaukee River, Oak Creek and Root River.

The management plan cites the replacement of stone-veneer bridges–along Honey Creek Parkway and in Jackson Park along the Kinnickinnic River Parkway–that did retain the system’s historic character when they were constructed respectively in 2007 and 2009.

Preservation issues are part of ongoing debate about Lake Park’s neglected Ravine Road Footbridge. County officials and citizens are contemplating whether to rehabilitate or replace it–either with a replica or a contemporary design. Citizens favor either a long-lasting rehabilitation plan or a reproduction based on original drawings. There’s little public support for two proposed modern bridge designs. The advisory bridge work group meets August 23 from 5:30 to 7 p.m. in Lake Park Pavilion’s Marcia Coles Community Room. It will to try to reach consensus about one plan to recommend. The public may observe, in keeping with open meetings law.

The National Association for Olmsted Parks has urged the bridge work group to support the bridge’s restoration. NAOP is the “only national organization solely dedicated to preserving the Olmsted legacy.” NAOP board co-chairs wrote in a June 2 letter: “Destruction of historic fabric must be a last resort, not the consequence of expediency or predisposition of those empowered to make this irrevocable decision on behalf of Milwaukee’s citizens.”

Charles Birnbaum, an expert on historic landscapes, told Urban Milwaukee that the Milwaukee community’s clear preferences indicate that residents “value maintaining the visual appearance of Lake Park’s historic structures.” Founder and CEO of The Cultural Landscape Foundation, Birnbaum authored the National Park Service’s Guidelines for the Treatment of Cultural Landscapes in 1996. Those guidelines interpret the Secretary of the Interior’s Standards for the Treatment of Historic Properties, which are “common sense historic preservation principles in non-technical language.” They promote “best practices that will help to protect our nation’s irreplaceable cultural resources.”

The standards and guidelines present four acceptable treatments–preservation, rehabilitation, restoration and reconstruction. Birnbaum said, “putting aside cost, they all call for identifying, retaining and preserving as much extant historical material as possible.” There’s no one single answer for what’s best in every situation and “a resource’s condition and historical significance, costs, and expected service life are all factors in meeting preservation goals,” said Birnbaum. The County Park’s historic-properties plan is based on those guiding principles.

The Value of Authenticity

The Ravine Road Footbridge is one of the park system’s historic treasures. It was designed in 1905-06 by renowned Milwaukee architects George Bowman Ferry and Alfred C. Clas. It’s noted for its elegant neoclassical arch and circular-and teardrop-shaped cutouts—a very early example of modernism. It was one of the first bridges using the “Kahn system” of reinforced concrete.

The “modern design and early use of concrete show that Milwaukee’s park planners embraced the newest engineering of the period,” says Dan Marriott. A member of the Board of Trustees for the National Association for Olmsted Parks, Marriott is a Washington, D.C.-based landscape architect and well-known author specializing in historic roads. Marriott considers this bridge “a testament to Milwaukee’s forward approach to parks, innovation and technology at the start of the twentieth century.”

“An authentic resource–the real thing–is always more valued than a reconstruction,” says Marriott. Nonetheless, “reconstruction sometimes makes sense after starting with preservation as a goal and carefully assessing all relevant factors.” He stresses that decision making should focus primarily on historic context, materials and technology (for example, avoiding original materials or treatments that are no longer ecologically responsible). “Cost may influence a chosen treatment, but should never be the sole determinant when considering a structure of the caliber and significance of this Lake Park bridge,” Marriott says.

Both current and potential value of historic structures is relevant, says Marriott. “Years down the road, a bridge’s innovative engineering could offer useful insights for evolving technologies. If it’s replaced, that information is gone.” Marriott notes that an original structure, even when rehabilitated, is a “touchstone” with the past. “You know you’re walking across a hundred-some-year-old bridge. A replica does not have that same tangible link to a community’s past.”

The Making of an Icon

The Ravine Road Footbridge has often been depicted in postcards, photographs and works of art. One striking image (shown above) is a painting by Wisconsin artist George Raab in the Museum of Wisconsin Art (MOWA). Graeme Reid, MOWA’s director of collections and exhibitions, believes it was created “in the 19-teens.” In Raab’s Impressionistic scene, the bridge dramatically frames a distant view of Lake Michigan—before trees matured and lakefront land was expanded.

Reid views the bridge itself as a work of art for “the beauty of its form and function.” He calls it “an iconic element within Lake Park, which is the crown jewel of Milwaukee’s park system.” For those reasons, he asks, “Why not fix up the original if you can?” In the art world, “even a really, really good copy is never as valuable as an original,” says Reid.

The Path to Reconstruction

A potential longer service life is cited as one advantage of bridge replacement rather than rehabilitation. New bridges are expected to last at least 75 years. A Ravine Road Bridge rehabilitation plan following the Secretary of Interior’s Standards, by Olson-Nesvold Engineers, offers an estimated service life of 40 to 50 years.

Proposals to remove and reconstruct an “irreplaceable cultural resource” on the National Register must present a convincing rationale. The state historic preservation office has told county officials they “must demonstrate that the bridge cannot be feasibly repaired.” Milwaukee County’s management plan also states that “Rehabilitation should always be considered as the preferred treatment for a historic bridge.”

Because the bridge and Lake Park are within a local historic district, county officials would need to gain approval from Milwaukee’s Historic Preservation Commission for demolition and a replacement design. Additionally, all requests for federal funding trigger a rigorous review under Section 106 of the Historic Preservation Act of 1966. Since the county’s parks capital budget is minimal and deferred needs are great, federal grants could help.

Scrutiny of plans for historic properties is designed to “preserve and protect our national heritage,” according to NPS guidelines. Preservation officials are charged with advocating for the public’s interest and facilitating citizen input.

Prior to federal preservation law, the fate of historic resources was subject to shifting tastes. Public opinion often did not support saving venerable structures that seemed to have run their course. Marriott notes that even restoration of landmarks such as Mount Vernon and Independence Hall faced uphill battles. Many iconic railroad depots, including Milwaukee’s, were razed when modernism, not history, was revered. Many consider the 1968 demolition of the Chicago and North Western lakefront landmark a major civic loss.

Lake Park’s stewards have managed to preserve character-defining elements, including its architecturally significant bridges. Nonetheless, consensus about a preferred treatment for the Ravine Road bridge has not been reached among park friends and neighbors. The Historic Water Tower Neighborhood favors “either repairing the current bridge or replacing it with a new reinforced concrete arch bridge that matches the dimensions and aesthetic and architectural features of the current bridge.” Preserve Our Parks, a countywide parks watchdog group, has endorsed only long-term restoration/rehabilitation of the bridge. Neither Lake Park Friends nor the Friends of the North Point Lighthouse (a Lake Park landmark), have taken a public position.

Milwaukee is one of a handful of cities with at least three parks (Washington, Riverside and Lake parks) designed by Olmsted, father of American landscape architecture. This elite league of cities also includes New York City, Boston, Buffalo, Louisville and Seattle. Birnbaum vouches that those other cities have all preserved the authentic character of every bridge within their Olmsted parks. Birnbaum says it’s not uncommon for preservation projects to take time to sort out.

Four Approaches to the Treatment of Historic Properties

“Preservation focuses on the maintenance and repair of existing historic materials and retention of a property’s form as it has evolved over time.

Rehabilitation acknowledges the need to alter or add to a historic property to meet continuing or changing uses while retaining the property’s historic character.

Restoration depicts a property at a particular period of time in its history, while removing evidence of other periods.

Reconstruction re-creates vanished or non-surviving portions of a property for interpretive purposes.”

From National Parks Service, Department of the Interior

One thought on “County Faces Issues When Replacing Bridges”