Can Lake Park Bridge Be Saved?

Can the 110-year-old concrete footbridge in Lake Park be saved? A new report by Steve Olson of Olson & Nesvold Engineers, Inc. in Bloomfield, Minnesota, suggests this may be practical for the bridge that has long spanned Ravine Road, which connects the lakefront and Lake Park’s bluff areas.

Olson’s proposal will be one of several outlined at a public information meeting on Tuesday, July 19 from 5 to 7 p.m. at the Marcia Coles Community Room in the Lake Park Pavilion. Officials from Milwaukee County and GRAEF-USA will host the event. The public will be invited to ask questions and comment.

Current options for the bridge include two restoration plans, including Olson’s, full historic replacement, three modern replacement options, and removal without replacement. The current price tag for the options could range from as low as $270,000 to $2.6 million. But state standards for historic preservation could push the county toward a solution that restores rather than replaces the bridge.

The Ravine Road Arch Bridge was designed in 1905 by renowned Milwaukee architect Alfred C. Clas, of Ferry & Clas, as part of a trio of Lake Park neoclassical structures including the adjacent park pavilion and curvilinear “Grand Staircase” connecting to the lakefront. Other Ferry & Clas structures in Milwaukee include the downtown public library and Pabst Mansion. The Ravine Road bridge, one of the first in the state made of concrete, features distinctive circular and tear-drop-shaped cut-outs that are considered early examples of modernism. According to a 1986 Wisconsin Department of Transportation report, it’s also possibly the first rib-arch bridge to use the Khan System of reinforced concrete. Patented around 1903, the Khan System later became the industry standard in structural engineering.

Lake Park was placed on the National Register of Historic Places in 1992 and this bridge is one of five “contributing resources” in that listing. Frederick Law Olmsted, designer of New York’s Central Park, created master plans for Lake Park between 1892 and 1895. After his retirement, his sons managed the Olmsted firm and supervised Lake Park’s gradual development.

Olson’s report said “there is a reasonable rehabilitation option with a service life of 40-50 years.” Deteriorated portions of the bridge would be replaced while retaining its architectural integrity. The plan’s cost estimates are still being prepared, according to county administrator Karl Stave, who is serving as project director. Middleton Construction Consulting is independently estimating all bridge options.

A prior study by GRAEF proposed a restoration plan that would only extend the bridge’s life by 15 to 25 years, with an estimated cost of $1.8 million.

Olson worked for the Minnesota Department of Transportation for 20 years before starting his company, which has since overseen restoration of numerous historic bridges including some with concrete arches. His firm’s report proposes that “a new structural steel framework (including steel arch ribs) could be constructed just inside of the existing arch ribs. The steel arch ribs would be galvanized to provide some passive cathodic protection to the Kahn bars in the existing arch ribs.” A support plate would also be installed to “function much as a lintel does in masonry construction. The steel framework could be designed to carry all the loads between the abutments or some smaller fraction.” It would result in a reduced load demand for the existing arch ribs.

Both restoration plans would fully replace the bridge’s deck and include other repairs. Deck designs with open rails, as used in the original design, are being considered.

Olson’s plan notes that it would comply with national standards for preservation, including guidelines for restoring historic concrete structures. Olson concurred with the expected service life of GRAEF’s original rehabilitation plan and other aspects of GRAEF’s study. 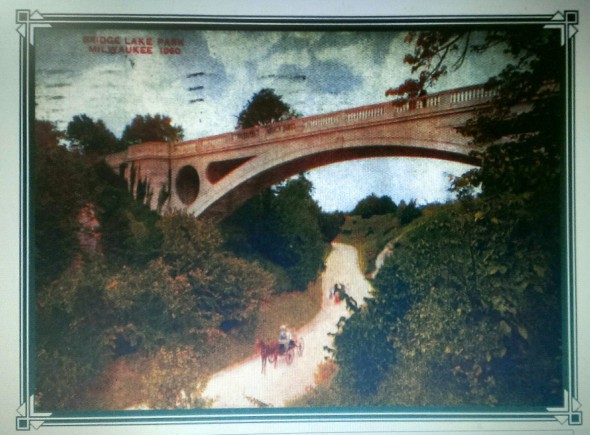 Beside the Olson and GRAEF plans for a restored bridge, the other options include:

-Fully replacing the existing bridge with a faithful replica, at an estimated cost of $2.6 million;

-A replacement bridge with a contemporary prefabricated single-span arch at an estimated price tag of $1.6 million;

-Simply removing the bridge without replacement, costing an estimated $270,000 for demolition plus costs for “restoration, design (bidding document preparation) and construction administration costs,” according to Stave. He also told Urban Milwaukee that “the estimates, even though refined from the earlier in-depth structural review estimates, are still very preliminary.”

The State Historic Preservation Office monitors structures listed on the National Register of Historic Places, a division of the National Parks Service. Chip Brown, the state preservation officer overseeing the bridge project, wrote in a memo dated June 16, 2016, that the county “must demonstrate that the bridge cannot be feasibly repaired” in order to consider a replacement bridge. In that case, Brown wrote that a design “must use original plans for construction” and follow the “Secretary of Interior’s Standards for Reconstruction.” He added that a “new construction design is not appropriate and will result in an adverse effect to the historic parkway property.” If the bridge can be rehabilitated, Brown noted the project must follow the Secretary of Interior’s Standards for Rehabilitation.

Funding is another key issue. Recently elected County Supervisor Sheldon Wasserman, whose district includes Lake Park, has told fellow members of the Ravine Road Bridge Work Group that he doubts the county board would allocate the full cost of either restoring or replacing the bridge, considering the countywide backlog of possible projects. County officials estimate the cost of deferred parks maintenance projects between $300 million and $500 million. The 2016 capital budget for all 156 parks is $6 million and no significant increase is expected next year.

Bridges and other infrastructure projects are often built and restored with federal dollars. The primary funding option for a footbridge that is not part of a vehicular roadway would be the Transportation Alternatives Program (TAP) administered by the Wisconsin Department of Transportation. One TAP grant category is for “preservation and rehabilitation of historic transportation facilities,” including bridges. TAP projects are also ranked based on whether they provide pedestrian and biking access to either a commercial district or an educational institution. This bridge qualifies on all counts, providing pedestrian and biking access and connecting to the East North Avenue business district and the UW-Milwaukee campus.

TAP grants provide up to 80 percent of project costs. The next application deadline is January 2018. Milwaukee County has received federal grants under comparable programs to restore other Lake Park bridges, including the Lion Bridges, completed in 2011. The county has also recently received federal grants to build multimodal trails. No major potential funding sources have been identified for a replacement bridge.

Since Lake Park is also part of a city-designated historic district, a demolition order or plan for a replacement structure would also need to be reviewed by the Historic Preservation Commission and approved by the Common Council. The city requires a “certificate of appropriateness” for changes made to the exterior appearance of historically designated structures.

The Ravine Road Bridge Work Group will consider public input and other factors before recommending an approach to the county board later this summer. The 20-member committee includes county and Graef staff, subcontractors, representatives from park friends and neighborhood organizations, and representatives from city and state preservation offices.

The bridge and Ravine Road were both closed in December 2014 after deterioration was detected. While pedestrian access to the bridge has since been restored, Ravine Road below remains closed for now.

The Marcia Coles Community Room is beneath Lake Park Bistro in the Lake Park Pavilion, which is located at the juncture of Lake Drive and Newberry Boulevard. Parking near the pavilion is available.