See inside the new Riverwest brewery. 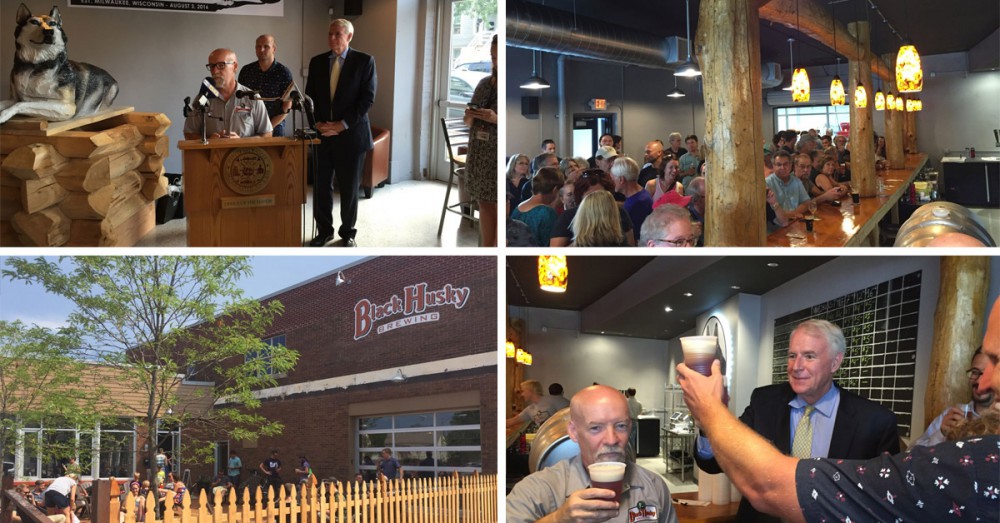 The summer of beer continues in Milwaukee. The city has already seen the openings of Urban Harvest Brewing Co., Good City Brewing and MobCraft Beer, and Wednesday Black Husky Brewing joined the party. Led by the husband and wife team of Tim and Toni Eichinger and their husky dog Howler, the new brewery is bringing a bit of the northwoods to Riverwest.

The Eichingers, who began brewing beer in 2010, relocated to Milwaukee with their brewery from Pembine. They’ll find many more customers in Milwaukee, with their new neighborhood alone boasting far more than the 1,036 residents in the town of Pembine near the Wisconsin-Michigan border.

One of those neighbors is area alderman Nik Kovac who lives “across the street and down the block.” Kovac was on hand not just to give a speech and drink free beer, but to present the Eichingers with a ceremonial branch from a spruce tree in his yard. The alderman was pleased to announce to the crowd that he was doing something about the trees in his back yard, which Kovac noted were derided by Urban Milwaukee House Confidential columnist Michael Horne in a January column (see: “Ald Kovac’s ‘Adult’ Home is Very Modest“). True to the brewery’s northwoods roots, their Sproos beer is made with real spruce (and is the brewery’s best seller).

During his remarks at the ceremonial tapping, Tom Barrett turned a somber anniversary into a humorous moment when he said “as you know, seven years ago I ended my boxing career in West Allis.” In August of 2009 Barrett intervened in a domestic dispute outside the Wisconsin State Fair and was repeatedly struck with a pipe. Barrett noted that two most important jobs for the Milwaukee mayor were to “shake hands and hold a beer,” and he was pleased to report he could still do both. Never one to pass up a bit of neighborhood humor in his speeches, Barrett noted “you may not realize it, but people in Riverwest like to drink beer, especially local beer.” Shortly thereafter the mayor was at the ceremonial keg carrying out the job the people of Milwaukee elected him to do, handing out free beer.

Long-time Riverwesters will remember the building at 909 E. Locust St. as the home of Manyo Motors. Kovac was pleased to report that Manyo has not closed, but relocated to 4035 N. Green Bay Ave. and offers free shuttle service for Riverwest customers. Black Husky is at least the third Milwaukee brewery to open in a space originally designed for motor vehicles, with Good City Brewing and Brenner Brewing also finding the high-ceilings and large open areas as desirable for brewing as it for motor vehicles. 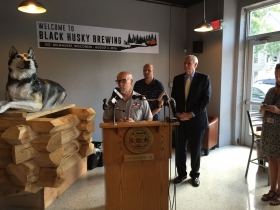 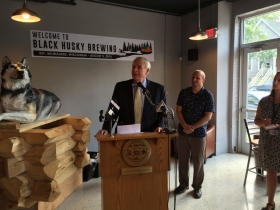 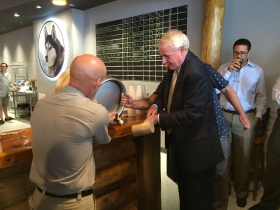 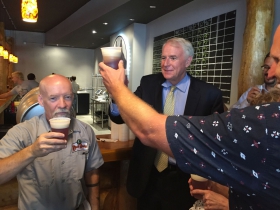 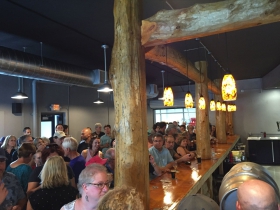 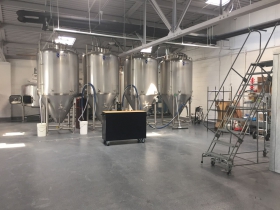 Milwaukee is not foreign territory to the Eichinger’s. The couple lived in West Allis until moving to Pembine in 1999, building a log home by hand. After the brewery got rolling in 2010, they found that approximately 80 percent of the beer they sold was shipped to Milwaukee. Being that Black Husky self-distributes, the Eichingers frequently found themselves making trips back to Milwaukee to deliver beer to bars, restaurants and liquor stores. There was also another draw in Milwaukee, their son and grandson in Whitefish Bay.

The draw to Milwaukee eventually became overwhelming and the couple took the plunge. The new brewery amounts to a $1.2 million investment, including the cost to purchase the building and purchase and assemble the 10-barrel system.

The Black Husky story is unique among the brewery openings because of the role the Milwaukee 7 organization played. Long a name associated with attracting large manufacturing firms to the seven-county region, Black Husky has to be among the smaller relocations the economic strategy group has worked on. Yet Tim Eichinger was effusive in his praise for the organization during his remarks and in a follow-up interview. Eichinger credited M7 with providing guidance, noting “you don’t know what you don’t know.” Eichinger credits the organization with M7 helping with everything from site selection to finding the right contractor to lead the build-out of the space.

During his remarks, Eichinger also praised the assistance he received from the city, notably Vanessa Koster and Chris Rute, as well as support and guidance from Colliers International, InStudio Architecture, Inland Construction, brewery staff, family and most importantly his wife and business partner Toni.

Riverwest is no stranger to craft beer, having been home to Lakefront Brewery since its inception in 1987. The Milwaukee brewing pioneer will play host to Democratic vice presidential nominee Tim Kaine on Friday.