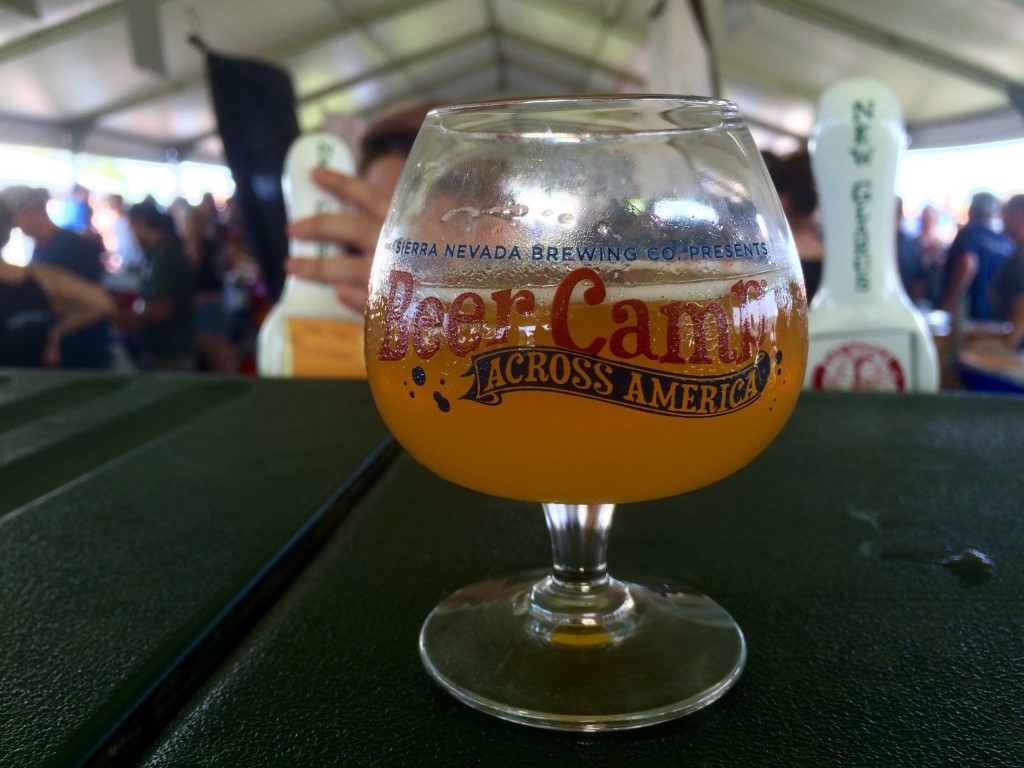 Festival season is upon us and what a weekend it was. PrideFest Milwaukee kicked things off at the Henry Maier Festival Park, while Locust Street came alive for the 40th year of its festival. The weather was hot and humid (until Sunday), which brought out spirited crowds who enjoyed street food, live music, and of course, plenty of drinks. Beer is omnipresent during festival season. Unfortunately, there often tends to be limited options that are exorbitantly priced. Saturday at Veteran’s Park was a different story, as I had the opportunity to cover a festival that put beer front and center, the Sierra Nevada Beer Camp.

Sierra Nevada is a Northern California brewery that started in 1980, almost a decade before our own Lakefront Brewery. They are best known for their pale ale that includes Cascade hops. I have a cousin who went to Chico State for college–Sierra Nevada’s home–and he always bragged about Sierra Nevada. “As a company they do so much good for the community in Chico, plus they make great beer,” he would say. When Sierra Nevada decided to open a brewery in North Carolina their founder and president Ken Grossman got the idea to get on a bus and tour the country. Before the coast-to-coast road trip, Grossman enlisted a dozen brewers to collaborate on a dozen new beers. They brought the resulting brews, and lots of other brewers, to seven cities on their 2014 trip.

Milwaukee didn’t make the cut for the first Sierra Nevada Beer Camp Tour, but two years and six collaborative beers by 31 brewers later, we got our visit from the Beer Camp bus. The festivities were held on Saturday at Veteran’s Park from 3 p.m. to 7 p.m., with early admission (2 p.m.) for VIP (and media) ticket holders. Upon entry we were given a small snifter glass for our unlimited samples. About a hundred brewers were stationed under three tents, with large “water monster” containers spread out on the grounds, which were flanked by an assortment of food trucks.

“You can only really try three beers in one sitting,” a Bell’s Brewery rep told me years ago at a liquor store in Minneapolis. “After that your taste buds will be worn out.” Considering I wasn’t judging in any official capacity at Beer Camp, I dived right in and sampled at least 15 beers, making sure to consume appropriate amounts of water in between.

The first beer I tried was called “Jorge,” a jalapeño ale from Oconomowoc’s Sweet Mullets Brewing Co., that delivered just a touch of heat in an otherwise straightforward ale. It had nothing on the Mango Habanero version of Bell’s Oberon, which they only make for beer fests and beer dinners, due to the high production cost. New Glarus surprised me with a new summer hefeweiss, the “Bubbler,” which has hints of bubblegum and banana. It reminded me of Two Brother’s (Naperville, IL) “Edelweiss,” my favorite summer beer, which contains clove, vanilla and banana tones.

Right before 5 p.m. I noticed a long line forming at D14’s station. The young Bay View brewery was tapping a peanut butter cup firkin, with one of the brewers shouting “Peanuts!” like he was a baseball park vendor. The special release was finished before I had a chance to try it, but I made up for it with Grand Rounds’ (Rochester, MN) “Alien Candy” peanut butter milk stout, one of my favorite dark beers of the day. D14’s popular firkin reminded me that Milwaukee Firkin Beer Fest is coming up July 23rd at Cathedral Square Park. 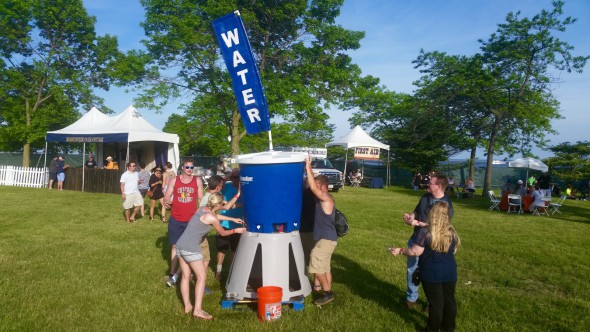 On my way to one of the water monsters I ran into Russ Klisch, Lakefront’s President and co-founder. I asked him if there were any festivals like Beer Camp when he was starting out in the late 1980s.

“Absolutely not. This is an awesome event. You’ve got seven different important groups of people here. You have the home brewers, the brewers, the vendors, the accounts, the distributors, the press, and beer fans. That’s something you don’t normally find at a beer festival. I was at Schwabenhof the other day and that was the best collection of home brewers in Milwaukee, but you’ve got everybody here. It’s very well run too. I gave the 4 o’clock [Lakefront] brewery tour yesterday and one couple had flown in from Detroit for this festival.”

There were a few ciders at Beer Camp and the exclusively gluten-free outfit Burning Brothers (St. Paul, MN), whose Coffee Ale ranks up there with any traditional (gluten included) coffee beer. Michigan-based Vander Mill’s “Hard Apple” is one of the best new ciders on the market, but their “Totally Roasted” (cinnamon, vanilla, pecan) was underwhelming. It paled in comparison to a cider I had in Toronto two weekends ago; Revel Cider Co.’s (Hamilton, Ontario) “Darjeeling Inc.,” made with vinous Darjeeling tea, elderflower, honeysuckle and jasmine.

Solemn Oath Brewery (Naperville, IL) had my favorite beer names: “Punk Rock for Rich Kids,” a single hop Belgo-American pale, and “Butterfly Flashmob,” a Belgian style IPA. The latter sounds a lot like our own Brenner Brewing’s “Butterfly Farts,” a lemon, lime, orange peel, coriander and nutmeg summer ale. Speaking of Brenner Brewing, Mike Brenner will be getting new brewing neighbors on the north end of South 5th Street next month. MobCraft Beer CEO Henry Schwartz told me Brenner let them brew their last couple of batches at his facility while they finish up their space at 505 South 5th Street, which will be open the first week of July.

The other newcomer to Milwaukee’s brewing scene is Good City Brewing Company, opening this Friday at 2108 N. Farwell Ave. Beer Camp was their first public tasting and the beer did not disappoint. Their “Risk” IPA and “Motto” mosaic pale ale were my favorite pales of the day, especially the “Motto,” which has an exquisite nutty, herbal essence. They’ve enlisted a former Rumpus Room chef to head up the full menu at their East Side brewpub, which will surely be bustling this summer.

For me, bigger is better when it comes to beer. I like more flavor, more hops, more alcohol, more intensity. And that’s what the term “imperial” denotes. Naturally, my top two beers of the festival were a Russian imperial oatmeal stout (“Deth’s Tar”) from Revolution Brewing (Chicago, IL) and an imperial red IPA (“Paradocs”) from Waukesha’s Raised Grain Brewing Company.

By the time I got around to trying the Sierra Nevada Beer Camp entry from the Midwest region (which sadly didn’t include any Wisconsin brewers), my mouth was recovering from the heat of a curry chicken plate that I doused with garlic chili oil from the Marco Pollo food truck. As a result, it was difficult to judge the “Family Values” imperial brown ale with cocoa. Luckily for me and anyone who missed the festival, all six of the collaborative Sierra Nevada Beer Camp brews are now available in stores in a one-time-only variety pack. Also, the Milwaukee Brewfest returns to the shores of Lake Michigan for the 7th year on July 30th, promising a similarly fun, frothy and flavorful afternoon. 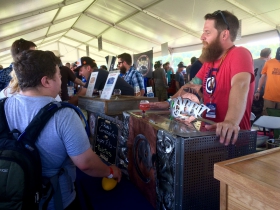 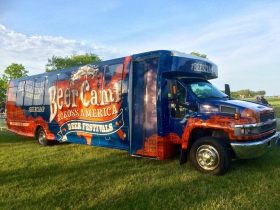 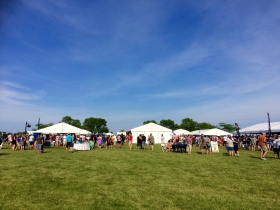 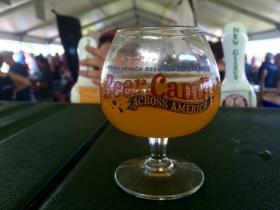 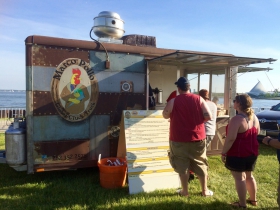 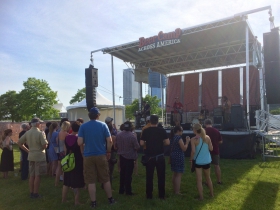