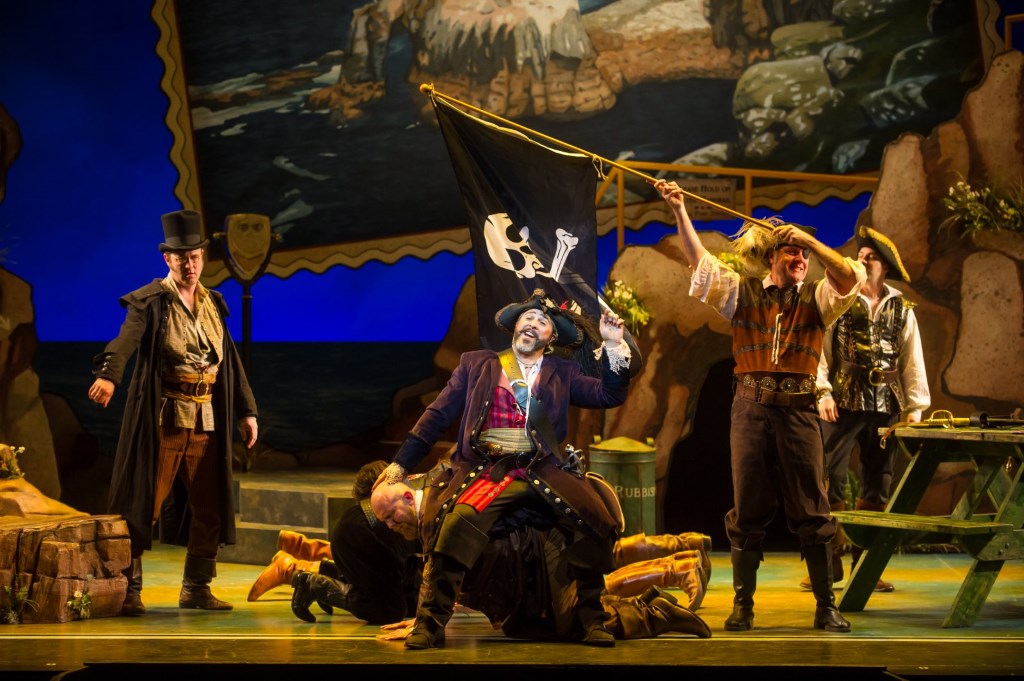 Cast of Pirates of Penzance. Photo by Mark Frohna.

When the Skylight Music Theatre was a cramped stage on Jefferson St. in the 1960s and 1970s, founder Clair Richardson relied not on a subscription audience but newspaper reviews and word of mouth to keep operating. So inevitably, when faced with box office swoons, up popped Gilbert & Sullivan, whose operettas became a staple of instant revelry, relying on bold amateur voices and gestures.

The targets of G&S’s cultural and political satire were the British social system, the pretenses of good breeding and the excesses of opera. Their method was wondrous patter lyrics by W.S. Gilbert set to Schubert-worthy musical fancies and Verdi spoofery by Arthur Sullivan. That combination regaled generations.

But times change. Today’s Skylight is a far more sophisticated, socially attuned subscription audience organization. Yet it is ending a season devoted to the theme of independent women with a renewed golden oldie last done in 2009 — The Pirates of Penzance, through June 12. Only now the theme has been tilted pro-women and particularly toward modernized joking around with both tone and targets.

Now that may seem strange since the Pirates gaggle of young maidens is enamored of landing a man, any man, even if he is part of a bevy of bizarre dancing pirates who forgive all orphans while threatening mayhem. The ladies camp it up, pose outrageously in Victorian garb and sing while juggling cocktails and cigarettes. Stuck on romance in this fey world of strict rules they perform as Amazonian flirtatious libbers — a joke not lost on the Skylight’s veteran audience at the Cabot Theatre in the Broadway Theatre Center.

But what might surprise these patrons is that director Shawna Lucey has not settled for vocal spoofing Il trovatore and operatic conventions. She is more willing to tangle with Beyonce, preening rock stars, Busby Berkeley, a ballet barre made out of nightsticks, TSA airport lines and pop-up photos of Trump and an eye-patched Queen Victoria.

Now the famous tongue twister “I Am the Very Model of a Modern Major-General” uses a canvas flip-board to underline the rapid couplets along with blatant asides to the orchestra pit. It’s a Falstaffian burlesque by the loveable Drew Brhel, who also dances around the stage like an overweight woodland nymph with scarves — when not eating popcorn while others explain the plot.

The production is a recognition that visual cues are even more necessary to today’s audience than sophisticated word plays and melodic echoes were in G&S’s 19th century.  Such free-form inventiveness – gags unfolding wherever the eye looks, modern references in the middle of familiar scenes — may unsettle purists but they will be offended only through their eruptions of laughter. The Skylight’s staging has more to do with today’s sarcasm toward all tradition and political topics, virtually embalming the precision interpretations of the D’Oyly Carte company that toured the English speaking world into the 1980s, setting a G&S standard. This Skylight invention is frequently so well done that we happily go along.

The choreography by Ryan Cappleman is attuned to Lucey’s ideas, letting the pirates mince and prance in ironic contrast to their vaunted masculinity. Things get a little messy when the police squad comes in to strut and tremble (double duty for the male ensemble), but this policemen’s lot is comically anchored by a polished G&S basso, Martin Lowen Poock. Throughout, music director Robert Linder and a 15-piece crew melodically sigh and rollick in empathy with the singers. The orchestra’s classical feel is exact, but the best staging in this production aims at a younger audience that reacts to sight puns and interpolated flashes of parody that may go over the heads of those who never heard of Jay Z nor really watched a Super Bowl halftime show.

Devotion to duty drives what passes for a story as handsome dupe Frederic is indentured by error to the pirates, falls in love with both freedom and Mabel in his 21st  year and then discovers he was born on February 29, so he has to wait 46 more years to marry (duty, you know). 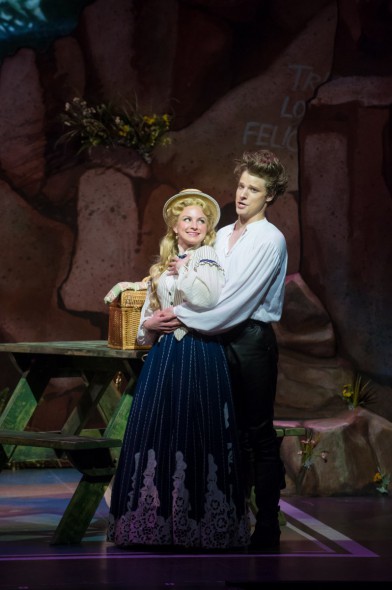 But the plot takes a deserved back seat to the antics, some inspired by the cast’s improvisation skills, some deliberately inserted into dialogue and mime. Scenic designer Peter Dean Beck provides a waggish rococo motif edged with script devices to underline Lucey’s approach. It’s a set that sometimes seems too crowded for an always busy whirling ensemble handling everything from flower petals to teddy bear. Shima Orans enhances with quick-change costumes of great efficiency and secret cubbyholes. Patrons will be amused and amazed by the familiar tunes that bounce through the score. (So you thought “Hail, hail the gang’s all here” was a folk song?)

Two leads are first rate voices, asked to mock and sing with equal flourish. Benjamin Robinson catches every romantic and comic posture imaginable as the shy, ridiculously pliant Frederic, while Julie Tabash Kelsheimer as his Mabel casually tosses off wonderful coloratura passages as if trills are no problem for any bel canto feminist.

As the pirate king, Andrew Varela mocks the role while playing it to the hilt. As the intrusive lovelorn Ruth, Diane Lane mugs shamelessly and sings with gusto. The tireless ensemble should be recognized for constant handling of absurd props and sumptuous flowing chorales, but in truth they are so busy with the staging tricks that they don’t anchor themselves to blend as tightly as they could for the musical notes.

Somehow Frederic and Mabel are equally busy but land every note to perfection. This is impressive singing.  The comedy of the duo’s courtship may be first in their minds, but their big voices warmly blend in a rare second act moment of total respect for the beauty of Sullivan’s music.

Indeed as the years pass, it is more of a miracle how Sullivan created this mixture of laughing at the classical masters while matching them. It is a skill often disguised by the verbal invention of Gilbert.

The Pirates of Penzance Gallery 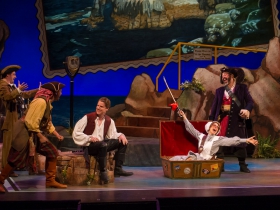 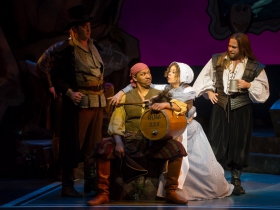 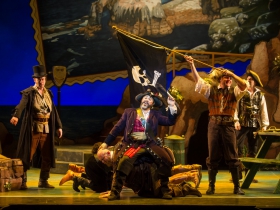 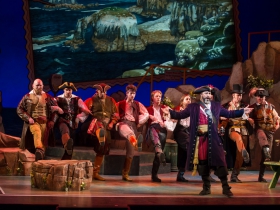 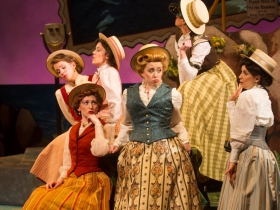 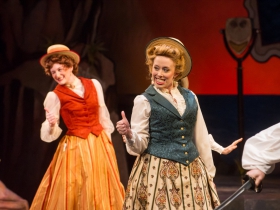