42 Lounge Is Shrine to Nerd Culture

Downtown bar has lots of video and tabletop games, along with good happy hour prices. 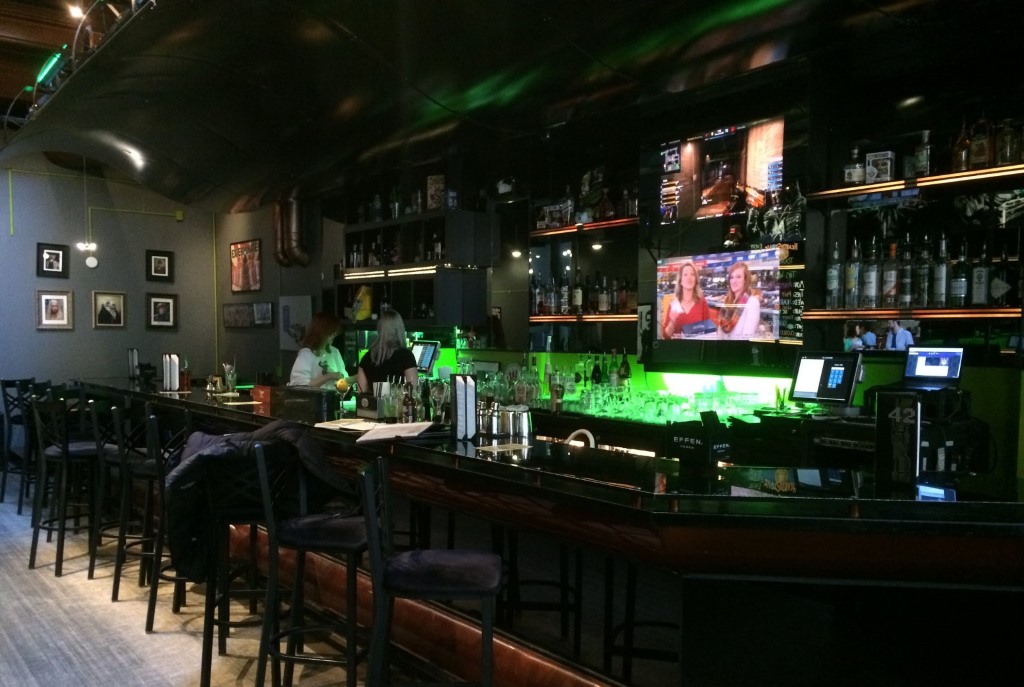 This week the GOP presidential circus rolled into town as the Riverside Theater and CNN hosted a Republican Town Hall on Tuesday evening. While having my teeth cleaned at Dental Associates in the recently restored Iron Block Building I watched police close off streets and set up barricaded zones. I planned to stop in at Mo’s Irish Pub afterwards to sample their happy hour and continue to watch the circus from a front row seat. Police on Plankinton Avenue told me the bar was open but I’d have to enter “from the west,” i.e. Wisconsin Avenue. So I went around the block and the cops on Wisconsin Ave said I had to approach from Plankinton. This circus was apparently not well-run, so I changed my happy hour destination to a different downtown establishment across the river, 42 Lounge (326 E. Mason St.).

While politics tends to be a game for the rich, 42 Lounge specializes in other sorts of games, specifically video and tabletop. It is a haven for geeks and a shrine to nerd culture. Their happy hour is always a winner, with $3 bottles of Lakefront and Spotted Cow, plus half-off rails (regularly $5 short, $7 tall), from 4 p.m. to 6 p.m., Monday through Friday. Their selection of Lakefront beers varies and includes seasonals, with about four to choose from. There are no taps at 42 Lounge. Their sister location in St. Francis, 42 Ale House, has over 20 tap lines and different specials. 42 Lounge does have a nice selection of about 30 craft beer bottles and cans. I ordered a 3 Sheep’s My Name is Joe Imperial Black Wheat Coffee Ale and it is one of the best coffee beers I’ve had.

With 42 Ale House being beer-focused, 42 Lounge puts more attention on cocktails. Lynn Nilles, who owns both bars with her husband Anthony Nilles, told me there tends to be an experimental cocktail on special any given night depending on the bartender. Their themed cocktails regularly run between $8 and $10, rotating quarterly. They also make martinis ($10-$11) and specialty shots ($4-$5). Lynn said they are compiling a list of customer favorite cocktails to be included on their next menu. Currently the most popular cocktail is called Butterbeer, a “super sweet, super boozy, super secret” concoction, as she described it, that can be served hot or cold.

If you’re stopping in at 42 Lounge chances are it’s not just for a drink, but for one of their many video or tabletop games. The bar is modestly sized and the entrance is flanked by big screen TVs and rows of comfy leather chairs with cup holders. You’re welcome to bring in your own video game (Xbox 360, Xbox One, PS4, WiiU) or choose from their ever-expanding menu of games. Their collection of tabletop games range “from chess to Arkham Horror,” and includes drinking games from around the world, plus a game called “Exploding Kittens” (“It’s like Uno, except there are magical goats, enchiladas and kittens that can kill you!”). They even have a Milwaukee trivia game. Of course, a purchase is required before playing any games.

The weekly specials at 42 Lounge vary, but you can always count on Karaoke Wednesdays with a shot special, hosted by Jasonrocks. On Tuesdays they have a Hearthstone Tournament and shot special starting at 7 p.m. That game is an extension of the World of Warcraft universe and if you agree ahead of time the loser buys a round of shots. They will also occasionally host a “Pint & Play” night where staff and patrons learn a new game together.

Next weekend you can find 42 Lounge at the Midwest Gaming Classic. That is a two-day convention (April 9th & 10th) at the Brookfield Sheraton that Lynn describes as “a super cool weekend with so much awesome stuff to do.” 42 Lounge will be serving non-alcoholic drinks at their booth and running a shuttle to and from the Sheraton to their downtown bar. While 42 Lounge serves a selection of mocktails, Sprecher sodas, energy drinks and Coke products, the bar is always 21+, though 42 Ale House allows minors until 10 p.m.

42 Lounge opened on May 4th, 2013, perhaps for mysterious reasons (“May the fourth be with you”?) — okay, just kidding. This year they will celebrate their three-year-anniversary with a weekend-long “42 Fest,” which will include live music, a Star Wars party and drink specials. Last year they brought nerd favorite band Freezepop to Turner Hall Ballroom. Speaking of the Pabst Group, their PR Director Andy Nelson told me that 42 Lounge is one of his favorite bars in town. “Honestly, I don’t think we’d be where we are without Andy, he’s an amazing guy,” said Lynn.

This year Freezepop’s bassist/keyboardist will be playing a solo show (Symbion Project) at 42 Lounge on May 5th. The weekend before that includes International Tabletop Day (April 30th), which they’re turning into a two-day celebration. When I stopped in this week the soundtrack started out with electronic music I didn’t recognize, but then moved into familiar territory with songs from Death Cab for Cutie, Metric and M.I.A. As I was getting ready to head out Lynn was describing their new whiskeys to a pair of customers. She claims that Teeling Irish whiskey puts others to shame and their Nikka Coffey Grain Japanese Whiskey is a unique spirit creation. Whatever you pair with your gaming experience at 42 Lounge, it’s sure to be a fun time. 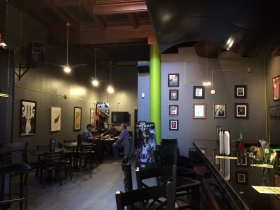 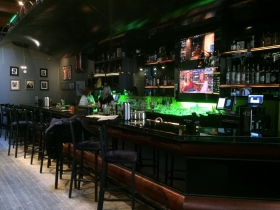 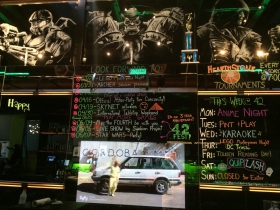 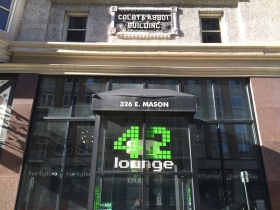 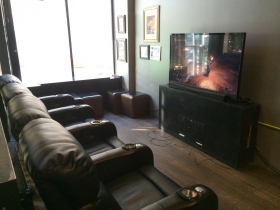 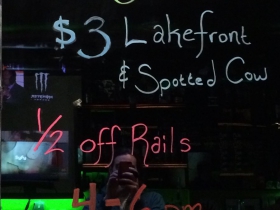