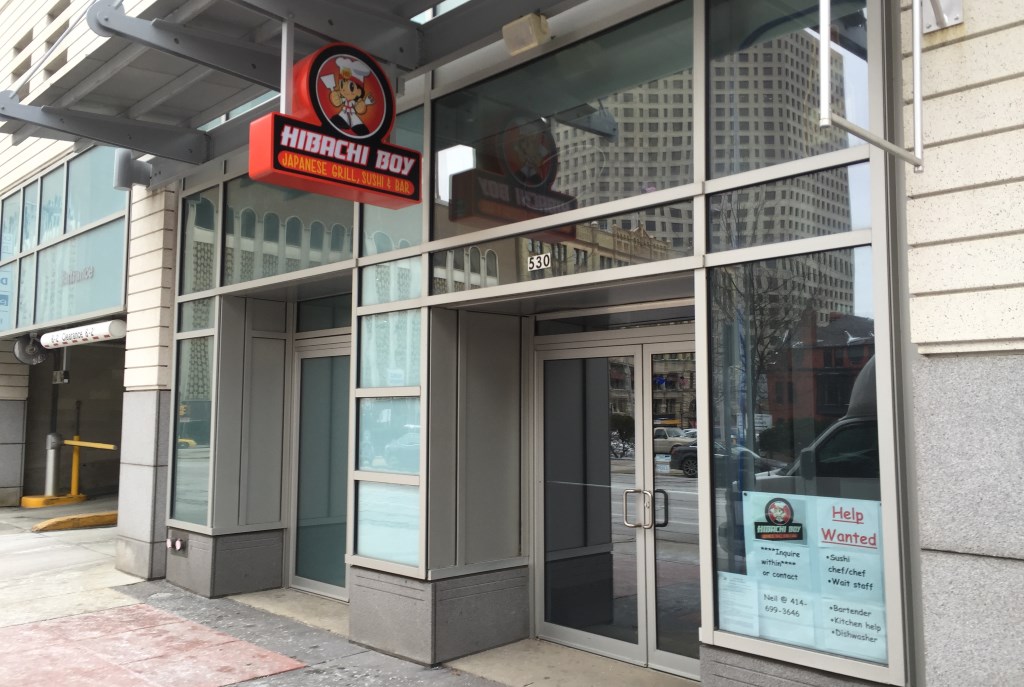 Here’s the latest restaurant and bar news of the week.

Hibachi Boy hopes to open in March in the space formerly occupied by Fajitas Grill at 530 E. Mason St. The restaurant will be run by Neil Gonzaga along with his sister Roung Kumgool and brother-in-law Jun (Philip) Sayavong. OnMilwaukee.com‘s Lori Frederich reported on the new restaurant.

“Gonzaga, who has a background in naturopathic medicine, says he’s always been interested in food and getting into the restaurant business. Hibachi Boy presented an opportunity which is both in keeping with his passion for food and a desire to share delicious and healthful food with Milwaukee.”

“Gonzaga says that the hibachi aspect of the restaurant won’t be traditional; items will be prepared in the kitchen, rather than in front of guests. However, he says he wants the space itself to be a draw, along with the good, fresh, healthful food. Unlike its sister restaurant in Kansas, the Milwaukee Hibachi Boy will be less of a fast-casual spot and more of a sit down experience, he says. The space, which incites elements of the natural world with its wooden paneling, granite-topped bar and hibachi fire, works to reinforce Gonzaga’s vision.”

A forwer bicycle shop will become a brewery. The Milwaukee Business Journal’s Olivia Barrow reports on Good City Brewing coming to the Lower East Side.

“The first brewery on Milwaukee’s east side is joining five other microbreweries that plan to debut in 2016.

The 6,600-square-foot space will house a 17-barrel brewhouse capable of producing a maximum of 10,000 barrels per year. Co-founder David Dupee of crowdfunding platform CraftFund, said the brewery will start out at about 2,000 barrels per year, under leadership of brewmaster and co-founder Andy Jones.”

Over Valentine’s weekend, Pepi’s Place quietly opened its doors at its new East Side location at 1330 E. Brady St., which combines spaces that once held Philly Way and Berry Me Frozen Yogurt & Cafe. It was originally a takeout place on Howell Ave., but the owners decided to close and move to Brady Street. Fredrich reported that there will be more than just takeout here.

“The menu at Pepi’s includes a variety of classic recipes from the original Pepi’s Place, which opened in 1953, including pasta dishes like lasagne ($10.95), stuffed shells ($9.95) and chicken parmesan pasta ($10.95). It also offers a variety of appetizers, salads and sandwiches, along with their signature pizza, fish, ribs and lasagna.

A new cafe and juice bar owned by Dawn Balistreri has opened on the north side of Downtown at 1401 N. Martin Luther King Dr. Carol Deptolla of the Milwaukee Journal Sentinel has the story.

“Balistreri was trying out a new vegan recipe at home every night, and had been juicing for years. She put the two together for her new business, Urban Beets Cafe & Juicery, which opened Friday at 1401 N. King Drive.

The counter-service cafe is open weekdays for now and will open on weekends in the summer.

Urban Beets’ menu items include the Save the Tuna sandwich ($6.95), made with almonds and sunflower seeds and flavored with celery, dill, capers and pickle, a cranberry walnut chickpea sandwich ($6.95) and raw tacos, wrapped in romaine ($6.95).

The cafe also has a daily soup, such as spicy raw tomato.

All food menu items are vegan; most are gluten-free or can be made with gluten-free bread, Balistreri said.”

A new chef will take the helm at the Hinterland. Out is Dan Van Rite, who is starting a new restaurant just a few blocks east, and in as general manager and executive chef is Matt Kerley. Fredrich has more for OnMilwaukee.com.

“Although the Hinterland concept will stay virtually the same…Tressler [Hinterland owner Bill Tressler] says there will be an inevitable imprint on the restaurant’s offerings, based on Kerley’s individual style and strengths.

“We really give each chef carte blanche to do what they want to do. And each one works with different local farms. I want the restaurant to really reflect what is fresh and what the chef does well.”

A Milwaukee institution is back in business. Sophia Boyd of the Milwaukee Neighborhood News Service has the story on the return of Lopez Bakery to 1601 W. Lincoln Ave.

Over time, all but two of the bakeries — one at 1100 W. Historic Mitchell St. and the other in Racine — closed down.

Now, Jeanette Martin and her father, Adolfo Martin, Lopez’s friend and client, plan to reopen the previous location that closed down 10 years ago at 1601 W. Lincoln Ave. Jeanette Martin, 26, was inspired by travel to cities such as New York and Los Angeles to go beyond traditional Mexican fare.”