This holds true for Wisconsin, where the gap between black and white students is the worst in the nation, according to national test results. Wisconsin is also one of the worst states to live if you are black, according to the 2013 Race to Equity report by the nonprofit Wisconsin Council on Children and Families, which exposed deep racial divides in Dane County and across the state.

Reardon concluded that schools can reduce educational disparities but they have not eliminated them. Out-of-school inequalities related to family and neighborhood conditions and resources are likely to blame for large achievements gaps in states like Wisconsin.

“Without more directly reducing these socioeconomic disparities, we are unlikely to be able to fully eliminate inequality in educational outcomes,” he wrote.

That is where Porco’s “anti-poverty” housing model may come in. It is a system that links social services, educational opportunities, stable housing and even job opportunities where people live.

Porco began his experiment after taking over several low-income housing sites in 1974 — including Packer and Northport in Madison and Greentree-Teutonia in Milwaukee. Madison Mayor Paul Soglin praises the beneficial effects of the learning centers on the community. He keeps an analysis of Porco’s program in a computer file called “The Carmen Method.”

“I turn to (the file) on occasion to review what it is you have been doing when I’m at a point where I’m not sure which path to take,” Soglin told Porco at the Northport and Packer scholarship banquet in October.

Porco said he aims to fill a “community gap” by making services readily available rather than waiting for residents to seek them out.

“We have to integrate our services to meet the whole person’s needs,” Porco said. 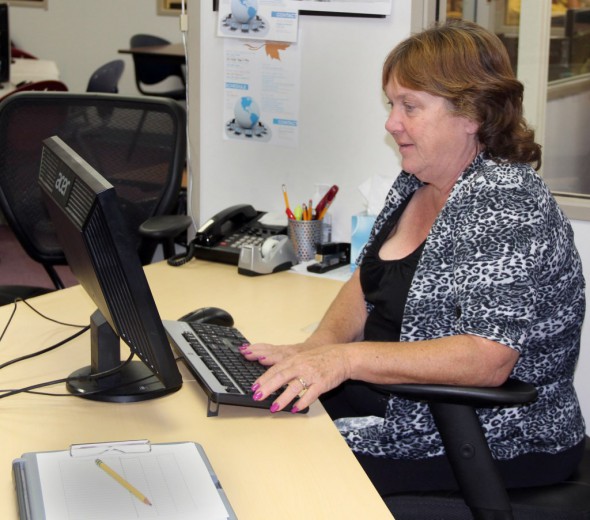 June Johnson, a Northport resident, attended but did not graduate from Madison East High School. Years later, she earned her high school equivalency degree through the learning center’s program. She describes the center as a “great salvation for some people.” Photo by Abigail Becker of the Wisconsin Center for Investigative Journalism.

Susan Goetz, an instructor with Madison College, teaches adult basic education and GED classes at Packer and English as a second language at Northport in Madison. She works with adult students who did not make it through high school and are “already at a disadvantage.”

“I try not to let people give up,” said Goetz, who has worked at the learning center for 17 years.

June Johnson, a Northport resident, is among those who did not give up. In 1989, after a divorce, Johnson moved into the low-income apartment complex with her three children. She began working at the learning center eight years later.

Johnson attended but did not graduate from Madison East High School and eventually earned her high school equivalency degree through the learning center.

“(The center is) a great salvation for some people, and I was one of them,” Johnson said.

Housing instability is another barrier to school success. When parents move around chasing lower rents or because of life changes, children can be shuttled from school to school. Changing schools and adjusting to new sets of teachers and classmates takes a toll on students’ educational and social progress.

And thousands of Wisconsin students have no permanent home. They may not have quiet places to study or even know where they will fall asleep on a particular night.

In the 2014-15 school year, there were at least 18,000 homeless students across Wisconsin — a number that has more than tripled since 2003-04. Among homeless students across the state, there are 14,294 students who share housing with other families, 333 who have nowhere to live, 2,271 living in a shelter and 1,409 living in a hotel, according to DPI data. Districts with the greatest number of homeless students in 2014-15 included Milwaukee (3,654), Racine (1,485), Madison (1,380), Green Bay (1,148) and Beloit (653). A 2013 federally funded study on school mobility found such students were more likely to do poorly in school or drop out and have low self-esteem. Subsidized housing and on-site educational programming could help counter those negative outcomes.