By Abigail Becker, Wisconsin Center for Investigative Journalism - Dec 21st, 2015 10:43 am
Get a daily rundown of the top stories on Urban Milwaukee

In the past year, the Republican-run state Legislature, with the blessing of Gov. Scott Walker, eliminated the state’s race-based integration program, known as Chapter 220, and made changes to a class-size reduction program, Student Achievement Guarantee in Education, in moves that critics charge will harm the state’s ability to close the achievement gap.

Chapter 220 pays for the transportation and education of students who transfer to another school under the voluntary program. Researchers disagree about whether integration can raise achievement among students of color. Some studies show a positive effect, others find it inconclusive, and still others say integration is not a solution. 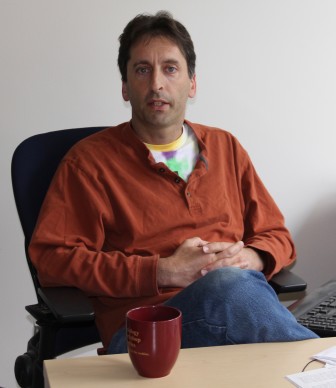 Eric Grodsky is an associate professor of sociology at the University of Wisconsin-Madison and an expert on inequality in higher education. Grodsky is leading a $5.2 million effort to study which strategies may help close the huge gap between how well black and white students perform in Wisconsin schools. Photo by Abigail Becker of the Wisconsin Center for Investigative Journalism.

University of Wisconsin-Madison education researcher Eric Grodsky said “we’ve been down this road” of integration. While noting beneficial characteristics of a diverse school, “just putting a kid in a school with some more advantaged students isn’t going to solve all the kid’s problems,” he said.

SAGE funds schools with low-income students in kindergarten through third grades to keep class sizes small. During its 20 years, it has been shown to raise achievement and graduation rates, especially among black students.

The Legislature replaced SAGE with a new program, giving schools more options to fulfill the grant requirements beyond just lowering class sizes. The state Department of Public Instruction charged that will “dilute” the positive impact of the program.

Senate Education Committee chairman Luther Olsen, R-Ripon, said he favored the changes recommended by the Joint Legislative Council because some schools whose efforts did not meet the SAGE requirements would have been dropped from the program. By adding more options, he said, these schools can continue to qualify for funding.

The new program, called Achievement Gap Reduction, allows schools to use the funding to provide instructional coaching for teachers and one-on-one tutoring for students in addition to or instead of reducing class sizes.

Olsen cited a 2007 Wisconsin Center for Education Research report, which estimated that giving teachers coaching on how to improve their teaching works better and is more cost-effective than smaller class sizes. It concluded that “improving teacher effectiveness through high-quality professional development is arguably as important as all of the other resource strategies identified” — including small class size.

Said Olsen, “These strategies give us more bang for our buck than just class sizes.”

Only schools that previously received SAGE funding are eligible to apply under the new program because there is no new money to fund them, he added.

The 2015-17 budget appropriates $109.2 million a year for the program, the same amount that has been allocated for the past several years, according to DPI. Schools are guaranteed $2,027 per eligible student under the bill.

Researchers at the Value-Added Research Center at the University of Wisconsin-Madison Wisconsin Center for Education Research have evaluated SAGE’s effectiveness 10 times over 20 years.

The center’s 2015 report concluded that the SAGE program had a positive effect on math and reading for students in kindergarten through third grade. Long term, they found that students in SAGE schools were less likely to drop out in the ninth and 10th grade, especially black and poor students, and more likely to graduate.

“I believe we improved SAGE from what it was,” Olsen said. “I don’t know how much more, but we didn’t make it worse … that’s all you can do.”

Integration program on way out

The state’s 2015-17 budget phases out Chapter 220 and redistributes its roughly $60 million in funding. The eventual elimination of the voluntary integration program impacts Milwaukee and its suburban districts as well as schools in Madison, Racine and Wausau.

Proponents of phasing out Chapter 220 cite the declining participation and say students can take advantage of the state’s open enrollment program, which allows children to attend public school in a district other than the one in which they live.

However, that program is not race-based and does not provide funding for transportation, making participation by many of Milwaukee’s poor students much more difficult and not an “equal substitute,” said Demond Means, superintendent of the Mequon-Thiensville School District.

“Striking down access to these schools, I believe, is a step backward for inclusive practices in our state,” Means said.

State Superintendent of Public Instruction Tony Evers noted the importance of the Chapter 220 program but said the number of eligible schools is declining, diminishing the program’s original effect. He cited Brown Deer as an example, which he said is a district typically thought of as an “almost all-white suburban district” when in fact it has more black students than white.

“That’s happening all around, so even if the Legislature hadn’t gotten rid of the 220 program this last go-around, it was steadily shrinking to a point where it really wasn’t having an immediate effect that it originally had,” Evers said

The Racine School District plans to eliminate policies designed to integrate schools by giving preference to minority and students with special needs who seek to attend one of the district’s “choice” schools. Spokeswoman Stacy Tapp told the Racine Journal Times the district is committed to diversity, but because of federal court decisions in recent years, the current policies are now likely “illegal and unenforceable.”

While researchers are mixed on whether integration solves racial gaps, New York Times reporter Nikole Hannah-Jones said in a National Public Radio episode of This American Life that after years of reporting on education, she believes integration is the only solution to racial achievement gaps and that no one is talking about it.

“What integration does is it gets black kids in the same facilities as white kids,” Hannah-Jones told the NPR host. “And therefore, it gets them access to the same things that those kids get — quality teachers and quality instruction.”