Despite decades of efforts to close gap, little improvement has occurred.

By Abigail Becker, Wisconsin Center for Investigative Journalism - Dec 19th, 2015 02:17 pm
Get a daily rundown of the top stories on Urban Milwaukee 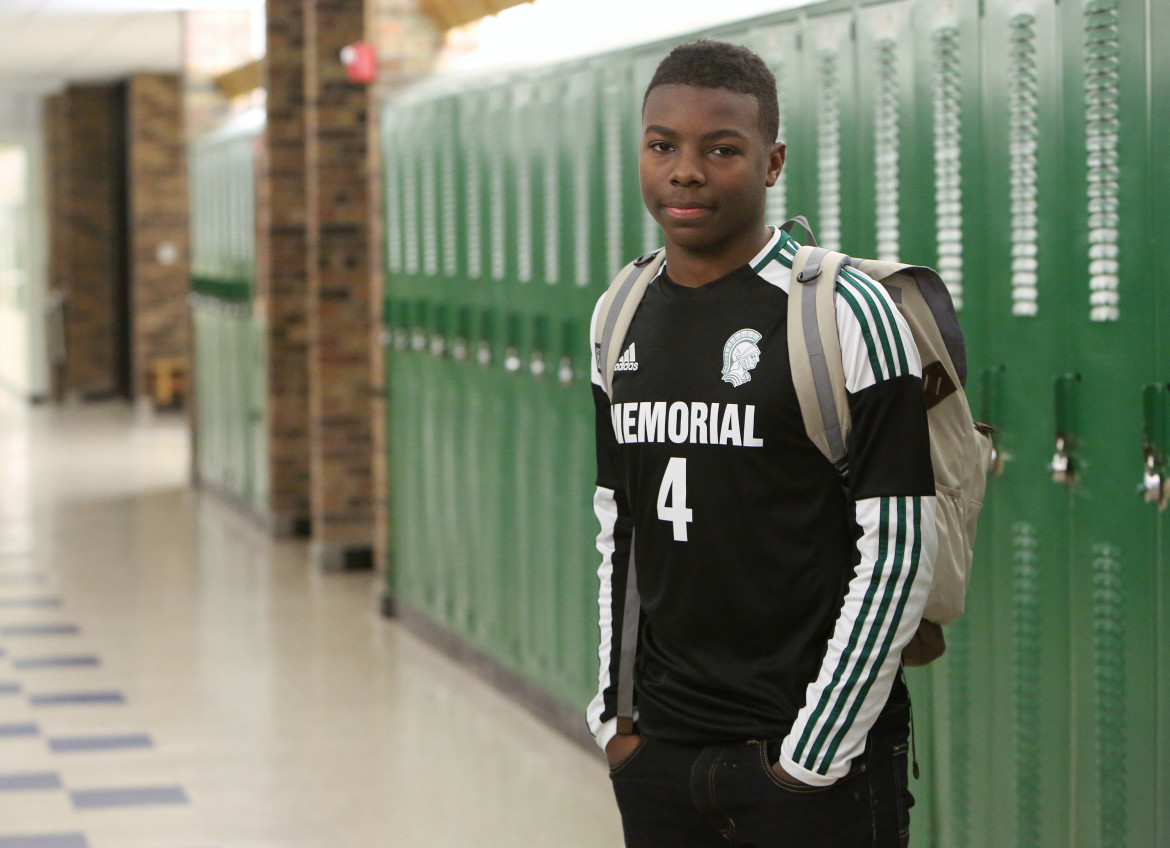 Demitrius Kigeya, a sophomore at Madison Memorial High School, is a high academic achiever, plays on the school soccer team and is actively involved in the school’s Black Student Union. He says some of his classmates do not expect him to do well in school because he is black. Photo by Michelle Stocker of The Capital Times.

When Madison Memorial High School sophomore Demitrius Kigeya solves math problems in his head, other students give him surprised looks. He believes it is because he is black.

“I just pay attention in class and do my homework,” said Kigeya, 15. 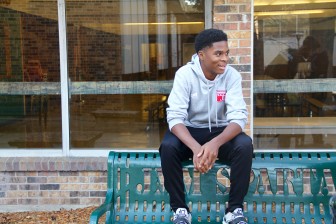 Odoi Lassey, a junior at Madison Memorial High School, can count on one hand the number of minority students in his advanced placement classes. This semester, he is taking Advancement Placement biology and English. Photo by Abigail Becker of the Wisconsin Center for Investigative Journalism.

“People don’t expect you to know anything,” explained Lassey, who, like Kigeya, is a high academic performer, plays on the high school soccer team and is active in Memorial’s Black Student Union.

“It’s almost as if you know something, they think you’re weird or you’re acting white … some people think you’re not black just because you try to help yourself out and do well in school.”

The negative stereotype that follows students such as Kigeya and Lassey is rooted in Wisconsin’s dismal racial academic achievement record.

A Wisconsin Center for Investigative Journalism review of two decades of data pertaining to black-white academic disparities yielded few signs of progress. In fact, the gap has widened in some areas during that time.

Today, Wisconsin ranks the worst in the nation for:

Although Republican Gov. Scott Walker has touted Wisconsin’s educational gains under his administration, students of color for the most part are not sharing in that success. Data reviewed by the Center show many troubling patterns essentially unchanged throughout the tenures of Walker’s predecessors, including Democrat Jim Doyle and Republicans Scott McCallum and Tommy Thompson.

Today marks the first installment in the Center’s investigation, Children Left Behind: Inside Wisconsin’s Achievement Gap, that in coming weeks will explore reasons for faltering performance and ways to improve the state of education for Wisconsin’s poor children and students of color.

Wisconsin has been labeled one of the worst states in the nation for black children based on measures including poverty, single-parent households and math proficiency. Statewide, just over 15 percent of black students tested proficient on statewide exams in math, compared to 43 percent of white students, according to 2013-14 test scores from the state Department of Public Instruction.

Tony Evers, the state superintendent of public instruction since 2009, conceded there is only one way to describe Wisconsin’s achievement gap: “It’s extraordinarily horrible.”

The gap, he said, has racial and economic causes.

“Can we do more in our schools? Yes, and we should do more. But the fact of the matter is, we need the entire state to rally around people of poverty or this will never be solved in a satisfactory way.” 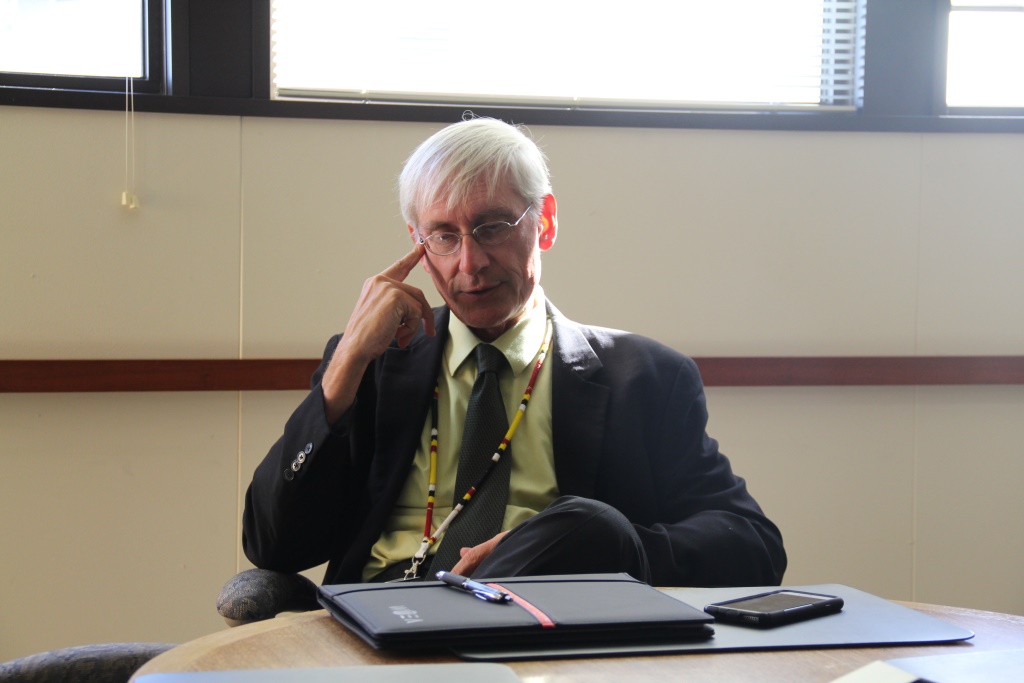 The struggles of Wisconsin’s black students are particularly stark, considering the state’s students as a whole perform at or above national averages on standardized tests, the class of 2014 graduated at the third-highest rate in the nation, and Wisconsin high schoolers are among the top scorers on the college aptitude ACT test.

The shortfalls in Wisconsin dramatize the failure of national efforts to raise achievement levels. Congress passed the No Child Left Behind Act in 2001 in an effort to close the achievement gap, placing great emphasis on standardized testing. However, Congress left the law behind after years of partisan bickering. President Barack Obama signed the changes into law Dec. 10.

The new law shifts more power to states and districts. States are still required to take steps to improve the lowest performing schools, but the bill does not mandate specific action if those goals are not met.

Evers said the bill provides an “opportune” time to discuss equity in schools.

“Allowing states to explore different methods, centered on their needs, to tackle achievement gaps will ensure that all students graduate ready for college and career,” he said in a statement.

Test results released in October from the 2015 National Assessment of Educational Progress, a set of tests known as the Nation’s Report Card, reaffirmed Wisconsin’s poor record of educating black children: The state had the worst achievement gap between black and white students in fourth- and eighth-grade reading and math. This is the second time in a row Wisconsin has been ranked the worst among the states assessed.

Wisconsin also has the biggest disparity in graduation rates between black and white students, according to preliminary data from the U.S. Department of Education. The rate for black students in Wisconsin held steady in 2013-14 at 66 percent, while the graduation rate for white students rose a half-point from just over 92 percent to just under 93 percent.

The causes of this gap are complex and extend beyond the four walls of a classroom, often preceding students’ first steps through the schoolhouse doors, researchers say. Factors include poverty and unemployment, historic discrimination, segregated schools and neighborhoods, racial bias and low expectations that damage students’ motivation.

Fatoumata Ceesay, a freshman at the University of Wisconsin-Madison who attended Madison East High School, attributes her academic success to two college readiness programs, one through school and another that offers after-school and summer programming. 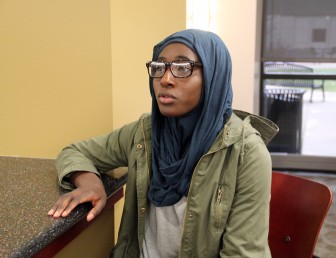 Fatoumata Ceesay is a Madison East High School graduate and a freshman at the University of Wisconsin-Madison. She credits the Advancement Via Individual Determination (AVID) program with her academic success and college acceptance. In her experience, Ceesay said, students of color often face low expectations from teachers. Photo by Abigail Becker of the Wisconsin Center for Investigative Journalism.

Ceesay, a student of color, said in her experience, students of color were not challenged in school and operated under low academic expectations. “Usually students of color are dissuaded from trying so hard and that really, if you’re not encouraging someone, you’re going to give up eventually, which is what happens,” said Ceesay, an aspiring photojournalist planning to major in journalism and political science. Like Ceesay, some students of color at Memorial also say they were not expected to excel. Lassey, for example, said he is one of three students of color in his Advanced Placement biology class and one of four in AP English. He is also taking French 4, the last class before AP French, and will be taking AP microeconomics next semester. Lassey sought out those classes. But Memorial High School Principal Jay Affeldt said he and Memorial’s teachers now approach students instead of waiting for them to self-select into more rigorous classes to increase minority participation in AP classes. A 2014 College Board report showed that 3 percent of black graduates in 2013 took an AP class during high school, compared to 85 percent of white students. 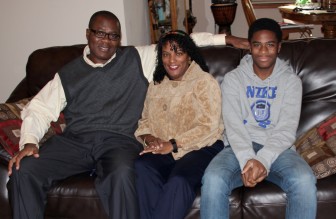 Mensah and Natasha Lassey, parents of Madison Memorial High School junior Odoi Lassey, say they have advocated for their two sons in situations where they felt counselors and teachers were pushing them out of more rigorous courses. Photo by Abigail Becker of the Wisconsin Center for Investigative Journalism.

Mensah and Natasha Lassey, Odoi’s parents, experienced low expectations firsthand when they advocated for their two sons in situations where they felt counselors and teachers were pushing them out of more rigorous courses. The Lasseys’ oldest son is now 20 and attends Madison College, formerly known as Madison Area Technical College. In one instance, in a conference with an honors course teacher, the couple said the teacher was focused on removing Odoi from the class instead of working to keep him in it. “Here we are as parents, trying to help him, and all (the teacher) can focus on was trying to get him out of the class,” Natasha Lassey said. Mensah Lassey acknowledged the importance of accepting responsibility as parents but worries for the students of families who cannot be actively involved in their children’s education. “(It) boils down to economics,” he said.

One thought on “Children Left Behind: State Has Worst Black-White Learning Gap”