Chris Larson wasn't there for victory celebration, so county board chair takes charge. 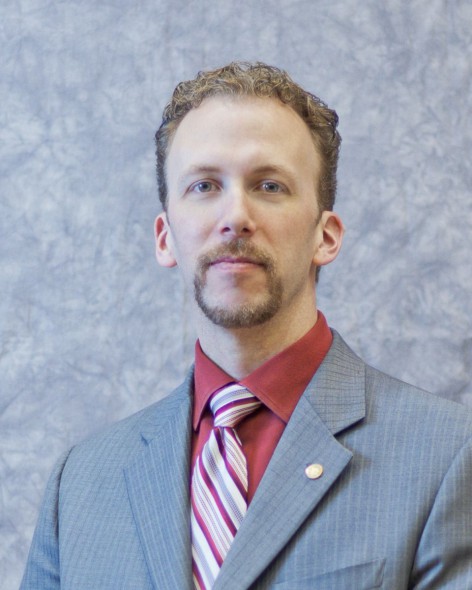 “We thought we would do well, but we weren’t expecting a dead heat,” said Milwaukee County Board Chair Theo Lipscomb at the Chris Larson for County Executive headquarters election night.

Lipscomb spoke Tuesday night on behalf of Larson, who was missing at his campaign’s big night, even as TV crews were looking for a spokesperson to film. The challenger got a surprising 48,258 votes, narrowly edging incumbent Milwaukee County Executive Chris Abele (47,550 votes) in last night’s primary election. Larson was in Madison for a whirlwind meeting of the Legislature scheduled to last into the wee hours of Wednesday morning. And so Lipscomb spoke instead, hailing what was then a virtual tie (with about 96 per cent of the vote tallied, Larson was then still a couple hundred votes behind Abele).

There were two other candidates in the race — Steve Hogan and Joseph Klein, who had about 11,000 votes between them. “Their voters aren’t Abele voters,” Lipscomb added, with some sense of satisfaction. Indeed, the vast majority of those votes will likely go to Larson in the April election.

There was some symbolism in the fact that Lipscomb presided at this celebration. Larson is a former county supervisor who will probably be supported by nearly the entire board, and he has criticized Abele for the state law that reduced board members’ pay and support staff, effectively making supervisors part-time representatives as of this April. And Lipscomb has led the way in bashing Abele for a state law that gave the county executive nearly unilateral power to sell county land. That includes county parks not zoned as parkland, though Abele has said he wants local municipalities to rezone the land to make sure it is protected, as Urban Milwaukee has reported.

Abele’s opponents on the board also include former board chair Marina Dimitrijevic, whose organization, the Wisconsin Working Families Party, issued a news release hailing Larson’s victory. “Voters are hungry for a Milwaukee that truly works for all the people, not just a wealthy and well-connected few,” the press release noted, in a slap at Abele. Dimitrijevic was in constant battle with the county exec when she served as board chair.

Larson’s headquarters at 2200 N. Martin Luther King Dr. is located in a spacious old bank building. The teller windows have Larson signs and crepe paper decorations. The place is strictly business, and a few healthy snacks like oranges and apples were the featured fare at this low budget operation. No money for beer on election night, for example.

Larson was outspent twenty to one by his opponent, and the Larson campaign organization had been shaken by several high-level departures. This generally does not augur well for a campaign.

As the ten o’clock hour neared, and the late news was about to begin, three correspondents from three television stations were poised under the lights and before the cameras ready to announce the results of the evening’s vote and the mood of the campaign. Just before the broadcast began, a cheer arose from the dozen or so volunteers as their candidate pulled ahead of Abele.

Earlier in the day a pundit suggested that a strong finish by Larson may paradoxically hurt him since it would energize Abele to increase his spending, suggesting that at some point the sheer volume of dollars will carry the day for Abele.

Also, the general election for County Executive in April will also have some bigger names than Chris Abele or Chris Larson on the ballot, since it is also Wisconsin’s Presidential Preference Primary. The turnout in April will be much larger than the 21 percent turnout Tuesday, which itself was double the projection made earlier by election officials. The election will also have what may still be a hotly contested battle for the Republican nomination. Odds are that most Republicans will vote for Abele over Larson; they have voted for Abele in the past since his defeat of Rep. Jeff Stone in a special election in 2011 to replace outgoing Scott Walker. Abele’s television campaign ads — a resource that Larson has not had so far — call him “Democrat Chris Abele,” even though the race is a non-partisan one, so he is not obfuscating his party identity. 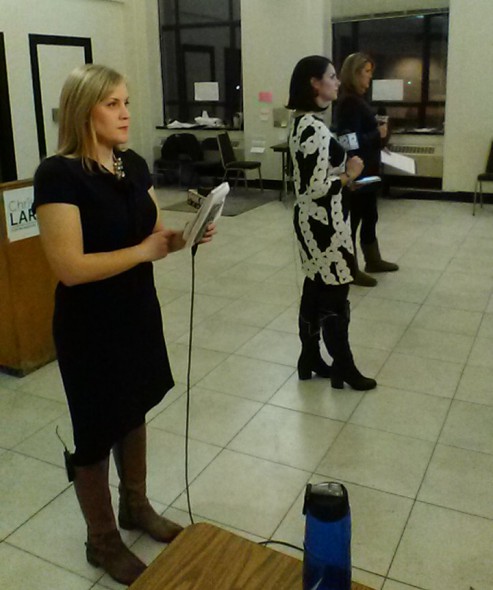 Ready to announce the results of the evening’s vote. Photo by Michael Horne.

Larson’s strength in the face of the Abele media onslaught, and the numerous Abele campaign mailings, points out that money does not always rule in politics.

The Larson campaign has stressed its grassroots strengths, and seems to have benefited from an anti-establishment movement from the left as seen in the emergence of insurgent Democratic presidential candidate Bernie Sanders, with whom there may be considerable overlapping support with Larson come April.

A half-hour after the event, the television stations were still running a scroll of the election results, interrupted by an Abele commercial. You can expect lots more of those ads to come.

A red-white-and-blue sign entitled “5 Rules For Winning Our Battles” outlined the campaign’s themes. Among them:

1.) “Prioritize .. Is it going to get us votes, volunteers, dollars or good press?”

3.) “Remember, our opponents are NOT perfect. But they aren’t idiots.”