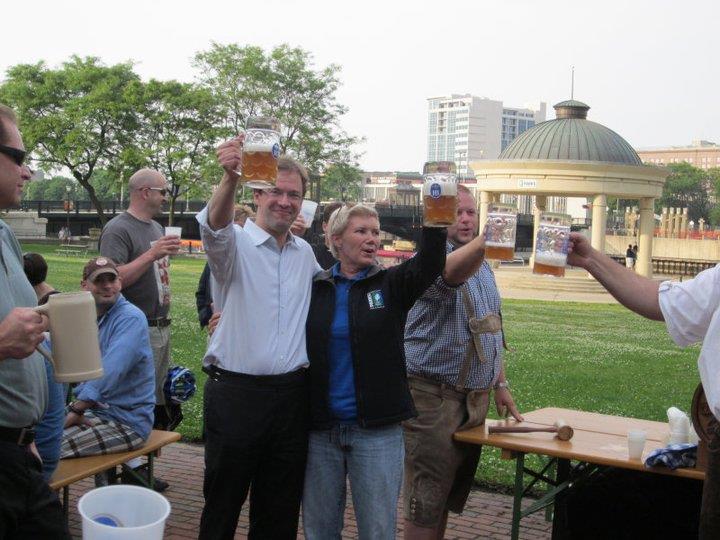 Abele “has no current or future plans to sell parkland,” says his spokesperson Melissa Baldauff. “Any such claim would go entirely against his past record during his time as County Executive to acquire and protect more parkland.”

But Milwaukee County Board members are not convinced and at Friday’s meeting of the Intergovernmental Relations Committee, its members unanimously passed a resolution that declares opposition to selling any of the 43 parks and instructs the county executive, Parks Department and Office of Corporation Counsel to seek the immediate rezoning of these parks by “the respective cities and villages where they are located.”

“There are dozens of parks properties that could be sold today by the County Executive without legislative oversight due to legislation he sought in Madison when he sold Park East land for $1 to the Milwaukee Bucks,” County Board Chair Theo Lipscomb said in a press release issued two days before the meeting. “Our parks are too important to be left to the whims of an executive who does not value them. Our park system is a legacy that we must protect for future generations.”

The 2015 state budget bill (Act 55) granted Milwaukee County’s executive the power to sell county land without board approval. Only property specifically zoned a park is exempt. But as it turns out, about 26 percent of total land in the county’s 156 named parks lack such zoning. Those parks comprise an estimated 3,932 acres, according to Preserve Our Parks president John Lunz, who testified before the committee.

That includes many of the county’s largest and most popular parks: Brown Deer, Doctors, Estabrook, Grant, Lake, Lincoln, Sheridan and Whitnall. Smaller but heavily-used parks also not zoned as parkland include Juneau overlooking the lakefront, downtown’s Cathedral Square and Pere Marquette Park and Milwaukee Rotary Centennial Park, recently created through the efforts of the Urban Ecology Center.

Paul Bargren, county corporation counsel, confirmed to the committee that land in all 43 parks could be sold, but added that he doubted that was “the intent” of legislation Abele succeeded in getting passed. Baldauff says Abele was not aware at the time of the discrepancy in zoning of these parks. The deal giving Abele more power over land sales than any county executive in the state was requested by him and approved by legislators with a key goal in mind: to make sure the county board couldn’t vote down Abele’s sale of county land to the Bucks owners (at a cost of just $1), who saw the land as crucial to their new arena development.

But several supervisors at the meeting said they were suspicious of Abele’s intentions based on his repeated efforts to sell downtown’s O’Donnell Park, originally to Northwestern Mutual, which the board voted down, and later through a proposed open-bid process for the park that the board also rejected. Supervisors also noted that Abele had gotten language placed in the state bill to specifically allow a sale of O’Donnell Park, which was not named but identified more stealthily based on the geographic boundaries of the park. That provision was eventually deleted from the bill.

Baldauff questions why the board is passing legislation demanding that Abele pursue the zoning change since the county executive has already written letters to the municipalities in question. But Lipscomb notes that Abele only wrote these letters on January 25, about two months after board members asked the Abele administration (on November 30) for “an informational report regarding the inventory of all County parks and parkland, and identifying their current zoning status.” Lipscomb charges that Abele’s staff delayed providing this information to the board “while they scrambled to send letters to the municipalities to look like they were on top of the problem.”

Baldauff says “the county executive is confident that the publicly elected mayors and village presidents of these municipalities, along with their respective legislative bodies, are more than capable of expeditiously making these changes regarding land under their control.”

But Dimitrijevic charged that as things stands now, deals could be made regarding any of these parks, which would be completely beyond the board’s purview. It seems “condescending” for the board to be asked to “just trust that everything’s going to be just fine,” she contended, given recent actions by the administration regarding parks.

John Dargle, director of the county parks department, told the committee his staff continues to vet the list of county park land, which includes more than 900 parcels “across the spectrum.” That includes land classified by the department as open space, floodway or agricultural land, and which is not listed on the county’s website, which only includes named parks. Committee members requested that Dargle provide more complete data about all parks-operated lands that could be subject to sale, including an acreage tally of named parks and other land, percentage of each park specifically in jeopardy and the zoning designation of each park or parcel).

Dargle explained that all municipalities have zoning codes but not all have “park” as a category. “For example, instead of assigning Park zoning, some communities use Conservancy, Agricultural, Floodway, or Institutional zoning districts for parklands,” he noted in a slide show.

Supervisors expressed surprise that Abele had not checked into zoning designations before pushing for a state law granting him broad powers to sell any land not zoned as a park. Baldauff says Abele believes “the apparent discrepancy on these parcels that are used as parkland but don’t have zoning to reflect that was likely an oversight from many years ago. The county executive is working with municipal leaders and their legislative bodies to make these corrections.”

But Lipscomb says there was no dereliction of duty on the part of any of the county’s 19 municipalities in how they had zoned parkland, some dating back many years: “Zoning of parks was not a problem for 100 years. The problem is that this executive has wanted, and was given, more power over these parcels despite their designation as parks.”

Dargle said that other factors could affect whether parkland could be sold or redeveloped. They include deed restrictions prohibiting usage other than as a park, conservation easements restricting future use, management agreements and leases, historical designations, environmental conditions such as wetland and floodplain regulations, and existing parks-and-open-space plans.

In addition to Lipscomb, others sponsors of the resolution to protect the parks are Broderick, Dimitrijevic, Haas, Pat Jursik, and Steve Taylor. Thus the resolution could have at least nine votes, enough to pass. That includes two supervisors who have advocated selling park land, Alexander and Taylor. The latter represents Franklin, which has the most public land at risk—possibly 800 or more acres, including portions of Whitnall, the county’s largest park and namesake of Charles Whitnall, “the father of Milwaukee County’s park system.”