Highway 41 and Lisbon Is a Mess

An ugly area with long lines of traffic getting off the freeway, it needs a serious fix.

Highway 41 is the freeway that travels north from I-94 and was recently renamed Wisconsin Highway 175. It runs only to W. Lisbon Ave., marking the end of a thankfully never completed freeway through the core of the city that was supposed to connect to the unbuilt Park West expressway. Milwaukee was largely spared the inner-city interstate overbuild that amputated and devastated Detroit, but in its wake left dozens of square blocks of barren land, hundreds of uprooted families and several ugly intersections. That includes this one.

I will describe the intersection as a driver going north on Highway 41 (from I-94) and reaching Lisbon to make a left turn. Highway 41 gradually diverges from a being a divided highway set in a trench to quickly reincorporating at grade into the city’s street grid. The incorporation is complete at the meeting with Lisbon Avenue (this is one block south of North Avenue – a direct east-west street). On the east side of N. 46th St. stands a line of duplexes and single family homes, and a small triangular parcel that is the home of Dave’s Gas. The northeast corner of the intersection is a handsome building that is home to Ralph’s Coffee which I recently discovered is not a coffee house at all, so if you want a good cup of coffee make a right and go to Bus Stop Coffee Shop. The north side of the intersection is an uninspiring, redevelopment-discouraging fast food chain – Wendy’s. Between N. 46th and N. 47th streets — a small undefined area that was probably filled in once planners realized the Park West was never to happen — is a former bank and an overgrown parking lot. The west side of 47th is much like the east side of 46th, pre-war frame duplexes, single family homes and brown brick retail buildings.

47th and Lisbon has the pleasure of being set in a neighborhood of retail activity, historic architecture and naturally heavy traffic and visibility. It’s a major urban gateway on Milwaukee’s West Side and one that holds a lot potential to redefine the way people enter it. Highway 41 is currently a convenient conduit into West Side neighborhoods and on into anywhere in the region thanks to the relative accessibility of our regional interstate highway network. You have relatively narrow lanes, existing sidewalk infrastructure, street trees, and harp lights already present in the area as well. It’s not the easiest place to walk around, but you can get through here without a car. That said, I would highly discourage going anywhere near here while on a bike. We should keep in mind we have an existing street grid and good urban fabric except where Highway 41 meets the city. These are all good traits for us to work with and should guide us to some design solutions.

The easiest part of every article – what doesn’t work! This intersection, like many in Milwaukee, is in a poor state of repair – creating unfortunately unpleasant travel. This condition is exacerbated by a convoluted, under signaled and confusing layout. Highway traffic entering this area comes to a relatively abrupt end from highway speeds to suggested city speeds. Lisbon is also a place where we see frequent backups of traffic, particularly during any rush hour. A good deal of our congestion stems from people attempting to make left turns on Lisbon, causing backups for blocks and blocks. If you are heading east on Lisbon and want to get onto Highway 41 south, you better have turned at Lloyd because you’re out of luck if you were expecting to make an easy left. The frustration of those backups leaves me with a memory of people blowing through recently turned red lights in an attempt to escape this jumble of streets faster. 47th and Lisbon in particular is just the byproduct of a familiar formula of impractical layout, unregulated speed, and lack of proper signage. 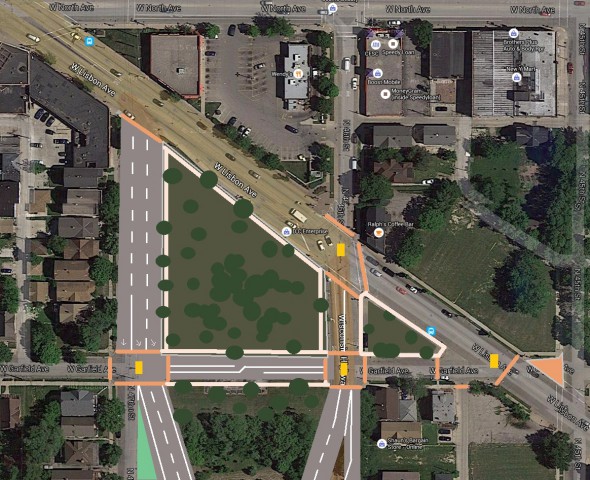 I always advocate simplifying the intersection, reducing speeds, improving walkability and relieving pressure from over-trafficked areas. While there are longer-term improvements I’d like to see. Let’s start with some quick remedies: I would reconnect Garfield between 46th and 47th, demolish the old bank building and turn that block into a small public square with minimal visual impairments for drivers. It could be a simple design of prairie grass, trees, natural plantings and bioswales. I would install a traffic light at Garfield and Lisbon with an exclusive left turn signal and signage directing drivers to Highway 41 by taking Garfield to 47th and making a left to enter the highway. Additional signage at 47th and Garfield would give instructions onto the highway as well. Traffic signals would be placed at 46th and 47th and Garfield. Two lanes of traffic would both enter and exit Highway 41 at Garfield. 46th and 47th streets would remain one way streets, and 46th would merge with the end of 41 with separate traffic signals for each (giving right of way to one or the other but not both at the same time).

47th and Lisbon would remain largely the same although 47th would be widened to three lanes and combined with the current highway entrance, reintegrating the homes on that block to the urban grid. Two lanes would be for drivers intending to enter Highway 41 and one would be for those to continue south onto 47th into Washington Heights. 46th would become a three-lane street between Garfield and Lisbon, with one lane devoted to turning left, a middle lane to go left or straight and a right lane to go straight. Highway 41 at Garfield and 46th would have two lanes allowing drivers to turn left, right or to go straight. It would be controlled by a different signal than 46th street which would also have the left, right or straight option. Right-turning traffic would be directed towards Garfield and Lisbon in order to take pressure off of 46th and Lisbon. I would use colored pavement at all pedestrian crossings and install crosswalk signage. I am refraining from insisting on any bike lanes or bump outs as this is an inherently tight space and it would be a better choice for bicyclists to take Lloyd or North (one block in either direction north-south of this junction).

Long-term, my ultimate vision is to see Highway 41 between Lisbon and Vliet converted into an at-grade boulevard with two lanes of traffic going in either direction lined with saplings and harp lights. Rather than being an underused asphalt trench, fill in the trench and reconnect Washington Heights to Olmstead’s masterful Washington Park with a street much like Lincoln Memorial Drive. Place traffic signals at Vliet, Washington and Lloyd and allow for the same traffic flow but in a far more scenic and controlled setting. I think this would drastically improve home prices in Washington Heights, bring more people into beautiful Washington Park and erase one of our physical legacies of segregation. There’s so much potential in our great city, if we pare back our roads, plant trees, and slow down a bit to enjoy it. Re-knitting this part of the city with Washington Park is among many steps we can make to create a more beautiful and integrated urban fabric.

24 thoughts on “Intersection: Highway 41 and Lisbon Is a Mess”