The Impact of New Development 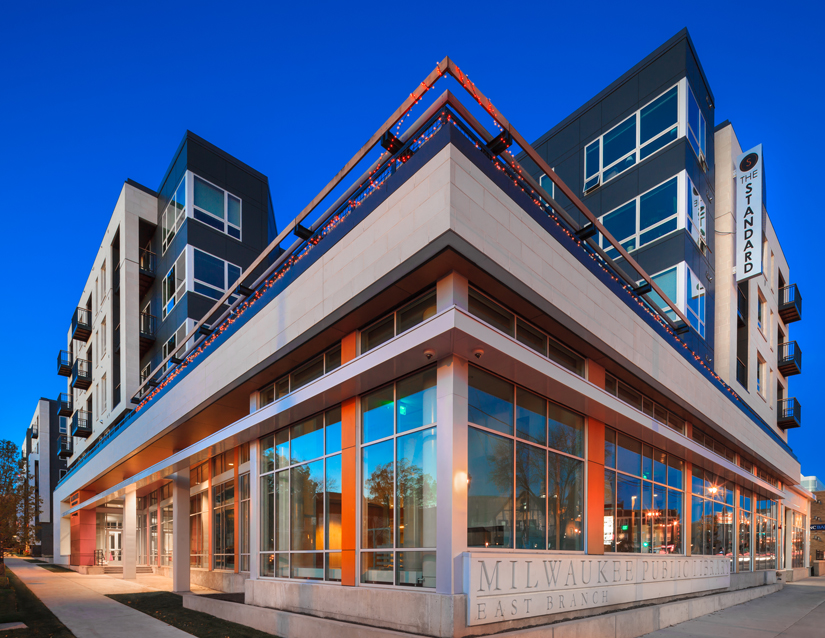 The Standard at East Library. Photo courtesy of the City of Milwaukee.

There’s no doubt Milwaukee is in the middle of a building boom. There are cranes on the skyline, construction cones at street level and trucks hauling materials every which way.

But what happens when the work is finished? Besides new residents moving in, besides the additional foot traffic, urban density and consumers of local restaurants and retail stores that are generated, all these new projects have a direct impact on the city’s bottom line, increasing the property tax base and spinning off added tax revenue.

To measure the impact of such development on the finances of local government, I conducted a survey of seven recently completed buildings in our growing buildings database. The net result? A collective annual property tax bill of $1,625,808.82. In aggregate that might look like a drop in the bucket compared to the total city property tax levy of $256.77 million, but when you look more closely at each project you start to see the huge impact on the city.

Take Sage on Jackson for example. A small apartment building that replaced an empty lot on the Lower East Side. A handful of neighbors opposed it, and local alderman Nik Kovac confessed that “I am in support of this project, although it is a close call,” during the project’s zoning hearing. It ultimately replaced a lot assessed at $55,300 with a building and lot assessed at $2.55 million, meaning the property value is now 46 times higher. Milwaukee Public Schools alone will receive in excess of $28,000 this year from that decision. That’s a lot of textbooks.

How about The Standard at East Library? The development that replaced the former East Library on E. North Ave. is a mixed-use development that includes a first-floor library. Previous tax revenue from that site? Zero, it was a government-owned lot. Tax revenue this year? $356,216.74. Should the city wish to use their share of the funds to purchase library books to fill the new library branch, they could purchase more than 12,000 copies of Fifty Shades of Grey from Amazon.

What about Dwell Bay View? The mixed-use apartment building is often chided for its design, but did you know that it pays more than enough in city property taxes — about $178,000 — to fund local alderman Tony Zielinski‘s salary and benefits? It dramatizes the direct, positive financial impact on local budgets from inducing more development. It also demonstrates that despite what one might hear in public meetings, renters clearly are property tax payers, just via their landlords.

True, new development alone won’t restore sagging local government budgets still recovering from the massive impact of the Great Recession and the foreclosure crisis. But the city, county, schools and other local property taxing bodies would be in a world of hurt without new development.

All of which underlines the need to structure sound public policy through zoning and other regulations that makes it as easy as possible to generate more new construction. If not-in-my-backyard (NIMBY) opposition makes proposed buildings shorter, smaller or prevents projects altogether, the end result can easily be thousands of dollars going to other municipalities annually as developers seek the path of least resistance.

Before digging into my building-by-building breakdown, a few quick notes.

What was it before? A largely underutilized lot on Bay View’s main street, S. Kinnickinnic Ave., as well as a couple smaller dwellings.

What is it now? Dwell is a mixed-use apartment building with 70 units, 85 parking spaces and first-floor retail (occupied by Snap Fitness, Community Bark, Rocket Baby Bakery and an insurance agent).

What was it before? A strip mall.

What is it now? A mixed-use apartment building targeted at Marquette University students with 80 units and first-floor retail space.

What was it before? A parking lot and home converted into a child care facility.

What is it now? Four buildings containing 31 townhouse-style apartments.

What was it before? An empty lot.

What is it now? A five-story, LEED-Platinum apartment building containing 20 rental units.

What was it before? The one-story East Library branch of the Milwaukee Public Library.

What is it now? A five-story, 99-apartment mixed-use building that includes one commercial space and a 16,000 square-foot condominium containing the new East Library.

What was it before? An empty lot following the demolition of electrical facilities from the former Pabst Brewery.

What was it before? A one-story, commercial building.

What is it now? A 75-unit (310 beds) apartment building targeted at Milwaukee Institute of Art & Design students with first-floor commercial space.

16 thoughts on “Eyes on Milwaukee: The Impact of New Development”