The city's zoning committee approves a building the developer promises will be super-green. 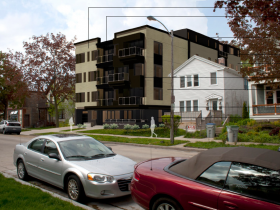 Bill Sellars, Owner of Nature Tech LLC, promises it will be the, “greenest building ever built of its kind in the city of Milwaukee or State of Wisconsin.” It will also be bigger than its zoning originally allowed.

The development in question, a residential building planned for 1509 N. Jackson St., is being built by Dominion LLC, with green technology provided by Sellars’ company. Dominion requested a change in zoning, from two-family residential to detailed planned development, which will allow for a five-story 20-unit apartment building to be built. That sounds a lot bigger, but the developer promises to set back the building so it doesn’t feel as big. The request won approval at the July 17th meeting of the Zoning, Neighborhoods & Development Committee.

The building will have a parking space for each bedroom, and a highly-efficient central heating system. The street facade material will be made of masonry, likely standard brick, with metal panels for the bays. Throughout the process the designs were altered to pull the building back from the street to match the neighborhood setback, and the fifth floor was pulled back 12 to 14 feet to hide the floor from view, so it feels more like a four-story building.

Sellars explained that to achieve its high standard of greenness, the building will incorporate geothermal technology, solar panels, and an engineered green building shell. It will also use locally harvested hardwoods throughout the building.

Although neither Dermond Property Investments’ 36-unit or Elan Peltz’s 14-unit apartment building proposed for this stretch of Jackson St. have broken ground, some residents are not happy about how the neighborhood is changing, and expressed opposition to the third new apartment building for the neighborhood.  Resident Judy Wick’s concern: “it’s the way that building and the other two buildings change the character of the neighborhood.” Delores Ploetz was more emphatic, declaring it “incomprehensible” that the city would allow a five-story contemporary building, and adding, “I think you’re destroying our small area.”

“I am in support of this project, although it is a close call,” said Ald. Kovac, whose district includes this neighborhood. That was enough for the committee, which gave unanimous approval to the requested zoning change. It will now go before the full common council for approval. 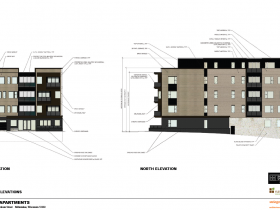 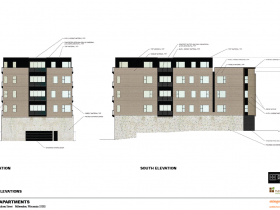 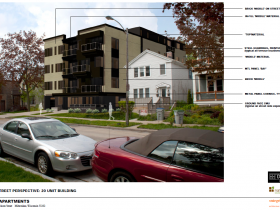 8 thoughts on “Greenest Building Ever Built?”