One of the key arguments repeatedly made in favor of destroying the Estabrook Dam is that it will cost significantly less than to repair it – in particular, if future operation and maintenance costs are factored into the cost analysis.

Fiscal prudence was cited by County Executive Chris Abele in his veto of a budget amendment that added $750,000 for a fish passage to be constructed as part of the repair alternative supported by the County Board. The higher costs for repair were similarly cited by the Milwaukee Metropolitan Sewerage District (MMSD), the Village of Shorewood, and the City of Milwaukee in resolutions supporting removal of the dam. But is it possible all are wrong?

The cost argument appears to have crystallized following the issuance in September 2014 of a draft Environmental Assessment (EA) report that included a capital and operating costs for what were identified as three feasible alternatives: repair with provisions for fish passage; dam removal; or construction of a rock ramp.  As no group seems to advocate the rock ramp alternative, the costs that matter (and were cited in a least a dozen articles in the Milwaukee Journal Sentinel) are the estimated $1.7 million for removal versus $5.1 million for repair (making the repair alternative exactly three times more costly). The costs for repair include $1.6 million for repair plus another $900,000 for construction of a fish passage plus $2.6 million for 20 years of operation and maintenance.

A slightly updated analysis of costs was presented in a summary of the EA prepared in February 2015 for submittal as evidence in the court case.

The estimated cost for repair has been further increased during 2015. In June, the estimate of capital costs for repair was increased by $627,000, in response to an updated inspection of the dam which found additional deterioration (since the date of the last inspection in 2010). Costs for the fish passage component have also increased from the $858,000 estimate submitted to the court in February.  Costs of $1.35 million were cited in a June 15th letter to the court; $1.107 million in an Environmental Impact Report submitted to the Wisconsin DNR on October 8th With no adjustments having been made in the estimate for removal, the repair alternative would appear to now be at least 3.5 times greater than removal.

One aspect of previous news coverage is that there seemingly has been no critical review (and very limited detail) provided regarding the cost estimates. Only one of 15 articles regarding the dam in the Milwaukee Journal Sentinel published between August 24, 2014 and May 18, 2015 bothered to break out the cost for construction of the fish passage separately from primary costs associated with repair of the dam.

The debate earlier this year over the costs associated with the proposed Milwaukee Bucks arena provides an example of the importance of understanding the assumptions underlying any cost estimate for a contentious, publicly-funded project. The cost estimates for the Estabrook Dam repair and removal alternatives were one of the first items to draw my attention in reviewing the EA.

As shown on the table above, a majority of costs attributed to the repair alternative are associated with long-term operations and maintenance (O&M) costs.  An estimate of $160,000 first appeared in the draft EA report published in September 2015. The O&M costs are a source of significant contention with members of MIlwaukee River Preservation Association, which cites $10,000 as the high end for annual costs based on an informal survey they conducted of other dam operators in Wisconsin.  The high costs appear to have been driven by several assumptions, the most important of which was that the county would have the equivalent of at least one full time employee assigned to monitoring the dam on a daily basis. The O&M costs as presented in Attachment 9 of the draft EA are provided below. 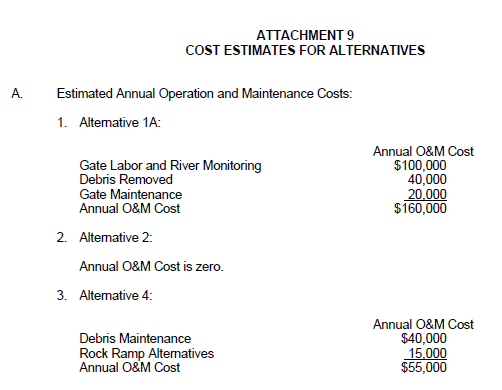 O&M costs for three dam alternatives (1A – Repair w/ Fish Passage; 2 – Removal; 4 – Replacement of Gated Section with a Rock Ramp) as presented in the draft EA.

The lack of detail here is striking given that this represents a majority of costs associated with the repair alternative, and also formed the basis (at least in part) for the resolutions passed by MMSD, the City of Milwaukee, and the Village of Shorewood.  No narrative or footnotes were provided in Attachment 9 of the EA regarding the basis for the O&M costs, but all appear to be approximate costs rounded to the nearest $5,000, 10,000 or $20,000.

In the revised cost estimate submitted by the county to the court in June 2015, the total O&M costs have remained the same, but the composition of the costs changed and as summarized below.

Based on the inclusion of item 4, the cost is probably more accurately described as an estimate of annual Operation, Maintenance, Monitoring and Repair (OMM&R) costs.

The need for a full-time employee warrants a greater level of critical analysis. So does the $50,000 estimated annual cost for debris removal, which arguably is a cost that would be shifted to other local governments if large floating debris that is now captured in part behind the spillway was instead carried downstream into the navigation channels heavily used by recreational boaters in the downtown and Milwaukee Harbor. As the O&M costs may be the key remaining issue in the next court hearing (now scheduled for June 2016), the public would benefit from further scrutiny of the key assumption related to O&M costs.

It’s also worth noting (and hasn’t been reported) that the county has established a maintenance trust fund for the dam that receives $51,000 in rental income per year from television towers located in Lincoln Park, and which will have a balance of over $300,000 by 2017 when dam operations could resume.

While the arguments related to costs for O&M (or OMM&R) relate to costs that are included in current cost estimates, other arguments relate to costs that are currently excluded from these estimates. For the repair alternative, examples of additional costs that are currently excluded from the primary cost estimates could include: (a) interest on capital costs (if money is borrowed by the County to complete the repairs), (b) future major costs (not covered by the $30,000 per year for repairs now included in the OMM&R budget), and (c) the costs for flood insurance (more on this issue in the next installment).

For removal, some examples of potential costs excluded from the current $1.7 million dam removal estimate include: (a) costs for Glendale to modify at least 30 stormwater outfalls that discharge to the Milwaukee River that are designed for the higher water level associated with the impoundment; (b) costs for private landowners to repair dockwalls and removal docks and other boat infrastructure; and (c) costs for environmental restoration of land formerly covered by impoundment waters but now exposed.

The former Woolen Mills Dam on the Milwaukee River in West Bend (removed in 1988), is actually presented in one of the reference documents cited in the EA as an example of a dam where the removal cost was estimated at $82,000, but where an additional $2.3 million was eventually spent on restoration costs (including “engineering design, grading, seeding, channel work, fisheries improvements, construction of a new bridge, and development of a park over 61 acres of the former impoundment”). The repair cost had originally been estimated at $3.3 million or 40 times the cost for removal, while the final cost differential ended up being only 1.4 times greater cost for repair than for the full removal project (including restoration).

In short, the excluded costs of the dam removal option would appear to warrant further public scrutiny.