One of the most contentious issues in terms of excluded costs is the potential decrease in the value of waterfront properties that could result from removal of the dam, and the resulting permanent loss of property owners to the pool of water formed by the impoundment. This type of concern by waterfront property owners is not unique to the Estabrook Dam impoundment. In a 2003 study by Helen Sarakinos and S.E. Johnson of “Social Perspectives on Dam Removal” they note: “The impact of dam removal on adjacent property values is often of great concern.  Riparian landowners, who often view their property as “lake frontage” rather than “river frontage,” fear their property values will decline with the loss of the dam and the impoundment.”

The potential for significant decreases in property values if the dam is removed has been cited as a major concern by owners of property bordering the Estabrook Dam impoundment since at least 2008. It is noteworthy that the impact of the impoundment on property values was acknowledged as a significant issue at the time of dam construction, with an engineering report dated 1937 noting ”When the rock ledge or barrier through Lincoln Park and Estabrook Park has been completely removed, the water level upstream will drop to such an extent that all swimming, boating, and recreational facilities of such type will be eliminated, unless a dam is built to maintain the water level at its previous ordinary level, and the riparian owners would have grounds for damage suits unless this were done”  (emphasis added).

As the Journal Sentinel reported on September 9, 2014, the Milwaukee River Preservation Association has claimed the decrease in the value of properties bordering the impoundment could be as great as $21 million if the dam is removed, and that this amount could be sought by the property owners as damages in a future lawsuit if the county proceeds with removal.  Using a tax rate of 2.7 percent, this could represent an annual loss in property tax revenue of $567,000 (and a cumulative loss of $11.2 million over the first 20 years). The potential for decreases in property values and property tax revenues is noted in the EA, but dismissed as unlikely: “Removal of the Estabrook Dam is expected to have little impact on property values in the area surrounding the existing water way and current impoundment…

In supporting this assertion, the EA references several studies, but in particular a study performed by UW-Madison researchers Bill Provencher, Helen Sarakinos, and Tanya Meyer, “Does Small Dam Removal Affect Local Property Values? An Empirical Analysis.” The study was performed on properties located on or near 10 current or former dam impoundments in south-central Wisconsin, as well as four additional segments of free-flowing rivers.  My review of the study found that only six of the sites studied were former impoundments where dams were removed, and four of these were located in small rural towns with fewer than 350 residents (the only exceptions being two impoundments located in Baraboo [population 10,000]).  Only two of the former impoundments were larger than 30 acres in area, and one of these (the Rockdale Dam in Baraboo) had a maximum depth of only 5 feet and an average depth of 1.7 feet (and was therefore limited value for motorized recreational boating). Remarkably (given the study’s stated goal of evaluating the effects of dam removal on property values), of the 773 properties evaluated, only 116 were waterfront properties, and of these, only 6 were properties located on a former impoundment where a dam had been removed.

The study acknowledges this shortcoming and states “The most obvious weakness of the data is the lack of frontage observations at removed sites.”   Another confessed weakness that makes its findings questionable when applied to the Estabrook Dam is this: “Some caution is necessary in interpreting the results.  The conclusion that free-flowing rivers confer a price premium is likely due to the small size of the impoundments at our study sites. The conclusion should not be extended to large impoundments where activities such as fishing, boating, and swimming are especially attractive” (emphasis added).

The EA also referenced a second study to argue the impact on property values will be minimal, the aforementioned “Social Perspectives on Dam Removal” by Helen Sarakinos, Helen and S.E. Johnson, and made this overall conclusion: Although little research has been focused on assessing the impacts of dam removal and loss of impoundment on property values, preliminary studies have indicated that riparian property values (after dam removal) have remained unchanged or decreased temporarily with a rebound within 2 years. After 10 years, property values showed no difference from the value prior to dam removal.”

As this is such an important issue and data on it is so scanty, I thought the Mequon-Thiensville Dam might provide more current and relevant data on the impact of an impoundment on waterfront property values in the Milwaukee area.  The Mequon-Thiensville Dam has the advantages of being located on the same river and in the same metropolitan area as the Estabrook Dam, as well as having a large (700-acre) impoundment that is extensively used by local residents for boating and other recreational activities.  Using assessment data available on Ozaukee County Geographic Information System (GIS) Portal and the land records system, I examined the values for a continuous 1-1/4 mile section of Parkview Avenue that contains 52 residential properties of similar size and all having frontage on the Milwaukee River. Thirty of the properties are located downstream of the dam (at addresses of 5610 to 5718 W. Parkview Drive and 11205 to 11601 N. Parkview Drive). Twenty-one homes are located upstream of the dam (at 4716 to 5518 W. Parkview Drive). I excluded from analysis the property that includes the south end of the dam. The results are summarized below. 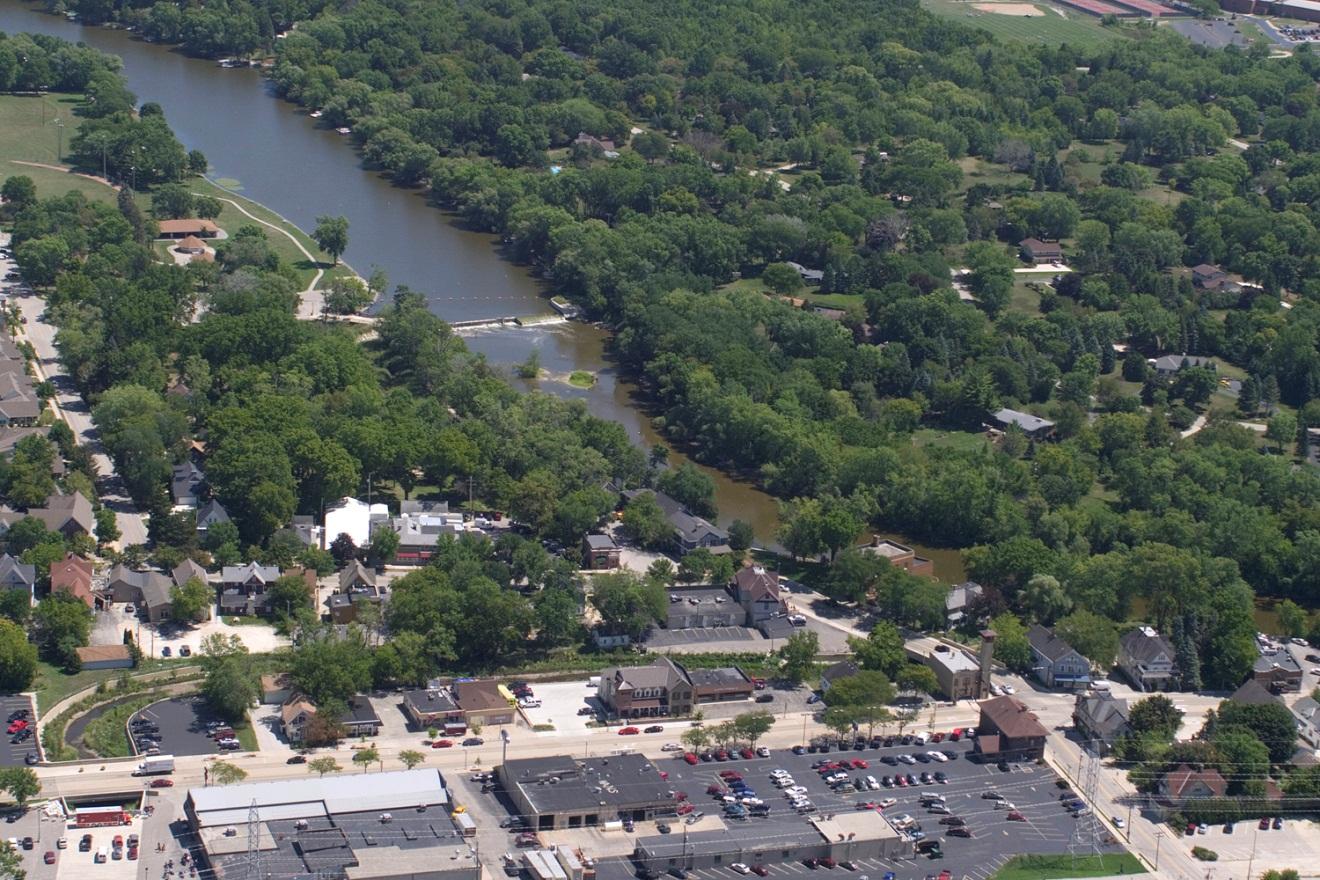 With the data set limited to houses in the same neighborhood, on the same street, in the same school district, it is difficult to attribute the difference in values to anything other than a higher value associated with having access to the recreational amenity provided by the impoundment. Whether these results can be applied to homes bordering the Estabrook Dam impoundment is subject to debate, but the data is arguably more applicable than 13-22 year old data for dams in small rural towns in south-central Wisconsin.  Applying the $65,630 per lot premium in Mequon to the 163 residential waterfront properties reportedly bordering the Estabrook Dam impoundment would result in an estimated potential reduction in property values of $10.7 million if the dam is removed and the impoundment eliminated. At a property tax rate of 2.7 percent, this would represent a potential loss in property tax revenues of $288,438 per year.  Applying the same 20-year period used for calculating long-term O&M costs for the dam, this would equal a cost to local governments of $5,776,750 in lost property tax revenues.The assessment data for the Mequon-Thiensville Dam (which is the nearest location on the Milwaukee River with an impoundment that can be used by motor boats) suggests there is a significant premium for riverfront parcels with access to the impoundment versus those downstream of the dam with water depths not suitable for boating. For the section of the river lying upstream from the Mequon-Thiensville Dam, this premium is equal to approximately $65,630 per lot, $74,188 per acre, and $579 per foot of frontage on the River. Separate from the increased value of the lots, the homes built upstream of the dam have average values that are $70,647 greater than homes downstream of the dam (averaging $247,943 in assessed value versus $177,296).  This premium appears to be driven in part by the replacement in the last decade of several smaller homes by larger new homes on the impoundment valued at $300,000 to $600,000.  Therefore, having an impoundment over the long-term also seems more likely to result in “tear-downs” and replacement of low or moderate value older homes with much higher value new homes – further adding to the property tax revenues attributable to the presence of a boat-able impoundment.

With the continuing revitalization of waterfront areas in the cities of Milwaukee and Glendale, and completion of the sediment cleanup, there would seem to be significant near-term and long-term potential for further increases in the values of waterfront properties in Glendale. While my total calculated potential decrease in property values of $10.7 million falls short of the $21 million in potential losses claimed by MRPA, my calculation did not include any of the commercial properties on the impoundment, such as the Holiday Inn Milwaukee Riverfront and Anchorage Restaurant at 4700 N. Port Washington Road, which overlooks the dam. The new owners of this property are reportedly advocates for keeping the dam, and invested almost $20 million in 2014-15 in purchasing the hotel and in completing extensive renovations. This major private investment was launched at a time when the county’s stated plan was to repair the dam. Plans by the owner to develop a boat dock have reportedly been put on hold pending resolution of the lawsuit.

If costs are to be cited as a primary consideration by the Milwaukee Common Council, MMSD, and others in support of removal the Estabrook Dam, then the assumptions related to O&M costs should be given closer scrutiny.  So, too, should the fact that studies referenced in the EA to conclude there would be no significant decrease in property values if the dam is removed appear to have almost no relevance to the Estabrook Dam impoundment.  Furthermore, a true analysis of the relative costs of removing versus repairing the dam should consider that an analysis of data for select properties on what is potentially the impoundment on the Milwaukee River with the greatest similarity to the Estabrook Dam impoundment shows riverfront properties with access to that impoundment were on average worth approximately $65,630 per lot, or $74,188 per acre, more than properties without such access. If similar valuation differences would hold true at the Estabrook Dam, then the total cost for removing the dam could increase by $15 million or more, resulting in the cost for the removal alternative being three times rather than one-third the cost for repair. In effect, all these factor would result in a complete reversal in the relative costs, making repair by far less costly for the taxpayers than removal of the dam. 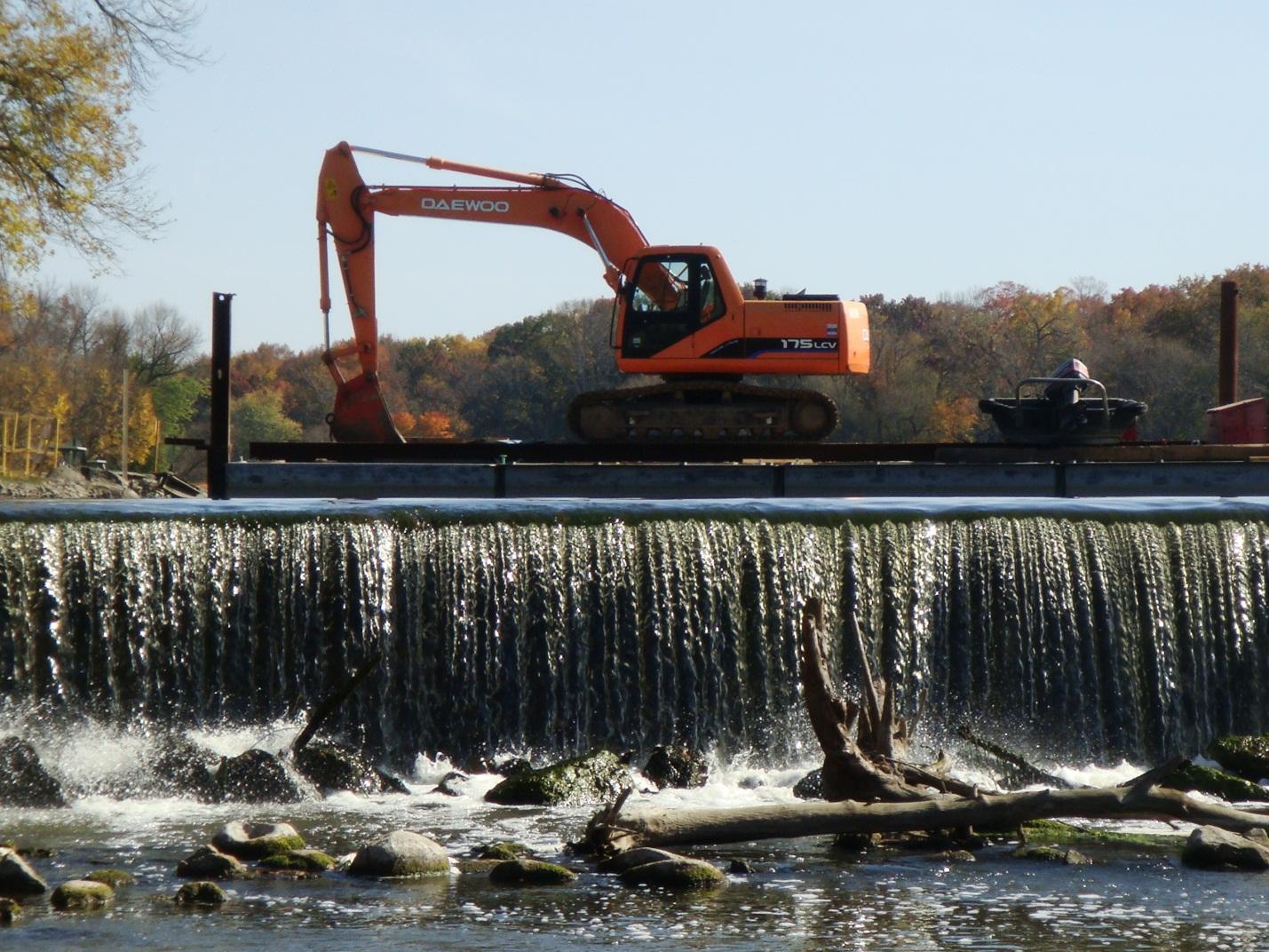 View of repairs in progress at the Mequon Thiensville Dam in 2010.

Coming next: Which option for Estabrook Dam is best to handle flooding?