The impact on flooding is perhaps the second most frequently cited reason for supporting removal of the Estabrook Dam rather than repairing it.  As noted in Part 2 of this series, flooding problems occurring in this area were in part responsible for a state law enacted in 1931 which included flood mitigation measures and led to public works projects completed during 1933-40 that included construction of the Estabrook Dam. Today, the neighborhoods bordering the north end of the Estabrook Dam impoundment still contain the largest number of homes subject to flooding of any area in Milwaukee County. Although the dam was constructed as part of a flood control project, removal of the dam would potentially reduce flood levels in the flood-prone area. The benefits from lowering the water level would include reduced occurrence of flood damage and elimination of flood insurance requirements for certain homeowners affected by rare, 100-year floods.

But my own review of the modeling data used to predict water levels after removal of the dam suggests as few as 10 homes might as a result see reduced flooding levels. Moreover, the modeling data might be wrong: an actual 200-year-flood in 1997 did not result in flooding at levels as high as those predicted by the model. Finally, there has already been some spending on a flood mitigation program that might address this issue and whose effects have not been taken into account by those advocating removal of Estrbrook Dam. 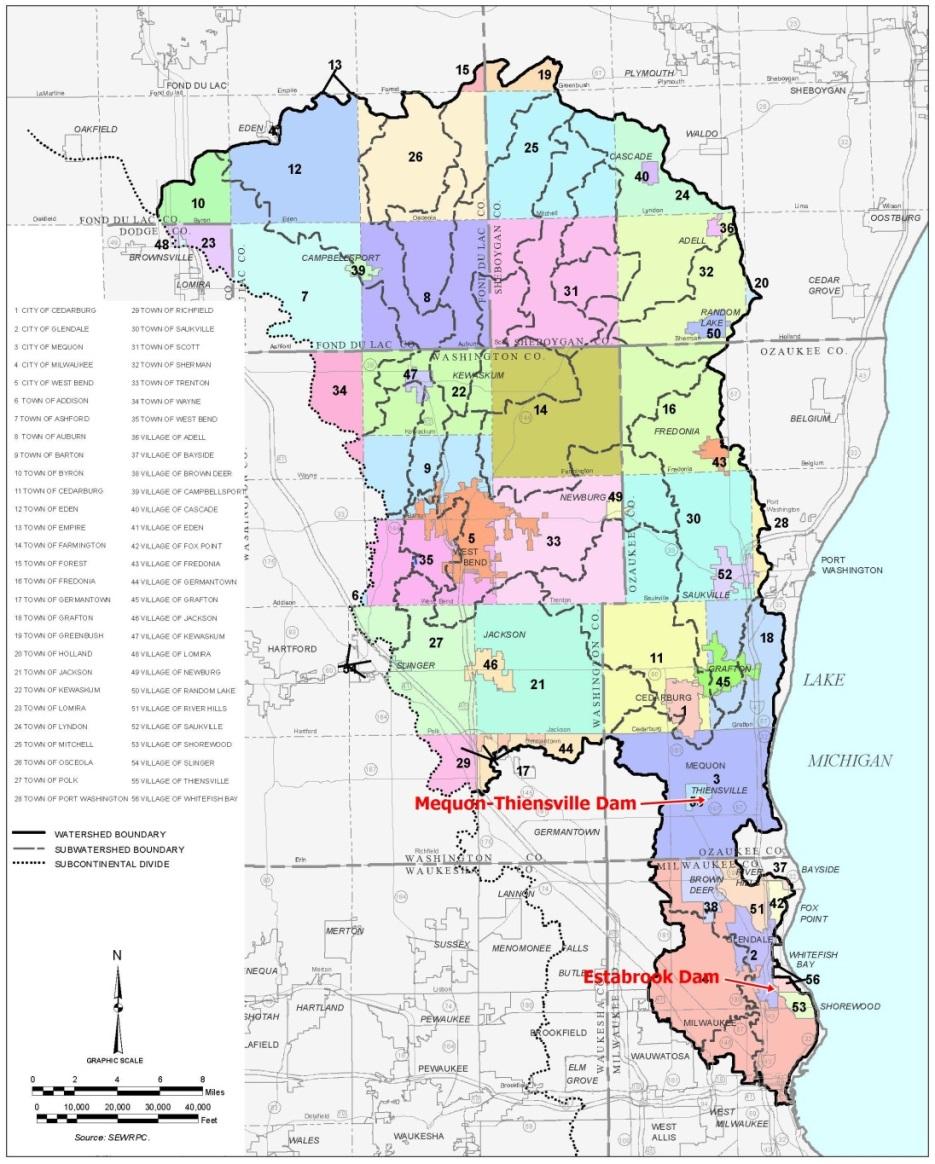 Map of the Milwaukee River Watershed (from SEWRPC, 2010) 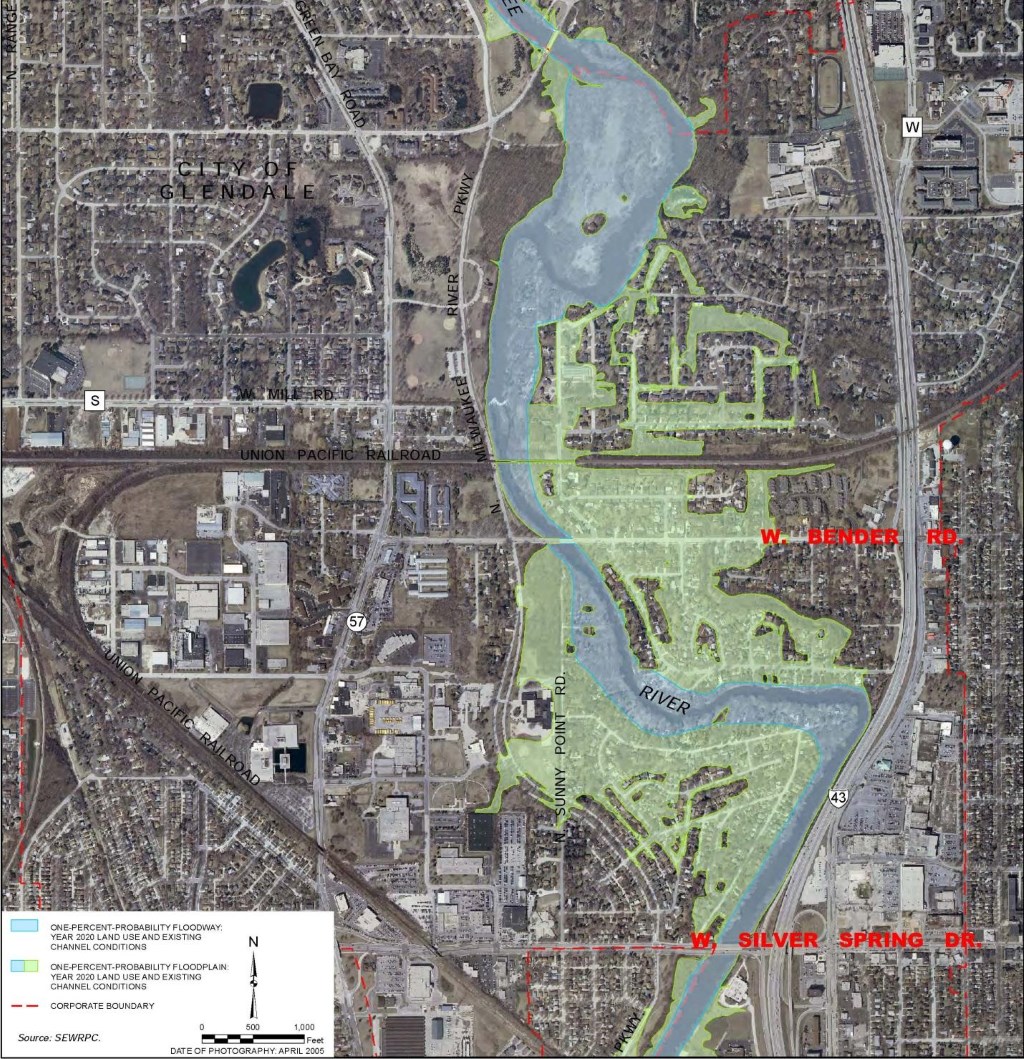 100-Year Flood Map for the northern portion of the Estabrook Dam impoundment, extending to approximately West Bender Road (modified from SEWRPC, 2010). The map was modified to both highlight the locations of W. Silver Spring Drive and W. Bender Road. 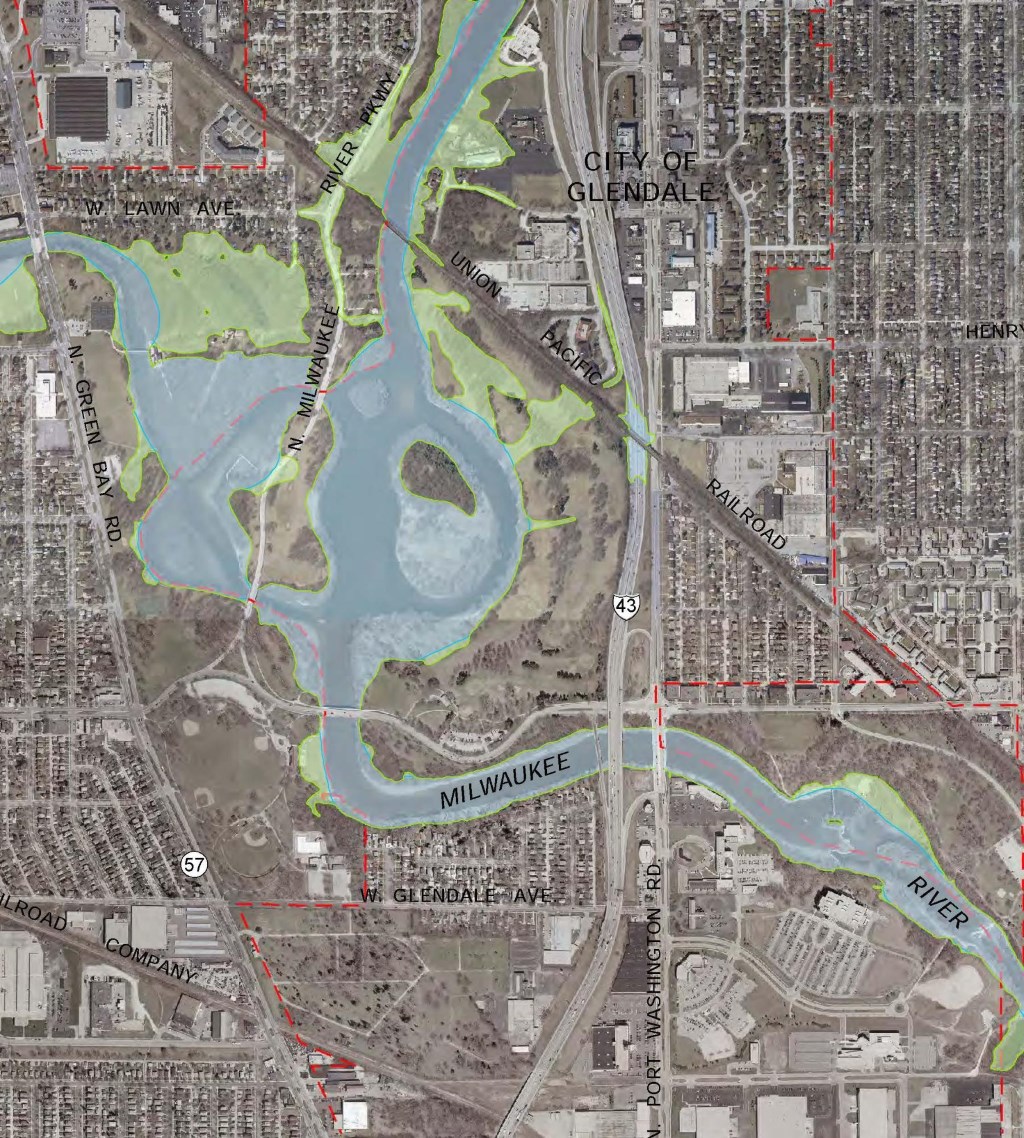 100-Year Flood Map for the southern portion of the Estabrook Dam impoundment (from SEWRPC, 2010).

As part of the Environmental Assessment (EA) for the dam completed in 2014-15, hydraulic analyses were performed by SEWRPC on five dam removal or repair alternatives. The purpose was evaluate the effects of each alternative on water surface profiles under normal conditions (the long-term median and mean flows over the past 100 years) and for flood flows at 10 percent, two percent, one percent or 0.2 percent of the time (or every 10, 50, 100, and 500 years).

The modeling used the U.S. Army Corps of Engineers river analysis system computer program. The hydraulic model used as the starting point was the same used for federal flood insurance and local zoning purposes as described in the September 26, 2008, Federal Emergency Management Agency (FEMA) flood insurance study for Milwaukee County. The model was updated by SEWRPC for the dam evaluation by incorporating “bathymetric data” (i.e., elevations of the bed of the river) obtained as part of the sediment removal projects.

The removal alternative was modeled assuming that the Estabrook Dam structure would be removed in its entirety. The modeled water levels were reported for approximately 140 locations along the Milwaukee River and the lowermost 1.17 miles of Lincoln Creek (which is influenced by flood levels in the adjoining portions of the Milwaukee River).

The most relevant data to the repair/removal debate are the flood levels modeled for removal of the dam, and the difference between these levels and the modeled water levels if the dam is repaired and remains in use.  The table below summarizes the modeled water levels at four key reference locations on the River – at the dam, and at the crossings for Hampton Ave., Silver Spring Dr., and Bender Rd.  Silver Spring Dr. is significant in that it represents the approximate southern limit of the area where homes bordering the impoundment are located within the 100-year flood zone. Bender Road marks the extreme northern limit of the Estabrook Dam impoundment. North of Bender Road are approximately 80 homes subject to flooding, but which would not be impacted by either dam alternative in terms of modeled future flood levels.

The most significant results are the modeled decreases in water levels that would result from permanent removal of the dam, which are shown in the lower third of the table. Key observations:

The manner in which the flood modeling data have been presented to date appears to have contributed to significant confusion among the general public as well as local officials regarding the actual magnitude in the reduction of flood levels that might result from dam removal, as well as the number of homes that would experience reduced flood levels and/or be freed from federal flood insurance requirements. Although the model suggests that reductions of between 0.32 and 0.03 feet would occur in the elevation of water during a 100-year flood in the area between Silver Spring Dr. and Bender Rd., it is unconfirmed in the studies published to date whether any homes would in fact be removed from the 100-year flood zone (and the associated flood insurance requirements).

Although slight reductions in flood levels are modeled to occur, the magnitude of the rise in water level during a flood event would be nearly the same with or without the dam. Assuming the starting point for a rise in water levels occurring during a flood event was the river level associated with median flow, at Silver Spring Dr., the water level during a 100-year flood would rise from 616.98 to 625.07 feet amsl (an 8.09-foot increase) with the dam, and from 613.58 to 624.76 feet amsl (an 11.18-foot increase) without the dam. The peak elevation of flood water is modeled to be lower without the dam, but would by reduced by only 3 to 4 percent relative to the overall rise in flood waters that would still occur. At Bender Rd., based on the model, the magnitude of rise in flood waters during a 100-year flood would decrease by about 0.2 percent if the dam is removed.

Assuming that a 2 percent reduction on average occurred in the maximum flood elevation in this area of Glendale if the dam is removed, the shrinkage of the 100-year flood plain and the number of homes removed from this area might be expected to be a similar small percentage. My best guess is that 10 or fewer homes might be freed from federal flood insurance requirements if the dam is removed. As evidence of the confusion that currently exists regarding the impact of dam removal on flood levels, I received a communication from the City of Glendale on June 12th that noted: “If the dam is removed, then hundreds of Glendale homes that are listed as ‘floodplain’ will be able to petition to remove flood insurance requirements.” This is almost certainly not correct, and is potentially off by a factor of 20 or more.

The confusion has been exacerbated by seemingly inaccurate information presented by some advocates for removal.  An example from the Milwaukee Riverkeeper website: “While the number of affected homes in the impoundment has been stated as around 300 during public meetings, the vast majority of those homeowners would like to see the dam removed due to flood risk posed by the Dam and the requirement to purchase expensive flood insurance due to Federal FEMA regulations.” The implication of this statement seems to be that the dam impacts the flood insurance requirements for hundreds of homes and those homeowners would benefit from dam removal and reduced flood levels, which is almost certainly incorrect.

11 thoughts on “A Freshwater Controversy: Does the Estabrook Dam Cause Flooding?”