Although Glendale concurred with the recommendation (including removal of 19 of the most flood-prone homes within the Sunny Point Peninsula area), the city’s support was conditional on the program being voluntary, fully funded, and giving greater consideration to flood proofing or raising the elevation of structures as an alternative to demolition in areas outside of the Sunny Point Peninsula. I was unable to confirm the current status of the flood mitigation program, other than that some homes within the floodplain have been purchased and others raised above the modeled flood elevations. Although details do not appear to be readily available, a key takeaway appears to be that a flood mitigation program is already in progress to address all homes and businesses within the vicinity of the impoundment that are currently mapped as being subject to a 1 percent probability of flooding.

One of the remarkable details included in SEWRPC study is information provided by the City of Glendale on flood damage associated with a flood on July 21, 1997 with a peak flood flow of 16,500 cubic feet per second (cfs). This flood was noted in the SEWRPC report to be the largest flood recorded in the 94-year period of records for the United States Geological Survey gage to that date, and was estimated to have an annual probability of occurrence of 0.5 percent, or every 200 years. In spite of the magnitude of this flood, the city reported that no residences experienced significant flood damage (as defined by FEMA), and that 128 residences sustained minor damage with combined total damage estimated at $150,000. The city reported additional response costs and damage to public structures of $255,000. The combined total damages of $405,000 appears to have included damage attributable to indirect or localized street flooding, as well as any direct flooding associated with overflow of the Milwaukee River.

The relative lack of reported damage from a 200-year flood event is notable indeed given that at least 71 structures in Glendale are modeled to be within the 10 percent probability of flooding — at risk of damage from a far smaller 10-year flood event. Based on the analysis performed by SEWRPC in 2014 for the Estabrook Dam, flood levels modeled for a 100-year event are from 2.90 to 4.95 feet higher than those for a 10-year event for the section of the River between Silver Spring Dr. and Bender Road. Thus the 71 structures within the 10-year flood area should have been inundated by at least 3 to 5 feet of water during the 200-year flood event of 1997.

Based on the very limited damage reported from the 1997 flood, there appears to a discrepancy between actual flood levels during a major flood and those predicted by the SEWRPC model, which leads to additional questions regarding its ability to accurately predict the impacts if any from the Estabrook Dam.

In conclusion, studies performed by SEWRPC suggest that in an area north of Silver Spring Dr. and south of Bender Rd., removal of the Estabrook Dam would result in reductions of between 0.32 to 0.03 feet in the modeled 100-year flood elevations. If the modeling is correct, the dam’s removal results could result in an undetermined (although likely small percentage) of homes being removed from the official 100-year flood boundaries (and thereby relieved of associated flood insurance requirements). My guess is that fewer than 10 homes might be affected. The lack of specifics on the number of homes impacted appears to have led to significant misunderstanding by some property owners as well as public officials regarding the impact of dam removal on reducing flood levels.

Furthermore, the modeled flood impacts may be exaggerated versus the actual flood impacts, given a 200-year frequency flood event in 1997 reportedly resulting in $405,000 in combined flood damages/expenses in Glendale – an amount that is only about 3 percent of the damages predicted in the 2010 SEWRPC study for a lesser 100-year flood event.  Therefore, the actual flood reduction benefits from removal of the dam could be substantially lower than the already limited impacts predicted by modeling.

Finally, the impact of dam removal on current plans by MMSD to address all structures in this area subject to a 100-year flood has also not been detailed. Presumably, the small group of homeowners that might be freed from federal flood insurance requirements as a consequence of removal of the dam might see the same or better result from the MMSD project, including a higher level of protection from an actual flood event, as well as localized flooding unrelated to the Milwaukee River or Lincoln Creek.

The flood of July 22, 2010 is worth reviewing in this context. Thousands of homes in the Milwaukee area were flooded on this date, including hundreds of homes in the area surrounding Lincoln Creek. But the flooding in neighborhoods bordering Lincoln Creek was reportedly not caused by overflow of the creek banks but instead by localized flooding of streets. Residents who were freed from flood insurance requirements as a result of the $110 million Lincoln Creek flood mitigation project completed only eight years earlier suffered devastating losses from flooding, with some homes a total loss and subject to demolition. Glendale experienced significant flood damage, but most appears to have been associated not with overflow of the Milwaukee River, but with localized flooding such as that which resulted in a $12.9 M property insurance claim by Nicolet High School.

The recent hydraulic modeling performed in support of the EA for the Estabrook Dam presented an opportunity for an important community dialogue to take place regarding flood issues in Glendale, including the assumptions and limitations associated with the hydraulic modeling, the flood risks posed by the Milwaukee River versus flooding of streets or from sewer backups, and the status of flood mitigation efforts in progress.  Unfortunately, this opportunity has not been taken advantage of, and the debate regarding the dam appears to have decreased rather than increased public understanding regarding the flood issues in this area.

Confusion related to models is reportedly a common issue in dam removal/repair decisions, as noted by William Steele during his keynote address at The Heinz Center’s Dam Removal Research Workshop October 23–24, 2002, as published in Dam Removal Research: Study and Prospects:

“The major challenge for the scientific community is to protect against the misuse of models by its members or by decision makers.  Transparency and effective communication about the assumptions and uncertainties that may be embedded in the models are both difficult and important. Often, the language of modeling is extremely obscure to the lay public, and thus caveats that seem clear to the scientific community are completely lost in the din of public debate. Modeling becomes a tool of misinformation as much as a tool of useful information.” 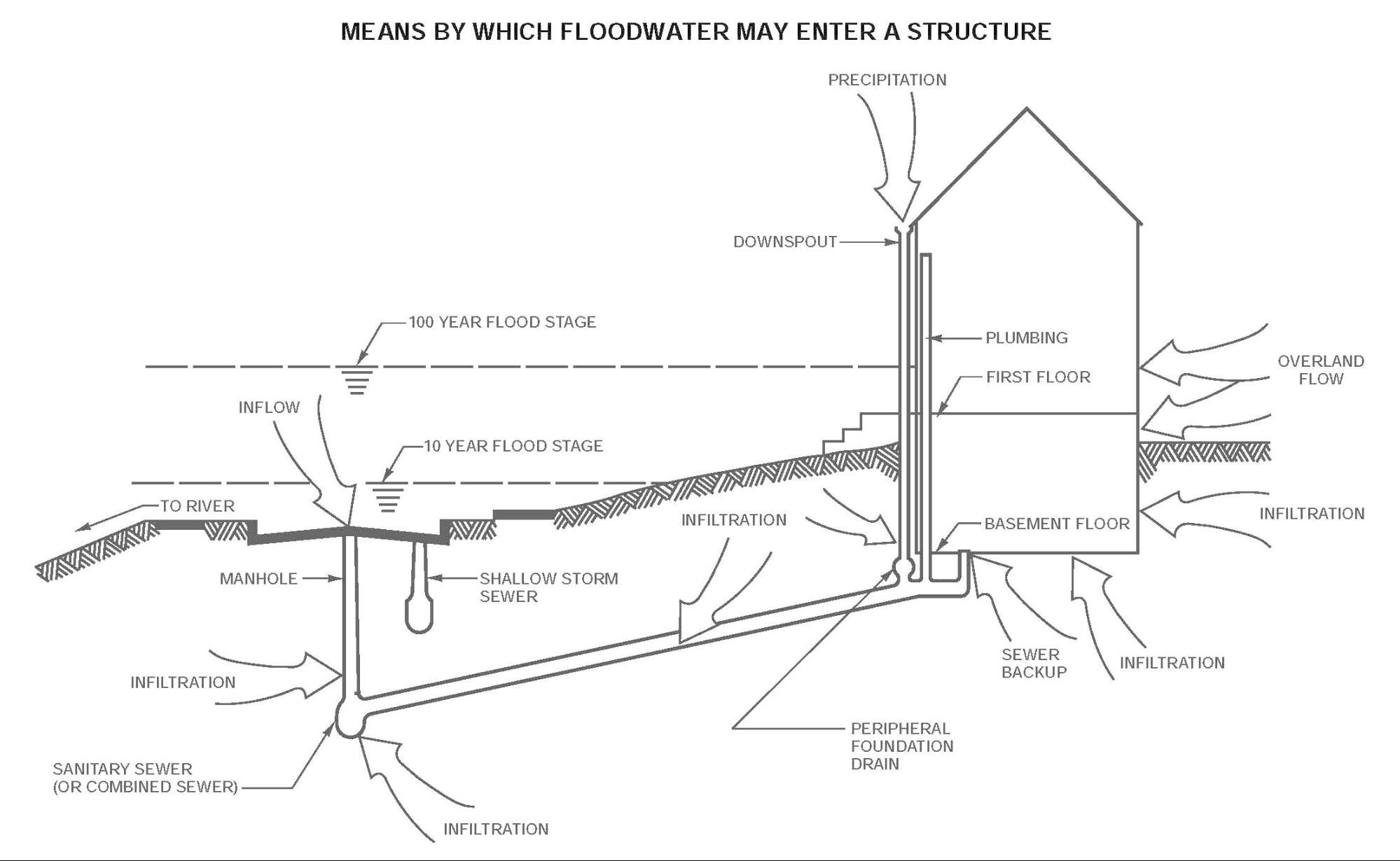 Drawing from SEWRPC (2010) illustrating the many means by which floodwaters can enter homes, including overflow of rivers, overland flow, infiltration from elevated groundwater levels, and sewer backups.

As the diagram above demonstrates, flooding of homes can occur from many causes. It’s entirely possible the removal of the Estrabrook Dam will have little impact on flooding. There is still time for the community to fully discuss this issue and choose the best and most cost-effective way to prevent flooding.

11 thoughts on “A Freshwater Controversy: Does the Estabrook Dam Cause Flooding?”