Plus: new coffeehouse in Third Ward, and new burger joint in Cudahy. 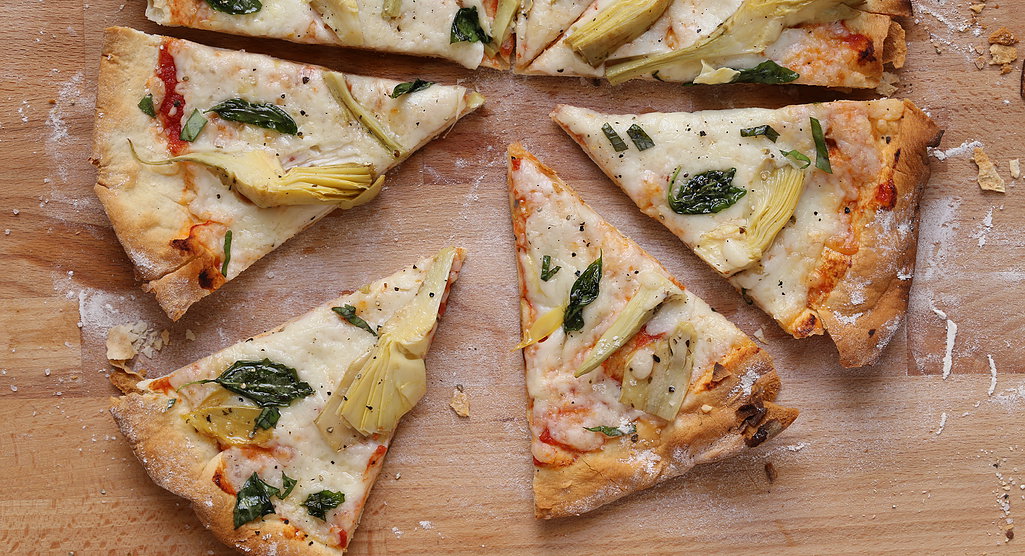 The bad news: The Strada Pizza Company, which opened last February at 2301 S. Howell Ave. in Bay View has closed, after barely a year of service. The good news: the pizza void was filled almost immediately. According to a notice on Strada Pizza’s website, they were bought out by Lombardi’s Restaurant & Pizzeria, which opened in the space on Monday. The new place feels like Strada redux, but renamed.

From the menu, we can see that Lombardi’s will offer the same kinds of items offered by Strada with some new options. Items include full pies, New York slices, calzones, strombolis, pasta, salads, sandwiches, boneless wings and more. Pizza pies range from more traditional ones like the Lombardi’s Pie, with fresh mozzarella, red onions, red roasted peppers and green olives; to more experimental ones such as the Bacon Cheeseburger and the Stuffed Spinach and Feta. Mangia.

Could there be too many coffeehouses in the Third Ward? Nah.

Back in June, we reported that Kickapoo Coffee Roasters will be heading to the Historic Third Ward in the fall. This Saturday at 7 a.m., Kickapoo Coffee Roasters will be holding their grand opening at their location at 232 E. Erie St., according to Milwaukee Magazine. Manager Scott Lucey and owners T.J. Semanchin and Caleb Nicholes will be revealing the espresso menu along with a small menu of cookies, coffeecake, biscuits and biscuit sandwiches.

The Viroqua-based coffee roasting company is located in southwest Wisconsin in the fabled “driftless” region, not far from the Mississippi River, and specializes in organic, single origin, fair trade coffees. Coffees include the Organic Peru Huabal which, according to the coffee’s page on their website, is straight from the village of Huabal in Peru and high in the Andes. The company also sells merchandise such as brewing gear and pour over kits.

To date the company has been a wholesaler only. This will be its first branded cafe. Look out Alterra!

Kickapoo is partnering with On The Ground on Project Congo. For every pound of coffee sold, $1 will be put towards the promotion of gender equality awareness in the farming regions of the Democratic Republic of Congo.

Kickapoo was also an attendant at The Milwaukee Coffee Guild’s third annual Coffee Festival in September, as we reported.

“We are open ! And ready to sizzle,” their Facebook page notes. “Burger bags and more await you!” You’ll also find their complete menu reproduced there.

The husband and wife previously had a soup restaurant, Uncanny Soup Co., in Cudahy for 12 years and briefly in downtown Milwaukee on Water Street. Now they’re back to Cudahy and serving burgers.

Cudahy Burger Joint has table service and with counter seats at the window, can hold 40 diners. It also offers takeout.

The restaurant serves one-third pound Angus beef burgers ($7.95 to $8.95) on brioche buns, the All American cheeseburger with bacon and the Egg on Your Face, topped with cheddar, ham, a fried egg and truffle mayonnaise.

Other sandwiches include seared meatloaf with gravy ($6.95), pork schnitzel with dill sauce ($6.95) and a Chicago style-hot dog ($4.75). Appetizers include poutine with fried curds and bacon gravy ($8.95) and Sout’ Sider fries ($7.95), topped with pulled pork in whiskey barbecue sauce. Malts, shakes and floats, sundaes and cookies are also offered.

Two weeks ago, we reported that owners Santo Galati and Greg Huber filed an application with the city’s Board of Zoning Appeals to open their restaurant, Santino’s, at the long vacant 352 E. Stewart St at S. Hilbert St. According to OnMilwaukee, the application was approved last Thursday.

The new restaurant will incorporate authentic Sicilian recipes from Galati’s mother, including traditional pizza made in a wood-fired oven. “In my family, dinner was always an event,” Galati told the publication. “My mother was an excellent cook, and all of our problems were solved over dinner.”

Galati hopes to recreate the feel of classic Italian restaurants of the 1930s and ‘40s, complete with a baby grand piano for live music. He believes that the 100-year-old building itself, with its tin ceilings and “quasi-industrial feel,” will contribute greatly to the feel. He’s already found old-time treasures during demolition of the building’s walls, including a 1940s newspaper reporting about World War II.

“It’s as if the building wanted to tell me a story,” he said. “And when I look at the building, I see an old Italian restaurant from New York.” Transplanted to the north end of Bay View.

The restaurant is planned to open sometime in 2016.

On Monday, owners Brooke Boomer and Sarah “Smith” Nelson opened the second location of their Ruby Tap bar at 6000 W. Mequon Rd. in Mequon, according to OMC.

The bar will feature up to 32 kinds of self-serve wines along with eight tap wines and two kinds of beer. The bar is also serving a draft cocktail known as the Bee’s Knees, featuring gin, raspberry, lemon and honey. The kitchen is receiving an expansion and includes charcuterie, cheeses, flatbreads, truffle popcorn, olives and more.

The bar features drink specials, which include (whew) sparkling wines and popcorn on Mondays from 5 to 8 p.m., $1 off full glasses on tap Tuesdays, 25 percent off wine pours from wine machines on Wednesdays from 4 to 6 p.m., no corkage fees on Thursdays, $5 off wine carafes on Fridays from 4 to 6 p.m. and $3 mimosas on Saturdays from 1 to 3 p.m.

The Mequon location is 500 square feet larger than the Wauwatosa location at 1341 N. Wauwatosa Ave. (clearly the bar has a penchant for being on streets named after the cities in which its located).

Bradford Shovlin, executive chef at the Iron Horse Hotel, confirmed last week to the Milwaukee Journal Sentinel that he will be leaving the hotel after the holidays. Shovlin also runs the hotel’s fine-dining restaurant known as Smyth and oversees other parts of the hotel’s food service. The Detroit native told the newspaper he plans to return to Michigan but hasn’t decided on his next move.

Smyth was twice listed in Carol Deptolla’s Top 30 List while under Shovlin’s direction. He also helped open the restaurant at the Charmont hotel in La Crosse and worked in Chicago with chef Bruce Sherman at North Pond and at chef Suzy Crofton at Crofton on Wells.

A new Sendik’s along with new restaurant and retail options will soon make their way to Miller Park Way. The Milwaukee Business Journal reports that Mequon developer and Devo Properties principal Greg Devorkin closed a $2.85 million deal on an acre of land at 4200 W. Burnham St. in West Milwaukee. On that land, he will develop a 41,000 square foot Sendik’s along with space for two other tenants.

Devorkin told the Business Journal that the new Sendik’s and two tenants will fill a void in the neighborhood.

“They need another option for a different type of grocer, and they need another sit-down restaurant, which is what we’re going to be providing,” he told the publication.

In late January, the currently vacant building at 5501 W. State St. will house the Kettle Range Meat Co. butcher shop as well as a USDA inspected meat processing facility. The space will feature ethically raised and humanely slaughtered meats including grass-fed beef and other free range-raised meats – all free of hormones and antibiotics – as OMC reports.

The company was founded by CEO and business manager Mark Bearce in fall of 2014 with master butcher Joe Parajecki. After the fall of Black Earth Meats – where Parajecki was a chef and operations manager – two Black Earth shareholders and two animal suppliers contacted Bearce and “expressed an interest in continuing the work Black Earth began,” he told the publication.

By last February, after a collaboration with many small meat processing and packaging facilities along with longtime farmer Brian Bradley of Denmark, the company began selling its meats at farmer’s markets around the Milwaukee area. And by last June, they created a Buyer’s Club offering monthly packages of their meats both available at pickup locations and delivered straight to your door in this region.

The company’s partners are currently working on getting USDA certification to convert the first floor of the butcher shop’s building into a meat processing facility. Afterwards, they’ll start selling custom cut meats both frozen and fresh along with sausages, smoked meat products and a small selection of complementary products for both regular customers and Milwaukee restaurants. There will also be a window from the butcher shop for a view of the meat processing space and dry aging room, which we’re guessing will put Paul McCartney’s glass slaughterhouses theorem to the test.

If you can’t wait to get your hands on the company’s meats, then you can visit their website and browse their selection of meat collections and gift boxes as well as the Buyer’s Club.